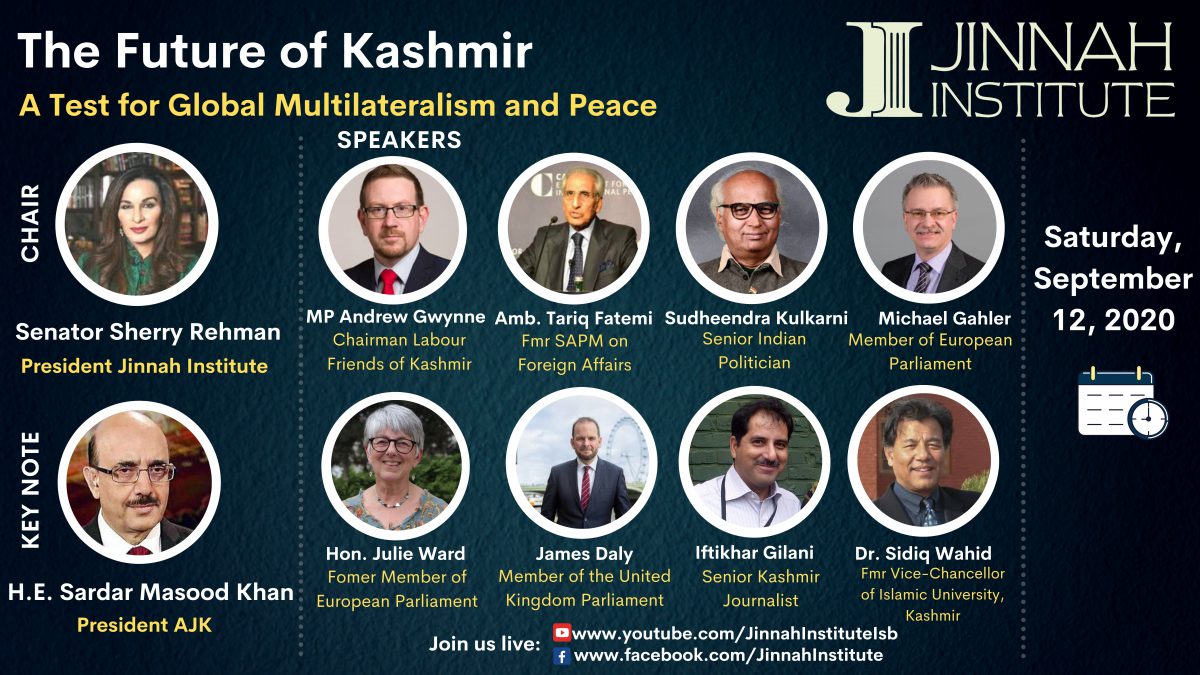 The Future of Kashmir: A Test for Global Multilateralism and Regional Peace

“They (the Modi government) have a concerted plan to tell Kashmiris that what they want is inconceivable and that Pakistan is not in a position to help,” explained Iftikhar Gilani. “Our (Kashmiri) history, language, is being erased. The economy and local industry has suffered immensely because of the lockdown and connectivity breakdown.” According to him, Indian attempts to paint the indigenous freedom movement with the broad brush of militancy and terming it foreign funded was a clear deflection of responsibility. Kashmir was a tinderbox that could “go off at any time”.

Ambassador Tariq Fatemi highlighted how India had reneged on U.N. resolutions and bilateral commitments with Pakistan in handling this issue. All Pakistani leaders, both civilian and military have attempted to resolve the Kashmir question, but India in response has only “unleashed terror and genocide” in the restive region. There are advantages to dialogue and economic interdependence, but this understanding must be present on both sides of the border to find a resolution.

MP Andrew Gwynne of the United Kingdom’s Labour Party emphasised that Kashmir is indeed an issue that requires global attention, and that Britain has an obligation to be involved because of the manner in which it withdrew from the subcontinent in 1947.  He further added, “Britain also has a moral role to play as a member of the UN Security Council. This issue threatens regional security, and the world cannot allow two nuclear states to enter into a conflict.”

Participants agreed that it is imperative to take into consideration the wishes of the Kashmiri people before any solution can be reached since they are the principle stakeholders of this issue. “The final resolution must be one that has the approval of the Kashmiri people. Justice for the people of Kashmir has to be paramount for the international community,” stated MP Andrew Gwynne.

MP James Daly from the U.K. Conservative Party agreed with his Labour colleague and other participants on the significance of recognising the inalienable right of self-determination for oppressed Kashmiris. “The voice of the Kashmiri people remains unheard.” He detailed on his experience in visiting AJK in February 2020 and how his delegation was granted access to interact with all sorts of sections of both the public and government in order to ascertain the situation on the ground. “We were treated with complete openness (in AJK).”

“Unfortunately, our group was not let into India. We were not able to speak with the Indian government in a free and open manner.”

Former BJP politician Sudheendra Kulkarni believed that the acrimonious relationship between Pakistan and India was a remnant of the partition and its aftermath. The abrogation of Article 370 was unconstitutional and unjust, and has transformed the Kashmir issue to one now involving three states; Pakistan, China and India. “The abrogation is a wrong, and one that has to be rectified,” he said.

Former MEP Julie Ward also detailed the importance of raising this issue at all international forums; it was currently noticeable in its absence at such meetings of international importance. MEP Michael Gahler added that it was important for international observers to gain access to IIOJK in order to truly sift fact from fiction from a neutral perspective. He went on to add, “One has to address the situation on the ground regarding violence against civilians and the impact of the lockdown on local Kashmiris through bilateral and multilateral talks.”

President AJK, Sardar Masood Khan observed that the future of Kashmir “seems very bleak if the international community does not intervene.” The on-ground situation was nothing other than a foreign occupation with the fascist Hindutva agenda as the “driving force behind the annexation”.

He detailed the attempts of the Modi government to bring about a demographic change in IIOJK, and went on to dismiss claims of terrorism and Pakistani involvement in the indigenous freedom movement. Furthermore, he put forth proposals to move towards a resolution on the Kashmir issue, which included the need to start an international human rights movement, reaching out to members of Indian civil society and politicians that are concerned about the situation in Kashmir, and appealing to E.U. and U.K. parliaments to focus more sharply on the IIOJK issue before it was too late. President Sardar Masood Khan also drew parallels between AJK and IIOJK; the former was free with all civil liberties intact, while the latter was the reason for conflict in the region and losing its own citizens at the hands of the Indian security forces. He stressed the need to continue bringing this case up in front of the U.N to spur the international peacemaking body into action.

In her closing remarks Senator Rehman stressed on the urgency of initiating a discussion on the just and conclusive resolution of the Kashmir issue. “As it stands, Kashmiris feel that the international community has forgotten about them while their lives and identities are at risk. The Modi regime’s motive behind the demographic change is also likely based on the possibility of a plebiscite being held in the future, by which time the people of Kashmir will be swamped by votaries of the ultra-national Hindutva regime. Their future and their UN mandated. rights to choose how they are governed is at stake.”

Follow the link to watch a recording of the full webinar: