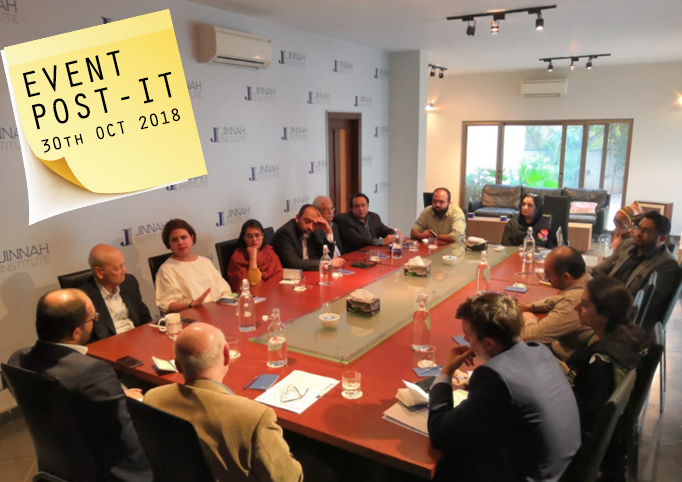 Participants discussed Pakistan’s track record of taking its cues vis-a-vis connectivity from regional and global powers, molding its role to reflect connectivity priorities of other countries. It was felt that Pakistan has always viewed itself as a gateway, its vision restricted to collecting toll and accommodating other countries in their trade activities. It was agreed that Pakistan must think of connectivity from its own perspective taking on a role that reimagines connectivity as trade not just in goods but also in services, ideas and people. Participants also suggested that rethinking connectivity from a geographic perspective is important because connectivity should not be restrained by Pakistan’s geostrategic compulsions. The significant progress made by African countries in regional trade and commerce despite a history of entrenched conflict was discussed as an example of ways in which commerce and be unbounded from Pakistan’s pervasive geostrategic limitations.

In a bid to establish itself as more than a gateway country, Pakistan must look inwards and engage in retrospection as to what it can offer the world. Participants argued that Pakistan was presently unable to compete globally due to lack on investment in a competitive labor force or export-competitive industries. The participants agreed that the country must shift its focus from a purely security led approach to public policy to one that works towards the betterment of its people. The country must invest in ventures that have long term results, such as education and vocational training to improve the labor force and support for innovation in local industries to make them internationally competitive. It is only after Pakistan has commercial advantage can it reposition itself from a gateway country to an important trading partner.

When discussing Pakistan’s opportunities for trade in the region, particularly with its neighbors, the participants agreed that security driven approaches to bilateral relations have limited Pakistan’s long-term economic interests within the region. India, Afghanistan and Pakistan were all criticized for losing opportunities for improving relations due to other unrelated issues, and opportunities for delinking trade discussions from political issues were discussed and pushed for. It was decided that these countries must strive towards working towards the betterment of their citizens rather than serving elite interests and getting embroiled in futile political disputes.