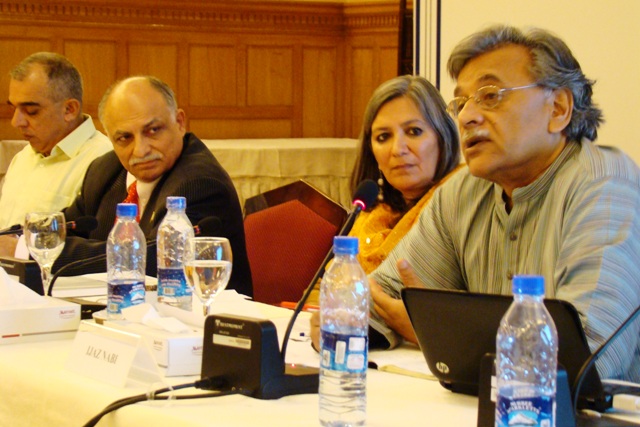 Islamabad, June 4, 2012: Water is going to be the dominant concern in bilateral in talks between India and Pakistan and the cases of Baglihar and Kishanganga have greatly altered the dynamic on water. This was the view of delegates participating in the Islamabad Dialogue II, an Indo-Pak Track 2 conference organized by Jinnah Institute and Centre for Dialogue and Reconciliation. The water crisis is hard to exaggerate in the Indus Basin, given the heavy dependence on irrigated agriculture in Pakistan and India. Participants held that water stress presents serious challenges for growing population needs, industrialization and development in the Basin. The group stressed that a demand efficiency focus needs to be developed and debated, as opposed to a supply oriented view. Further, India and Pakistan  need to cater to the ecological and environmental changes that are taking place in the region.

The conference was attended by high profile policy experts, former diplomats, members of the media and academic communities from both sides. In a session on bilateral relations, participants stated that now was a watershed moment for both India and Pakistan. The group noted that while there had been very positive developments on trade, much more needed to be done to curb the rising tide of extremism within both countries and to contain the violence threatening to spill out of Afghanistan in the lead up to ISAF/NATO withdrawal in 2014. It was stated that both India and Pakistan should find common cause in addressing governance challenges, particularly in the provision of citizen entitlements. It was pointed out that a challenge for any Track 2 discussion is to be able to influence the official dialogue between India and Pakistan.

Participants noted with satisfaction that Track 2 had achieved success in the field of economic integration and trade with India. Participants agreed that Indo-Pak trade needs to look at regions and sub-regions in an attempt to connect both sides of Punjab, Sindh with Gurjarat and both sides of Kashmir. The conference delegates debated the ways in which trade integration was affecting small manufacturers under a liberalized trade regime, non-tariff barriers and improvement of commercial infrastructure.

A session on healthcare was held in an attempt to diversify the bilateral agenda and to include subjects that are usually neglected. The conference included working group sessions on the bilateral process, Kashmir, water security, healthcare and trade integration, which produced policy recommendations