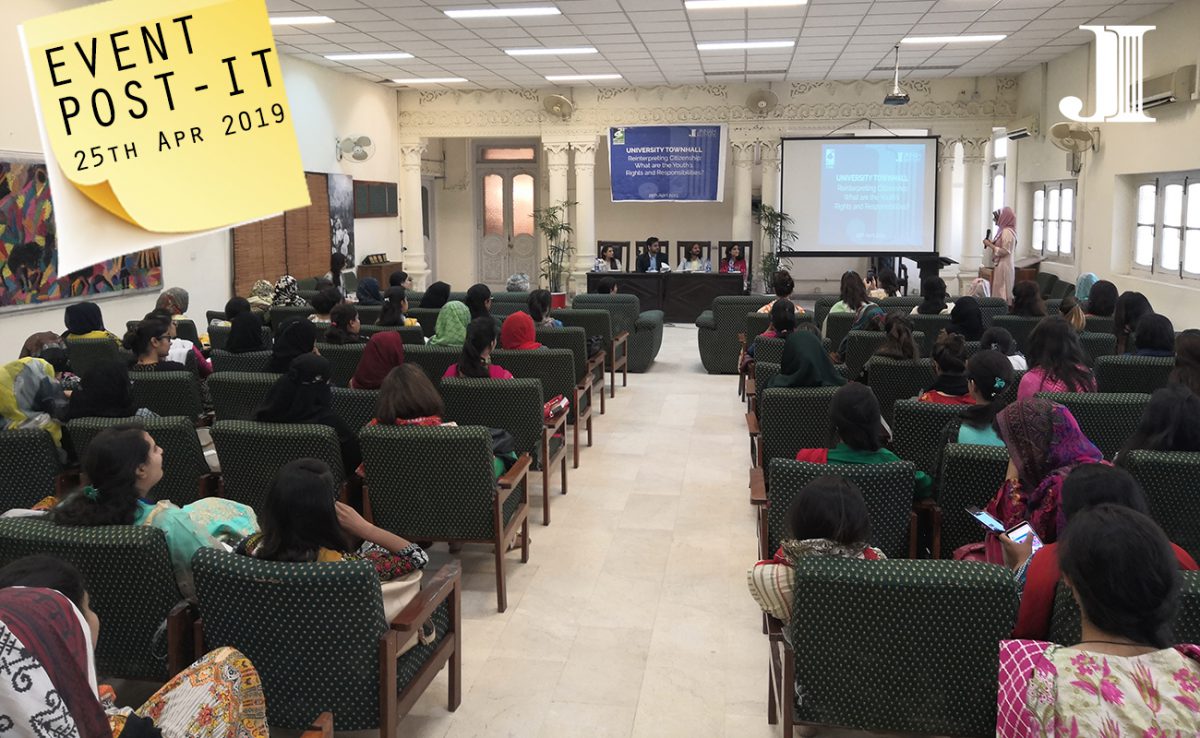 Reinterpreting Citizenship: What are the Youth’s Rights & Responsibilities?

How effectively do youth voice their concerns and agitate their causes with decision makers? How many young people want to actively take part in politics? Are Pakistani youth actually agents of change? Panelists posed these questions to students at the Fatima Jinnah Women University, and triggered a lively debate.

Benazir Shah, features editor at GEO TV, shared statistics from national legislatures and stated that only four out of 342 seats in Pakistan’s parliament are occupied by persons under the age of 30, whereas the country’s demographics have consistently shown a growing youth cohort since a decade, now estimated to stand at 60 percent of the total population. She added that 27 percent Pakistani women are considered part of the workforce, whereas women’s participation and contribution to the economy is far larger than that. She asked young people to make their voices heard and demand political, economic and social change that aligns with their aspirations and realities. Shah felt that social pressures and expectations become a major obstacle in young women’s professional growth, and talented young women are compelled to choose marriage over a career.

Television anchor Amber Shamsi stated that professional space has to be fought for in a country like Pakistan, where harassment, sexism and misogyny are very common at the workplace. She stated that youth, especially young women, will find that their voices resonate better if their demands are made collectively. “The view that women undercut other women is extremely prevalent in Pakistan, but I have tried and tested this to be untrue. Women build each other up and provide support like male colleagues or counterparts never do,” she observed. Addressing a question regarding the recently held Aurat March in Pakistan, Shamsi stated that young people need to show up to champion their own causes and create new modes of activism. The rights and privileges the youth enjoy today, including civil and political rights, are the result of decades’ long activism led by women.

Former MNA Malik Uzair highlighted human development indicators on youth in Pakistan and reminded the audience that an excess of human resource can transform into a major challenge for decision makers. Uzair stated that the responsibility to invest in young people rested with the state, and recounted several youth-oriented interventions that governments had undertaken during the last decade. He also reiterated that political parties must reform their agendas to include a larger mandate for young people if they want to reflect the aspirations of a young population. This requires a larger presence of women, young people and other marginalized communities in legislatures and other key institutions. Uzair also observed that the youth’s mindset is created at a young age, and educational institutions must carefully invest in character building and exposure to socio-political phenomena, without which we should not expect young people to add value to the political systems they inhabit.