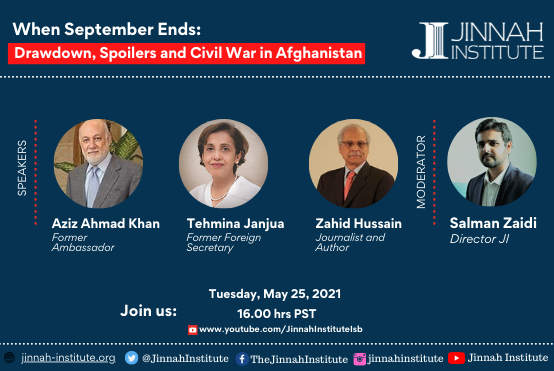 When September Ends: Drawdown, Spoilers, and Civil War in Afghanistan

With the upcoming withdrawal of US and NATO forces timelined for this year, experts are concerned about a civil war ensuing in Afghanistan as violence continues to rise. The trend of violence has led some to believe that a civil war may already have started. In her opening remarks, former Foreign Secretary Tehmina Janjua outlined two possible scenarios that could play out once the US troops depart: an ideal one, whereby the peace process concludes with a lasting agreement that paves the way for enhancing connectivity and trade linkages in the region; and a ‘dreaded’ scenario with a “return of the 1990s” where violence ensues and external actors fill in power vacuums. The second outcome will exacerbate the ongoing suffering of Afghan citizens, and have an adverse spillover effect across the rest of the region. Amb. Janjua felt that the rhetoric coming from Kabul is distinctly unhelpful as it keeps placing the onus of peace on external actors, particularly Pakistan, which has maintained a steady, neutral stance. President Ghani must acknowledge that the responsibility lies with internal actors in Afghanistan to reach a compromise, and that Pakistan can only play the role of a facilitator, if needed.

Tehmina Janjua further highlighted the threat posed by spoilers such as ISIS that continue to operate with impunity in Afghanistan. She saw that Indian strategic thinkers retain the mindset that a return to the 1990s will keep Pakistan’s border areas unsettled. Additionally, key questions relating to a possible interim government, power sharing, and women’s rights remain to be addressed with clarity before an agreement can be reached. Another outstanding challenge is the need for the Taliban to formulate an inclusive vision for all communities and groups in Afghanistan.

The dreaded civil war scenario must be avoided as Afghanistan cannot afford to lose another generation to violence. If the current surge of violence continues, the many gains in democratic governance and citizens rights could be reversed. Ambassador Aziz Ahmad Khan stated that a return to a 90’s-like scenario is a very real possibility. He recalled that the entire international community abandoned Afghanistan after the Soviet exit, and it was only Pakistan that remained engaged with its neighbour. At one point, Afghanistan was divided between about 400 different warlords; these were conditions which enabled the rise of the Taliban. Therefore, in order to avoid a repeat of history, the entire international community needs to play its part in ensuring stability in Afghanistan. He added that the Taliban too have evolved as a group over time and have learned hard lessons.

The progress of the intra-Afghan dialogue has been “glacial” as the two sides have not even agreed on a minimum common agenda yet. While the Taliban act as a monolith, there remain many internal divisions on the government’s side, explained Ambassador Khan. All regional actors including China, Iran, Russia have a role to play, whereas Pakistan must continue to persuade the Taliban that the return of an Islamic Emirate will not be possible again. He added that Islamabad must demonstrate strategic patience, and choose persuasion over belligerence in dealing with the warring factions. However, this responsibility cannot be Pakistan’s alone to bear.

On the status of the peace process and extent to which the Taliban are engaging with Islamabad at the moment, senior journalist Zahid Hussain pointed to the military strength of the militant group, which allows them maximum strategic leverage at the negotiating table. The Taliban are securing whatever concessions they can before the US troops leave, possibly even the release of remaining prisoners and removing travel bans for its leaders. Playing their cards shrewdly at the negotiating table, the Taliban have so far provided no clarity on whether they will be part of a coalition government, partake in elections, or agree to an interim political arrangement.

Zahid Hussain saw that fighting will likely intensify in what seems to be an ongoing civil war. The ANSF’s future is of primary concern, especially if they can remain integrated without the support of foreign forces, and secure the civilian population. He highlighted Pakistan’s long-standing reminder to the US that there was no military solution to this conflict. For over two decades, Pakistan has borne the brunt of the war, and will have to respond once again as violence flares up across the border and refugees from the northwest pour in.

Zahid Hussain echoed Ambassador Khan’s concerns regarding the lack of consensus that exists within the Afghan government. He noted that the government seems to be divided over whether the US should withdraw, the timing of the withdrawal, and if they should be holding talks with the Taliban in the first place.

Should a civil war unfold in Afghanistan, it will adversely impact Pakistan, added Tehmina Janjua, and recommended that Islamabad should be prepared for worst case scenarios. The Kabul government enjoys very limited control and the absence of a peace agreement can therefore become very problematic. Escalating conflict is a red flag for Pakistan as militant groups such as ISIS and the TTP may become emboldened by the withdrawal of foreign forces. With a surge in violence, Pakistan will have to explore ways to insulate itself from terror groups operating along the border. Moreover, insulating ourselves will hurt the Afghans more than the Pakistani citizens, she warned.

If Afghanistan is only ever seen as a product of international brokerage, it may be argued that the role of the US is limited to “chief financier and convener”, now ceding space to China to assume this leadership. Aziz Ahmad Khan emphasized China’s role in the region and beyond; its resources will help Afghanistan, but the manner remains to be seen. In the past, China helped Afghanistan develop a central telephone network, and may provide similar support for social infrastructure. Ambassador Khan further echoed that ensuring peace and stability in Afghanistan was the responsibility of the international community as a whole. The US has spent large sums of money on the ANSF, but the Taliban have continued to go from strength to strength on the battlefield. Since the US is largely responsible for the current Afghan situation, it must continue providing financial assistance to support the country. In the absence of such assistance, desertion rates within the ANSF will increase significantly as the surge of violence continues, he warned.

Concluding the session, the panelists discussed Pakistan’s national security capacity to cope with Afghanistan’s civil war scenario. Zahid Hussain stated that spoilers will continue to sabotage the peace deal in spite of an agreement between the Taliban and the Afghan government. The TTP continues to operate in Afghanistan, and presents a serious concern that Islamabad must take up with Kabul. The restoration of an Islamic Emirate is not in the interest of Pakistan, and Islamabad must maintain ties with all other groups in Afghanistan simultaneously to demonstrate a neutral stance.