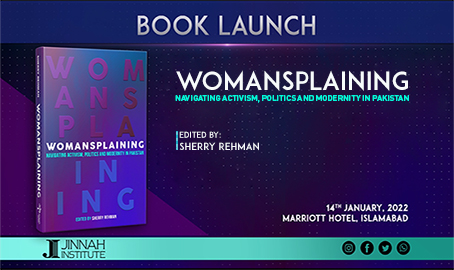 Politics is about remaining an interlocutor for voiceless people, holding their hand and representing their story. The ‘silent pandemic’ that rages simultaneously with COVID is about violence against women, whose stories do not reach those who can take action, stated Senator Sherry Rehman at the book launch for Womansplaining: Navigating Activism, Politics and Modernity in Pakistan. The book is a compilation of essays by leading women activists, academics, mediapersons and policy experts and has been edited by Senator Sherry Rehman.

She stated that this book emerged in response to questions about the women’s movement in Pakistan, which has a long a proud history. Women groups have struggled against dictatorships, draconian laws and discrimination against minorities since the early days, but much of this history is unknown to a new generation of activists. She stated that women have always emerged as Pakistan’s best face forward in times of tumultuous political change. But a persistent and growing trendline of disadvantage and discrimination throws up a harsh counterfactual to the motivating success stories. Knitting these skeins together is the complex, long, often untold tale of women who think, speak, act and give up a part of their comfort zone to push the rights agenda, to take on the architecture of patriarchy and extremism or to call out resurgent misogynies.

Speaking at the event, prominent human rights lawyer Hina Jilani stated that women’s rights must not be seen in isolation; they come at the heart of a struggle for democracy, rule of law, dignity and equality for all people. She stated that citizens themselves hold the power to confront and demand entitlements from states that compromise fundamental rights at the altar of national security. The state has made such choices in the past, and may do so again. The space for civil society movements, and even rational debate, has been constrained in this pursuit.

TV anchor and journalist Asma Shirazi stated that misogynistic language is used to marginalize and disempower women. The usage is sutble and puts women in a subservient frame where they are victims and need to be patronized. Their narrative is never bold as that unsettles patriarchal delimitations within language. Whereas throughout history, women have made the loudest call for human rights and justice. This book allows women to develop their narrative themselves.

Former Senate Chairman, Reza Rabbani commended the authors for their valuable contributions in the book, and stated that Pakistan’s policies had not always favoured marginalized groups, especially when it came to national security policies. The announcement of the latest National Security Policy also reflected a state posture that was not inclusive towards all citizens. The pursuit of peace and democratic governance required that women’s voices were heeded.

Author and poet Harris Khalique stated while moderating the event that the book is seeks to provide testament and context to women’s activism through the lived experience and voices of pioneers who not just headlined the rights struggle in Pakistan, but also gave it intellectual meaning and moral quest. In this endeavour, this book looks to capture a repository of important voices in order to create a slice of memory. The second idea motivating this collection is to probe the connection between the fairly coherent movement of the 1980s to the post-millennial activism that is challenging norms and pushing the boundaries of patriarchy today.