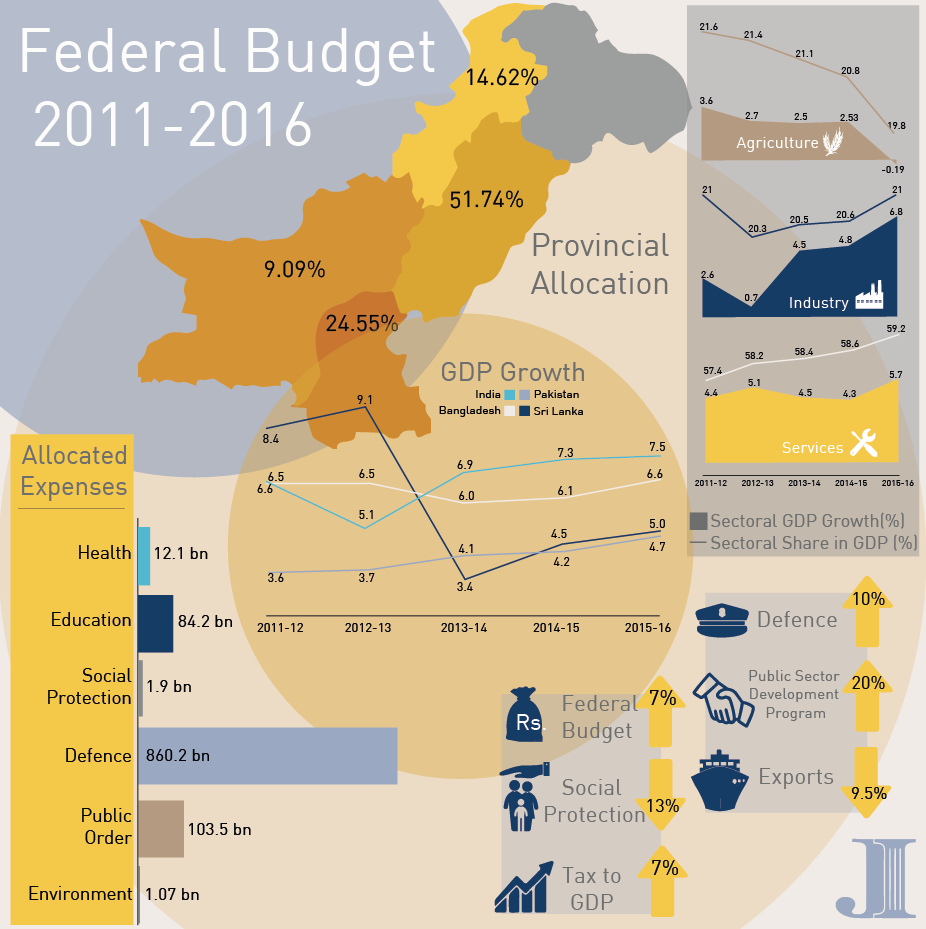 Finance Minister Ishaq Dar recently unveiled the federal budget for the fiscal year July 2016 to June 2017, with a total outlay of Rs. 4.39 trillion indicating a 7% increase over the preceding year. Opposition parties have noted the inequitable provincial distribution of the budget, which has been allocated as follows: Punjab, 51.7 per cent; Sindh, 24.5 per cent; Khyber Pakhtunkhwa, 14.6 per cent; Balochistan, 9.09 per cent.

The government has set an ambitious growth target at 5.7 per cent for the next fiscal year. According to the Economic Survey of Pakistan, the GDP grew by 4.7 per cent in the current year, catalyzed by a 6.8 per cent growth in industry. Improvements in the delivery of energy and distribution of electricity contributed to the highest GDP growth that Pakistan has seen in eight years. However, the government has consistently failed to meet growth targets set out in federal budgets.

The Federal Board of Revenue recorded Rs. 3.1 trillion tax collection during the current fiscal year. The new budget indicates a tax revenue target of Rs. 3.6 trillion and non-tax revenue target of Rs. 0.96 trillion, aiming to push the tax-to-GDP ratio over 7 per cent. By curtailing expenditure and increasing taxes, the budget deficit target has been set at 4.3 per cent of the GDP this year.

The high share of the defence budget as a percentage of GDP is indicative of its burden on the national economy. Rs. 860bn has been allocated for defence services expenses, reflecting a 10.3 per cent increase from last year’s defence budget which stood at Rs. 780bn. The budget has been consistently increased over the last five years, keeping in view the security challenges faced by armed forces, anti-terrorism and anti-militant operations nationwide. The majority of the defence budget has been allocated to the Pakistan Army, the Air Force and Navy, while the rest has been distributed between employee-related expenses and operating costs.

Health and education, although considered ‘social sectors’, are key determinants of long-term sustainable economic growth. A budget that looks at the education and health needs of an entire population for a fiscal year requires updated estimates of population numbers and demographic distributions to allocate adequate funds, which Pakistan currently lacks. The budget allocated to education services this year is Rs. 76 million less than last year, maintaining the education budget at approximately 2 per cent. The health sector has been allocated Rs. 12bn for the next fiscal year, decreasing significantly from the Rs. 20bn allocated prior.

Agriculture accounts for 20% of the sectoral share of GDP, however its contribution to GDP growth this year decreased significantly. The new budget provides tax and duty concessions of Rs. 15bn for the agriculture sector, decreases prices of fertilizers and allocates Rs. 1bn to the Credit Guarantee Scheme for small farmers. Further, the budget indicates concessional electricity tariff to be reduced on off-peak agricultural tube wells, reduces duty on import of machinery for the livestock and poultry sector, and removes sales tax (previously at 7 per cent) on pesticides.

In the fiscal year 2015-16 Pakistan’s net deficit on trade in services decreased by 19 per cent. Exports fell by 9.5 per cent, particularly due to the decline in textile, sports goods, basmati rice and leather exports. While the international decline in oil prices saved the government substantial resources previously allocated to petroleum imports, a rise in raw cotton imports, mobile phones and automobiles indicated a higher net deficit on balance of trade this year in comparison to last. The share of manufacturing in GDP is retained at considerably low levels and warrants institutional attention.

The government claims to have revived Pakistan’s economy. However, lack of investments in education, health and domestic manufacturing coupled with weak export platforms continue to threaten Pakistan’s economy. In the absence of a census, it is difficult to deliver a sustainable budget that reflects updated demographics, population numbers and distribution in determining financial allocations.