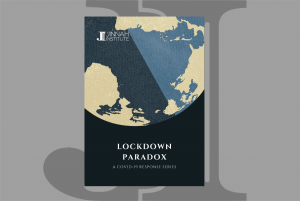 The challenge thrown up by Covid-19 to lives and livelihoods is among the most serious facing Pakistan in recent times. While the country has experienced colossal natural disasters in the past, large parts of the country and the economy remained fairly insulated from the after-effects of those events. The health as well as economic shock from Covid-19 is of a different order of magnitude, however.

In dealing with the crisis, hard choices have been imposed on government and society – none more impossible and Hobsonian than the ‘forced’ trade-off between lives and livelihoods. This issue treads complex social choice questions that are inter-generational as well as involve income and power inequities within society. To complicate the societal and policy response, there are no ‘smart’ options given Pakistan’s institutional atrophy and weakened state capacity that preclude the fundamental building blocks of any ‘smart’ response: surveillance, mass screening and testing, contact-tracing, ability to enforce quarantines, etc.

While in the short run, the trade-off between lives and livelihoods appears to hold, in the longer run it is a false choice. A key consideration in determining any early easing of the virus-suppression strategy (with lockdowns being one element) is the impact on wider economic activity if the critical-care component of the country’s health system is overwhelmed due to morbidity associated with an unmitigated rise in confirmed Covid-19 cases. Will the economy be able to function ‘normally’ with a simultaneous raging, protracted national health emergency?

A principal lesson from the Spanish influenza epidemic of 1918-19 is that US cities that undertook aggressive, up-front suppression measures saw an earlier and stronger rebound in their economies, compared to those that did not. The economy will unfortunately follow the path of public health – it cannot operate in parallel or in isolation.

What are the options to deal with the economic fallout? Given the nature of the crisis, fiscal ‘stimulus’ measures are misplaced in the short run. The immediate near-existential challenge on the economic front is not about creating new jobs but retaining existing jobs and businesses. With the economy expected to contract around 1.5-2 per cent in FY21, the loss of output from the pre-crisis baseline is approximately 5 per cent of GDP. In exceptional circumstances as these, the government should step in and cover this loss of output to a substantial extent. That means the size of the government emergency package should be at least 2.5-3.0 per cent of GDP – instead of the announced package half that size.

To support businesses, they should be offered long-term interest and collateral-free loans backstopped (guaranteed) by SBP to keep businesses afloat and payrolls flowing. The government should suspend collection of fixed and advance/minimum taxes for a period of 3 months at least, while waiving a portion of utility bills due from businesses as well as households. The standard GST rate should be lowered, and there should be a greater pass through of collapsing international oil prices to domestic consumers. These measures will also partially insulate household incomes in these difficult times. The most at-risk segment of the population should have access to expanded safety nets, such as a greatly augmented Ehsaas Kifalat program.

How will the government pay for these measures? Firstly, it will have to negotiate a suspension of IMF program conditionality for one year at least. Lowering interest rates together with seeking debt relief from multilateral and bilateral creditors will save hundreds of billions of rupees in the budget. Re-appropriation of development allocations under the PSDP/ADPs, away from longer gestation and low priority sector projects (such as highways, airports, new power projects, etc.) for the next 1-2 years, and a claw-back/imposition of windfall profit taxes on banks, IPPs, sugar, and the LNG terminals should also yield much needed fiscal resources.

Finally, the government should consider borrowing any short fall directly from the central bank. With a strong disinflationary environment underway, this is no time to be wedded to orthodoxy. At the same time, SBP should suspend its ill-conceived move to inflation-targeting at a time when the country will desperately need a growth prop going forward.

Sakib Sherani is a former member of the Prime Minister’s Economic Advisory Council, and heads a macroeconomic consultancy based in Islamabad.