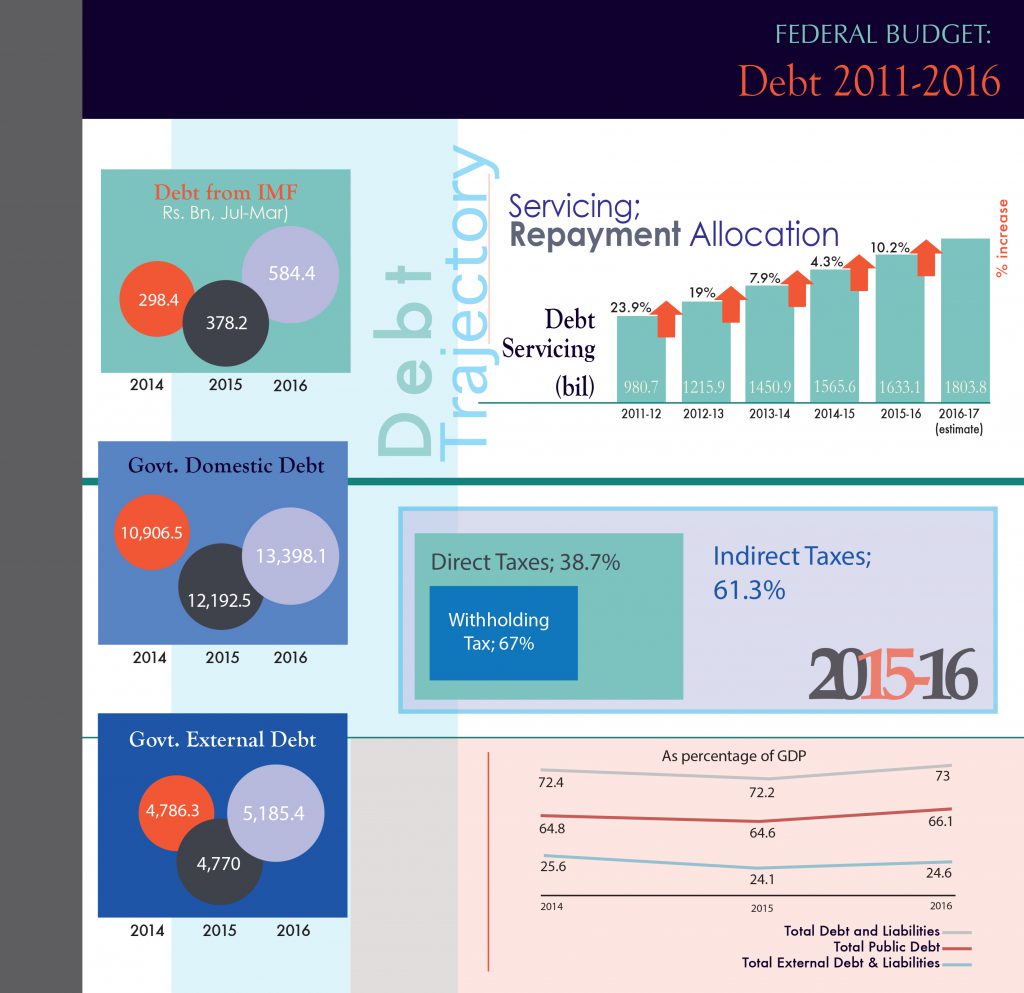 The federal government’s economic policy remains largely debt-driven, with debt servicing and repayment taking increasing shares of the federal budget each year. The inflationary impact of debt accumulation has been ignored for short-term financial stability.

With the IMF programme drawing to a close and earlier debts maturing, budgetary allocations for debt servicing and repayment have seen a steady rise over the last few years. For fiscal year 2016-17, total debt and liabilities have increased by 12.7 per cent, now making up 73 per cent of the GDP. Compared to the previous year, there has been a 12.4 percent increase in the total debt stock during July-March FY16. Given some discrepancies between numbers reported by the Ministry of Finance and the State Bank of Pakistan, data from the latter has been used for this infographic.

Total public debt continues to be well above the 60 per cent cap set under the Fiscal Debt and Responsibility Act of 2005, while debt from the International Monetary Fund increased by 54.5 percent. With high amounts of accumulated debt, low interest rates have mostly benefited the government. According to revised estimates for the outgoing year, foreign loans repayment and servicing of external and domestic debt collectively stood at Rs.1.63 trillion. However, the allocated amount for FY 2016-17 indicates a 10 per cent increase.

On the revenue front, targets set by the government have been largely met. While both tax and non-tax revenue targets have been reportedly achieved during the outgoing year, there has been no significant shift in direct and indirect tax shares. Instead, there has been hefty rise in the use of withholding taxes (WHT) to meet revenue needs. This increased reliance on WHT indicates a regressive shift in the government’s tax policy and has added to inflationary pressures. Improvements in the share of direct taxes in overall revenue can therefore be attributed to an incessant rise in WHT, which has steadily increased from 56.2 per cent in 2013 to 67 per cent this year. However, the imposition of WHT in various forms is increasingly being seen as a reliable line of revenue instead of a temporary means of documenting the economy.

Burdened with an inflating debt stock, the federal government is increasingly resorting to regressive measures of revenue mobilization, with little attention paid to expanding the tax base and alleviating poverty through a systemic shift to progressive taxation.

Federal Board of Revenue, Biannual Review 2015-16, available at http://www.fbr.gov.pk/ShowDocument.aspx?Actionid=14548

Federal Board of Revenue, Quarterly Reviews 2015-16, available at http://www.fbr.gov.pk/ShowDocument.aspx?Actionid=14586