State of the Religious Minorities in Pakistan – Christians 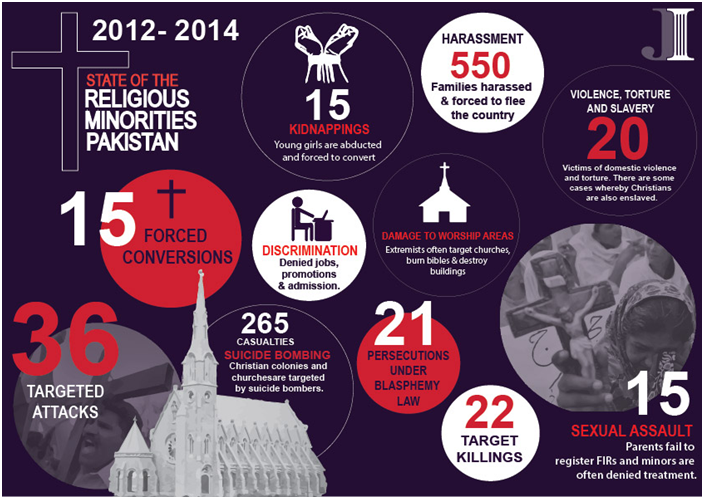 Violence against Pakistan’s religious minorities, including Christians, continued unabated through 2012-2014. Joseph Colony – inhabited by Christians- was torched to the ground in March 2013 after an allegation of blasphemy was levelled against one of its residents. This was followed by a suicide bomb attack in September that occurred in Peshawar outside the All Saints Church, which resulted in over 80 casualties.

In more recent memory, the brutal murder of a Christian couple – Shama and Shehzad – suspected of blasphemy in KotRadhaKishan is yet another manifestation of growing religious intolerance in the country. These cases of vigilante justice are part of a consistent series of attacks against Pakistan’s Christian community as evidenced by other events such as the Gojra riots of 2009 and the assassination of Federal Minister of Minority Affairs Shahbaz Bhatti in 2011.

Persecution against religious minorities is often enacted under the guise of the Blasphemy Law as well as other instances of harassment and discrimination. This has resulted in an exodus of nearly 550 families from Pakistan, according to conservative estimates. Forced conversions, kidnappings, damage to areas of worship, sexual assault and targeted killings all come under the rubric of oppressive practices that minorities are routinely subjected to.

The data presented in this infographic has been sourced from various news outlets and organizations such as Dawn, The News, Daily Times, Pakistan Today, BBC, Reuters, The Nation, Guardian, Express Tribune, Extremism Watch and Jinnah Institute.