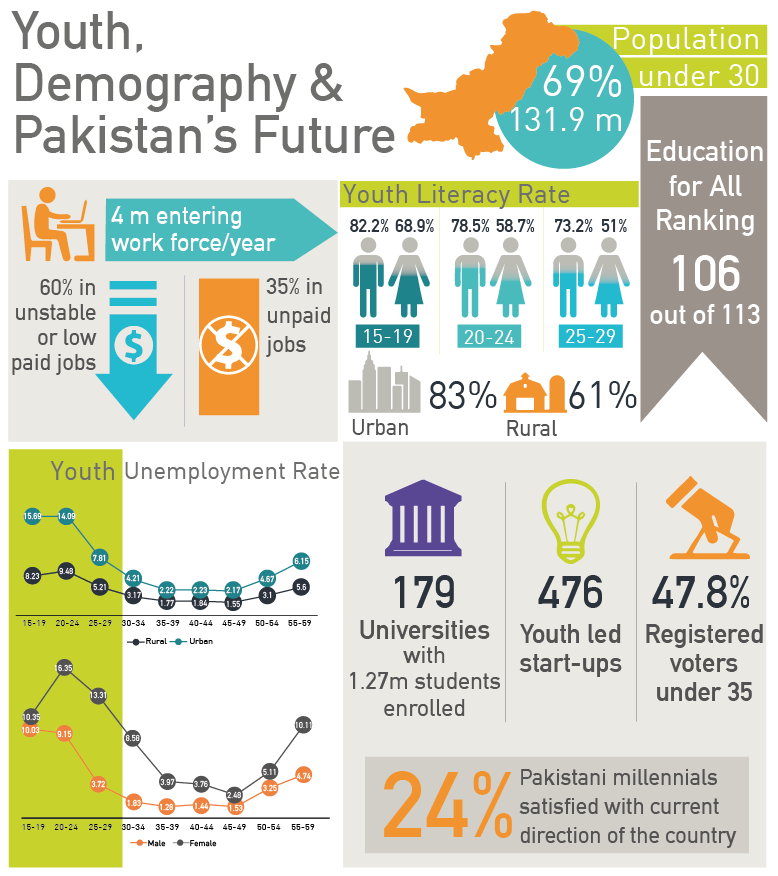 A significant majority of Pakistan’s population comes from the country’s ever-growing youth cohort.  Two out of every three Pakistanis is currently under the age of 30. An estimated 52 million Pakistanis—or 27 per cent of the population –is between the ages of 15 and 29. As an estimated 4 million young people enter the workforce every year and corresponding dependency rates fall, it remains to be seen if Pakistan will be able to cash-in on the country’s youth dividend.

Studies show that one-third of the East Asian miracle growth can be attributed to the demographic dividend. Though Pakistan’s recent progress in economic growth is encouraging, it is certainly behind growth rates needed to sustain the large number of youth entering the workforce every year. To meet this demand, an additional 1.5 million jobs need to be created each year until 2040. However, even from among those who are employed, over 60 per cent are currently in unstable or underpaying jobs, whereas 35 per cent work in unpaid positions. Higher levels of unemployment amongst the under 30 year olds presents additional challenges for Pakistan. Given the delicate political and security situation, the risk of youth becoming demoralised in the face of limited and discouraging employment options remains real.

Twenty-six million children remain out of school. Reports suggest that at the current level of growth, it would take until 2076 to achieve full enrolment rates. Further, the kind of skills imparted by Pakistan’s education system are often unmarketable, and thus prove ineffectual at achieving the true objective of integrating youth into the workforce.  All this has contributed to the emergence of a generation of young people who are prone to frustration and marginalisation.

Nearly 2 million Pakistani students are expected to graduate from higher secondary school (FSC) in the coming two years.  A cursory look at existing universities reveals that most Pakistani higher education institutes do not have the capacity to accommodate this influx of young adults. Pakistan’s university graduates are experiencing high unemployment rates. In addition, only 30 per cent of graduates from technical and vocational institutes are employed in the formal sector whereas a greater percentage are either self-employed or are absorbed into the informal sector at low salaries.

The advent of an increasingly prominent global startup culture can, to a certain extent, help address unemployment and allow youth to directly channel creativity into tangible initiatives. According to a recent report, an Islamabad-based incubator alone has created over 200 jobs since 2012 by facilitating 16 start-ups.  Existing infrastructure, however, does not allow Pakistan to fully explore the potential of youth-led entrepreneurial ventures. In the absence of incubators, start-ups are often unable to raise the capital required to get off the ground. In Pakistan, there are still very few operational incubators with current numbers hovering at about thirty. As a result, existing incubators and angel investors are burdened beyond capacity: a single Pakistani incubator reportedly receives 7,500 new business pitches every 6 months. Despite these hurdles, Pakistan is reported to have around 476 start-up companies to date.

Pakistan’s young adults are more politically engaged than ever, with nearly half of the 84 million registered voters in the 2013 elections aged between 18 and 35. An international report published this year indicates that only 24 per cent of Pakistan’s youth trust the country’s politicians. Further, young people lack opportunities to become active participants in the political process. A three-decade old ban on student unions – an unhelpful remnant of the Zia years –and the overall violent nature of campus politics, means that colleges and universities are no longer the incubators or training grounds for political engagement they once were. Nor do they directly affect the course of national politics.

Pakistan’s youth offers both unique opportunities and challenges. If provided opportunities for growth and development, they can play an integral role in leading the country towards a progressive future. Unfortunately due to constraints and limited financial resources, a vast majority is currently unable to utilise its talents. For this, the government must offer a combination of financing options to young adults so they are able to complete their education and pursue desired career paths. Such initiatives can decrease the burden of unemployment on the economy, as well as contribute to overall growth.