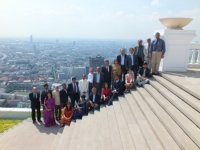 Bangkok, Thailand: Key opinion makers from India and Pakistan, including parliamentarians, former diplomats, military officers, journalists from the print and electronic media, academics and policy experts met in Bangkok for the 11th round of the Chaophraya Dialogue from 18 – 20 December 2012, organized by the Jinnah Institute (JI) and the Australia India Institute (AII).

The Chaophraya Dialogue is an Indo-Pak Track-II initiative jointly undertaken by the Jinnah Institute (JI) and Australia India Institute (AII) to encourage informed discussion of bilateral relations and enhance stakes in peace. The dialogue is primarily meant to give an opportunity to members of the policy and media communities and other groups in India and Pakistan to interact with each other on a sustained basis.

It provided a very useful forum when the official dialogue process between India and Pakistan had ruptured, following the 26/11 attacks in Mumbai. During this period the Chaophraya Dialogue managed to bring together senior interlocutors from India and Pakistan multiple times. The Dialogue encourages participants to share the conclusions of each round with their respective governments.

The participants noted with satisfaction that the resumed Pakistan India Dialogue Process was registering positive movement and expressed the hope that it would continue to make progress towards the solution of all outstanding issues between the two countries. Furthermore, they unanimously agreed to the following:

They noted the headway India and Pakistan have recently made on bilateral trade and economic relations and recommended that Pakistan should grant and operationalize the MFN status to India;
They recommended that a mechanism for resolution of bilateral trade disputes/grievances be created that includes private sector participation from Pakistan and India. Further, both countries should develop the capacity for evidence based dispute resolution;
They recommended an improvement in trade related infrastructure through opening up of more trade routes such as Khokrapar-Munnabao, greater facilities at Wagha-Attari Integrated Check Posts with an increased capacity to handle more trucks at Wagha. Moreover, cross-LoC trade should be enhanced;
They recommended that bilateral trade should be facilitated by availability of banking services and the existing agreement onk opening bank branches should be expeditiously operationalized;
In the area of services, they recommended the following:
Group tourism through accredited travel agents should be facilitated immediately;
Students from India and Pakistan should be encouraged to study in each other’s educational institutions;
Remaining hurdles for facilitating healthcare visits should be removed;
Cross border business related services including Information Technology and skilled manpower should be promoted.
They recommended that bilateral FDI should be brought on par with the most liberal FDI regime in either India or Pakistan;
They recommended that a bilateral committee be set up with representation from the private sector, government and independent experts to monitor progress on the overall bilateral economic relationship and assess implementation of specific measures that facilitate trade in goods, services and investment. It should report annually to parliaments in both countries;
They emphasized that the bilateral economic relationship should not be allowed to be disrupted by security issues.

They encouraged transparency in strategic nuclear matters;
They urged that India and Pakistan should discuss the structure and growth of their nuclear arsenals;kkk
They recommended that nuclear arms control as a means of enhancing understanding, security, stability and the consequent need for verification should be taken up;
They felt there was a need to define credible minimum nuclear deterrence;
They identified the need to discuss measures that prevent the pre-delegation of nuclear launch authority;
They urged that contingencies that potentially lead to nuclear escalation should be addressed;
They urged that India and Pakistan should refrain from missile testing during periods of tension;
They emphasized that measures be taken that can prevent radioactive material from falling into the wrong hands.

With people to people contact underpinning and paving the way for official dialogues in regions across the world, they recognized that broadened people to people contact is imperative for improving Indo-Pak relations;
They felt that the biggest hurdle in people to people contact is the restrictive visa regime. While recognizing security concerns kkkk which have led to this, they welcomed the recent progress on this issue with easier availability of visas for certain categories such as senior citizens, minors and business persons;
They strongly recommended that this be taken forward with the addition of further categories for annual/multi-year multiple entry visas for other categories such as journalists, academics, patients, writers, artists, sports persons, group tourists, etc., who are either accredited or recognized by their relevant national bodies;
To facilitate easy access of visas for the general population, they suggested the exploration of a trusted visitor program along the lines of that implemented by the United States;
To facilitate easier cross border travel, they recommended that steps be taken to increase flight connectivity as well as increasing the number and capacity of land and rail crossing points.