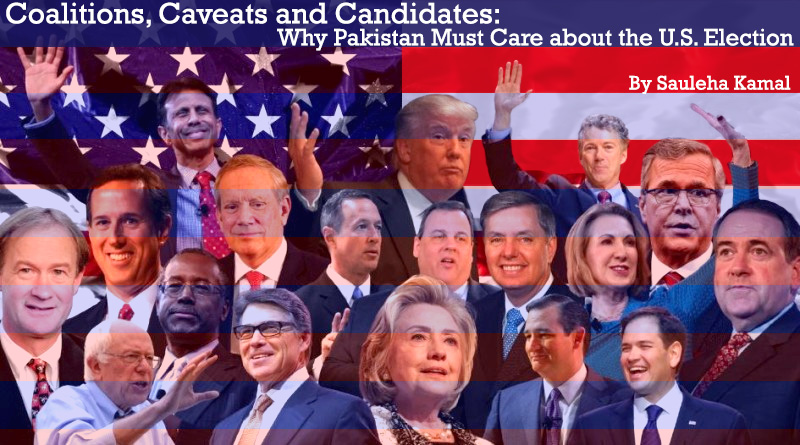 Coalitions, Caveats and Candidates: Why Pakistan Must Care about the U.S. Election

In the past few weeks, the United States has confirmed the sale of eight F-16s to Pakistan in spite of Indian resistance; warned Islamabad about its nuclear weaponry; asked it to “do more” against terrorism even as Pakistan reels from the trauma of another university attack; and begun the re-hyphenation of its India, Pakistan State Department desks. With the security tide in Afghanistan as fluid as ever, and Washington now immersed in a divisive election season, will a new US Commander in Chief usher in change or continuity in Pak-US relations in 2016?

The view from Islamabad is that the US will continue to honour aid commitments while acknowledging that the transactional fundamentals of the relationship are unlikely to change. Washington pundits predict continuity in Pak-US relations, given the foreign policy quagmire that has developed in the Middle East. Yet, challenges remain. While the Pak-US relationship has covered some ground since Pakistan’s first civilian transfer of power in 2013, post-9/11 military Coalition Support Fund payments continue to raise questions in the US Senate, and come with strings attached. Pakistan, meanwhile, continues to fight a difficult inland counterinsurgency operation with little tangible international support. Other security-related assistance has fallen from $1.2 billion per year in 2010-2011 to $300 million.

The American presidential election should matter very much to a Pak-US relationship only recently recovered from the ups and downs of a trust deficit-checkered history. Is the current impasse a new normal or a fleeting moment? This election season comes at a time when US aid to Pakistan is already being hotly debated; indeed news about the F-16s came after prolonged—and often hostile—deliberation from Congress. It remains to be seen if a new administration will continue CSF and CT fiscal support to Pakistan.

A clearer picture of what has been called the most unpredictable US election, and its foreign policy ramifications, is emerging now that that the first few primaries – Iowa, New Hampshire, Nevada and South Carolina –are over. Former Secretary of State Hillary Clinton now faces stiff competition from Vermont Senator Bernie Sanders for the Democratic Nomination, while business magnate and reality TV star Donald Trump maintains his lead over Senators Ted Cruz and Marco Rubio for the Republican nomination.

Whichever candidate is elected president, it is unlikely that he or she will ignore the many pieces that constitute the Pak-US puzzle. Possible revisions to a timetable for the Afghan pullout notwithstanding, counterterrorism is likely to remain the most dominant lens through which Washington views Pakistan and its geopolitical significance. Right now, Pakistan is fighting one of the largest land battles of modern times without outside support. Indeed, the military assistance coming through is hardly sufficient to make up for the socioeconomic costs of Zarb-e-Azb, a war that has already cost the Pakistani treasury $1.9 billion. As Pakistani soldiers brave increasingly hostile territories, Afghanistan-based militants targeting Pakistani soldiers and civilians force families to mourn the loss of their sons and daughters following attacks such as the tragedies at Bacha Khan University this January. Yet in the aftermath of such tragedies, lawmakers on Capitol Hill continue to urge Pakistan to take more decisive action against terrorism. With the Pakistani public increasingly questioning the premise of this difficult relationship, both sides will have to work hard to heal the old wounds that underlie this distrust.

These are delicate waters, and Pakistan’s best bet is a foreign policy President who understands Pakistan, and the costs of its daily fight against terrorism. Ordinarily, this person would be Hillary Clinton, but Clinton’s history with Pakistan is complicated. If her record is any indication, the former New York Senator will be tougher on Pakistan than the Obama administration, posing difficult questions and pushing Islamabad to “do more”, and more often. The former Secretary of State has not refrained from criticising Islamabad’s anti-terror efforts in the past, saying it needs to “once and for all go after extremists, shut down their training camps, their safe havens, and madrassahs that are inculcating suicide bombing behaviour.” A leading candidate, Clinton may yet become President, but her lead over Sanders is thin and she must first win the nomination against Sanders (a man who despite his socialist policies has proven to be less divisive than Clinton and fares better in polls against the leading Republican candidates). If this happens, the tone of Pakistan-US relations may well see a lurch to the right.

As things stand, Pakistan might just fare better under Sanders or Rubio, neither of whom are ideal choices either. Sanders doesn’t know Pakistan as well as Clinton does, having virtually no experience with Pak-US foreign policy outside of supporting Obama’s drone program. On paper, his relative inexperience could be a good thing, enabling him to evolve a favourable non-partisan policy towards South Asia. On the other hand, his costly domestic socio-economic policy, coupled with his non-interventionist foreign outlook, may spell curtailed financial and military assistance. This could also result in a shift away from socioeconomic assistance in the way of Fulbright scholarships and capacity-building programmes in Pakistan.

Republicans have a reputation for being more interventionist. Barring the unpredictable Trump factor[1], it is safe to say a Republican-elect will maintain US interest in Pakistan. But will it be positive interest? Cruz is big on military action – a leaning that could very well prove cataclysmic for the South and Central Asia region looking to recover from, and not engage in, conflict. That said, the Texas Senator has said, “In terms of areas where [Obama’s] foreign policy has caused enormous damage, Pakistan is relatively low on the list.” Marco Rubio has foreign policy experience on his side. As Senator he has visited 16 countries as a senator, including Pakistan and Afghanistan where he met with then-Chief of Army Staff General Kayani and President Hamid Karzai, respectively. As the only Republican candidate with some hands-on experience when it comes to the Pak-Afghan question, Marco Rubio would be a more favourable elect with a nuanced and possibly sympathetic Pakistan policy.

On the subject of Iran-Pakistan trade and energy cooperation, though, both Republicans spell trouble. Cruz actively distrusts Iran and opposed the lifting of sanctions when it was put into effect. Rubio has point-blank said he would move to reimpose them.

With the Republican Party so divided (and the leading candidate so far from the establishment and electability), however, polls suggest that November will see another Democrat elected to the White House. Given that a reasonable president is elected to the White House, Pakistan’s commitment to continuing diplomatic talks with India is likely to help maintain continuity in Pak-US relations as well. These diplomatic talks help maintain stability in the region, as both the current leadership in Islamabad and New Delhi seems to understand. Pakistan’s fight against terrorism, of course, is of critical importance, and this is unlikely to change anytime soon. Pak-US relations are sure to hinge on the success of Pakistan’s National Action Plan,  and faulty implementation by the PML-N government will certainly be raised as an agenda-item in future Strategic Dialogue consultations.

The good news for Pakistan is that, given the enduring and increasingly stronger Pak-China relationship, Pakistan can diversify its options and regional engagements in accordance with its commitment to pursuing regional peace and stability. The US for its part also requires a strategic rethink when it comes to its Pakistan policy. The traditional “Af-Pak” lens is unhelpful – that much is clear. To repair a broken trust with the Pakistani people, Washington could benefit from refocusing its socioeconomic investment in Pakistan, expanding its laudable social reform and human rights projects, scaling up educational exchanges and scholarship programs to build human capital, and investing in projects such as the Diamer Bhasha Dam[2]. Only then will the relationship begin to look equitable, and one in which the US and Pakistan behave like allies, not frenemies.

[1] As someone who isn’t exactly a Republican establishment favourite and is also undoubtedly the most polarising candidate, Trump is not likely to be elected president even if he does manage to win the Republican ticket. It should go without saying now that a (very unlikely) Trump election would not be good for Pakistan.

[2] Construction on the Diamer Bhasha dam should start soon now that 80% of the land has been acquired. The US has pledged its support to the project in the past.