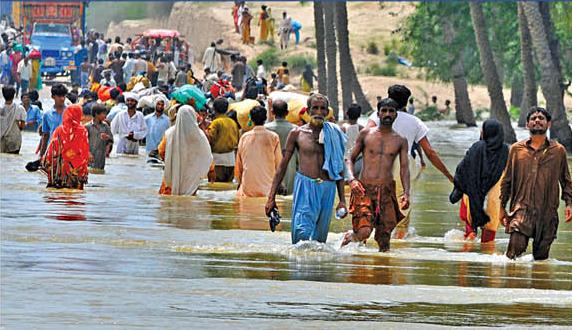 In September 2010, the Jinnah Institute carried out a series of focus groups with flood victims living in Karachi’s relief camps. The focus of the study was to assess the extent to which IDPs felt that their needs were being met by camp administrators. These focus groups formed the basis of a Research Report on Governance and Security which adresses the impact of the flood on political support for various parties, social and economic shifts in flood-affected areas and the threat of increased conflict in Pakistan’s financial hub, Karachi.

•    Providing incentives for IDPs to return to rural areas is important not only to decrease urban pressures, but a basic right of those affected by the floods. Many IDPs have already started to return, and are in need of some form of income between now and the next crop cycle in March (according to some estimates, while areas in KP are likely to be ready for the winter crop, many areas in Sindh will miss this cycle altogether). Employment guarantee schemes, cash for work programs and other livelihood support programs (see the Jinnah Institute report, 2010) should be implemented, keeping local needs in mind.

•    Given that many of the poorest IDPs are still in camps, there is opportunity for monitoring the well-being of families that have seldom been exposed to medical facilities and income support programs. Policy making in Pakistan has frequently been hampered by a lack of local knowledge. Careful enumeration and follow-up of the progress of households, providing mothers and infants with medical care and knowledge on hygiene is possible at a much lower cost than before, and these opportunities should be availed.

•    Many non-profits are providing vocational training and employment assistance to enable Karachi’s IDPs in finding livelihood opportunities in coming months. Initiatives such as these could prevent IDPs from having to depend on criminal syndicates for employment.

•    Providing employment guarantees while attempting to cut back on spending is a challenge that the government will face in coming months. Incorporating employment guarantees in the reconstruction process is one way around this. Particularly on smaller infrastructure projects such as village-to-market roads and inter-village roads, it would be worthwhile to explore mechanisms for the employment of local labor instead of focusing entirely on capital-intensive projects.

•    The Watan card scheme must be used fairly, with transparent mechanisms for addressing grievances. At a time when the government is under high levels of public scrutiny, attempts to politicize reconstruction and rehabilitation schemes will tilt the precarious balance of trust from the local and international community against the government of Pakistan.

•    Independent monitoring and evaluation mechanisms should be built into the cash transfer scheme. Using data provided by NADRA and NDMA, Watan card beneficiaries can be mapped and matched with affected families, including those IDPs who have returned home. It is important to design and implement these projects at the earliest to identify leakages (affectees who did not get the card, card-holders who could not access the money) and irregularities and overlaps.