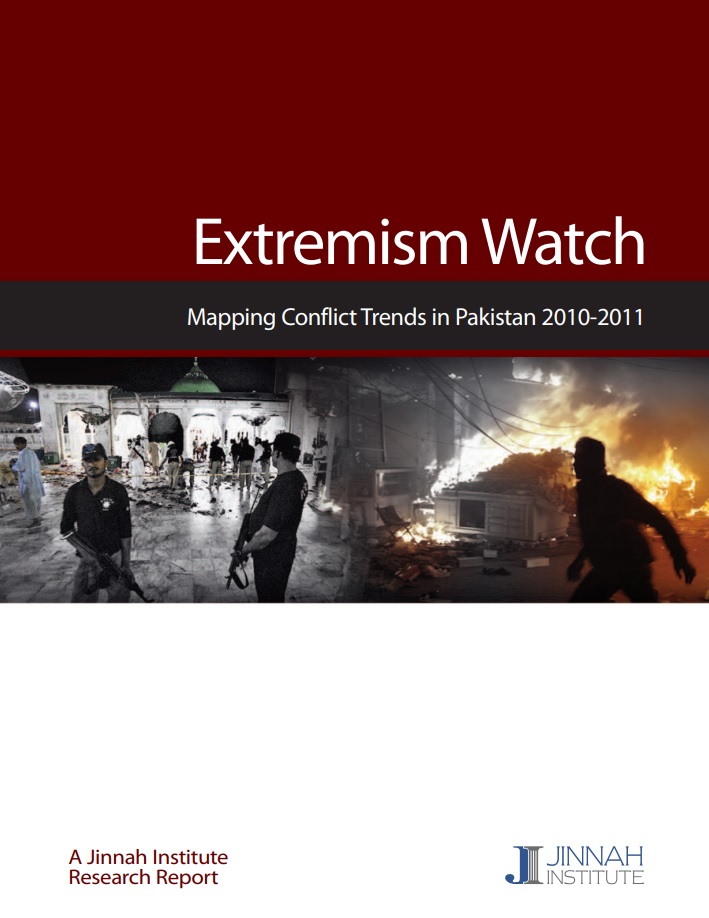 Pakistan’s problem of extremism is a greater threat to the country than terrorism. This was the consensus during the February 16th launch of Jinnah Institute’s report “˜Extremism Watch: Mapping Conflict trends in Pakistan 2010-2011′. The report records and examines various types of extremist incidents that have occurred in Pakistan over the past year, and the effects that these incidents have registered on Pakistani society.

Ejaz Haider, Executive Director of Jinnah Institute, opened the event by welcoming the panelists and guests at the report launch. Mr. Haider spoke about the purpose and design of the report, and acknowledged the need to integrate various issues categorized as extremist activities so that effective policy recommendations could be developed for Pakistan. Mr. Haider stated that extremism is a greater menace in terms of a state’s ability to deal with it, rather than terrorism, and this fact enhances the importance of studying extremism in Pakistan.

Salman Zaidi, Deputy Director Jinnah Institute, delivered a presentation on the major findings of the report and spoke about the early stages of the project. Mr. Zaidi relayed the methodology that was used to define extremism as it is registered in Pakistan today, and identified the prominent trends revealed by the report. He said that despite certain policy recommendations, the report was not intended to be prescriptive as it presented the data and analyzed it according to various metrics. He also spoke briefly about some of the findings of the report. According to the findings, 181 incidents of extremism were reported in various parts of Pakistan, causing a total loss of 534 lives and leaving an additional 1391 persons injured. Mr. Zaidi acknowledge that the data was alarming rather than interesting, and is a wake-up call for policymakers and legislators who are dealing with human security issues facing Pakistan’s citizenry.

After the presentation, Fahd Husain moderated a panel discussion on the report and on the various aspects of extremist incidents in Pakistan. Mr. Husain noted that the report launch came at a time when the perception of extremism was undergoing changes. He said that extremism cannot be eliminated by the force of a gun; instead, it requires a certain measure of persuasion which Pakistani society does not appear ready for. Dr. Moeed Pirzada, host of PTV News’ Sochta Pakistan, stated that the incidence of extremism shows how the social fabric of Pakistan is disturbed. Dr. Pirzada outlined seven major factors that have catalyzed extremism in Pakistan, and felt that though the worst may be over, policy prescriptions to deal with extremism are still necessary. Dr. Pirzada also stated that reconciliation with India would help in healing Pakistani society.

Human rights activist Tahira Abdullah, on the other hand, stated that the data and analysis showed how Pakistan is going in the wrong direction, and that the situation seemed to be getting much worse. She lamented that the lives of journalists in Pakistan are at stake, and wondered how credible media reports could be in terms of evaluating the incidence of extremism in Pakistan. Ms. Abdullah said that the Constitution of Pakistan could not be fully restored until the 8th Amendment was repealed. Marvi Sirmed, columnist for the Daily Times, insisted that the report had immense academic value because it brought forth the crucial distinctions between extremism and terrorism. She said that violent extremism is not only borne out of religious differences, and that extremism in Pakistan has a gendered dimension as well.

Following remarks from the panelists, members of the audience expressed their views on different aspects of the report in the questions and answers session. The response on extremism in Pakistan was mixed; audience members acknowledged strides made by civil society against extremism elements, while others criticized the response of state and society to extremist incidents. Audience members asked whether actions taken by the state against extremism could be reoriented or energized, and how the state’s success against extremism could be measured. When asked whether the Pakistani state has failed or not, the panelists argued that the Pakistani state has not failed, but is under tremendous stress, especially in areas where violence and terror has become entrenched in the last decade. Audience members also asked about the linkages between extremism and tradition, and how such overlaps could be dissected and corrected, especially in a society like Pakistan. The responsibilities of the Pakistani state, and the percolation of extremism to the grassroots of Pakistani society, were repetitively discussed by the audience and panelists in a highly interactive question and answer session.

The Jinnah Institute is an Islamabad-based public policy think-tank, advocacy group and public outreach organization that has published several reports on various issues that affect Pakistan today. Last year, the Institute published a report titled “˜Pakistan, the United States and the End Game in Afghanistan: Perceptions of Pakistan’s Foreign Policy Elite’ as part of its Strategic Security Initiative, which informs academic and policy discourse regarding regional security developments and Pakistan’s role in the world.