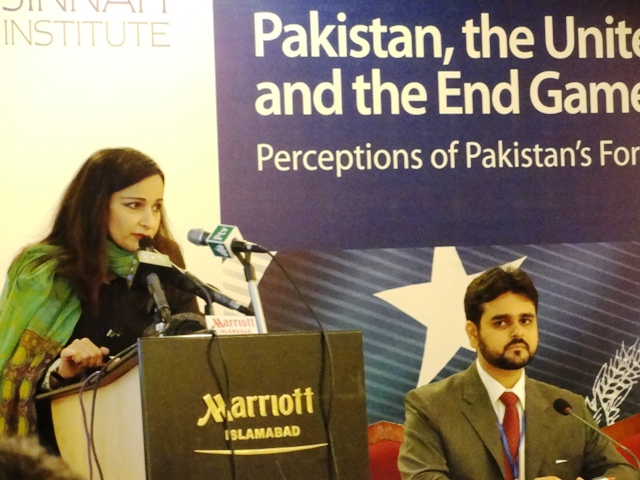 Islamabad, 25th August: Pakistani foreign policy elite expressed their views in a report published by Jinnah Institute on the endgame in Afghanistan and Pakistan’s stakes in light of the same. The report, titled  “˜Pakistan, the United States and the End Game in Afghanistan: Perceptions of Pakistan’s Foreign Policy Elite’ was launched in Islamabad on Thursday in an event that was attended by leading policy experts, legislators, academics, media persons and civil society members. The report was written jointly between Jinnah Institute and United States Institute of Peace.

Sherry Rehman, President of Jinnah Institute spoke about the need for such a collaborative effort, given Pakistan’s pivotal role in the Endgame in Afghanistan. She said that the idea behind the report was to bring Pakistan’s intellectual capital on foreign policy to the table to bring clarity and motive to America’s evolving priorities and Pakistan’s goals. She highlighted the main themes of the report and committed her institutional resources to the search for common ground between those seeking an amicable end to the conflict in Afghanistan. Rehman said Pakistan has vital stakes in Afghanistan’s stability and sovereignty, so would best support an Afghan-led inclusive reconciliation process, privileging a political surge over a military solution. She said it is in the best interests of Pakistan today to build on convergences with all neighbours and allies, including Afghanistan and the US. Pakistan is fighting a frontline battle against terrorism at its western border, and has paid too high a human, military and economic price to seek solutions based on anything but regional peace.

Salman Zaidi, Security Analyst at the JI and co-author of the report with Moeed Yusuf (USIP) and Huma Yusuf (Associate Research Fellow JI ), spoke about how the report was put together, with a big-tent inclusion of key voices from Pakistan’s policy community, including all political parties. The report was path-breaking in capturing a spectrum of policy perspectives on the endgame in Afghanistan, documented in several roundtable sessions and one-on-one interviews with experts.

Moeed Yusuf, South Asia Advisor for USIP, gave a detailed presentation on the report findings which reviewed the implications of America’s end game strategy in Afghanistan and the region, in addition to how Pakistan can best pursue its national interests given the dynamics of the endgame. According to the report, there is an intrinsic link between the stability of Pakistan and Afghanistan and only an inclusive and relatively efficient government at Kabul will ensure stable governance on both sides of the border, particularly in the FATA region. Moeed Yusuf also spoke about the perceived American civil-military disconnect and failure to define the principal target of the military surge in Afghanistan.

In his closing remarks, former Ambassador Aziz Ahmed Khan, reiterated the importance of moving faster on reconciliation in Afghanistan.  He stated that despite being a key ally to the United States on the war on terror, the relationship between the two remains marred with deep-seated mistrust and mutual suspicions about each other’s intentions.

A lively question and answer session followed, in which members of the audience spoke about different aspects of the report and its policy recommendations. The event was attended by senior diplomats, ambassadors, Pakistan’s foreign policy community and civil society. Former Foreign Secretary Humayun Khan said that the longer the US military operation continues without a clear path for political negotiations, the tougher it will get for Pakistan to manage its internal security balancing act.