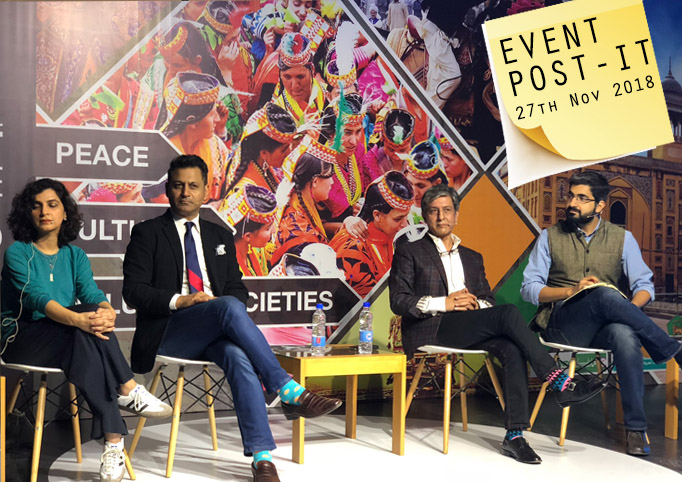 Political systems across the world have undergone a wave of populism, and are hard pressed to balance majoritarian political demands against fundamental human rights. Nowhere is this contest more visible than on social media where the worst tendencies of online political participation are demonstrated in policy debates on human rights, development and peace. This discussion was taken up at Jinnah Institute’s University Townhall titled ‘Social Media and Populist Nationalism’ held on 27th November, 2018 at the 2nd International Youth Summit organized by the University of Lahore. The event brought together prominent thought leaders Aysha Raja, Fahd Husain, Ejaz Haider and Umair Javed as speakers, and was moderated by Jinnah Institute’s Salman Zaidi.

Opening the discussion, Aysha Raja made a distinction between right-wing and left-wing populism and observed that both brought their own strands of determinism that should be resisted. She emphasized that power structures must be made more inclusive through mainstreaming marginalized communities so that popular narratives can evolve and alter the nature of political participation from within. When it comes to the use of technology in politics, she remarked that books utilize a basic, time-honored technology that hold power over digital platforms and that reading is critical for informed political participation and for young people to navigate post-truth realities where misinformation is common.

Fahd Hussain observed that the prevalence of social media is to the millennial generation what electricity was to the previous generation; its function and usage need not be explained to those who grew up with it.  However, its effect on political participation must be highlighted. Hussain underlined the tendency of social media to reduce grave socio-political phenomena to like and dislike buttons, especially on Twitter and Facebook feeds, that makes young people’s interaction and understanding of their environment simplistic. The spread of fake news is possible because of the unquestioning manner in which social media users consume information online. Hussain stated that online activism need not translate into offline action as many supporters of social media campaigns want to be perceived as supporters, rather than take up those causes in reality.

Ejaz Haider pointed out that populism has gained strength because of the facilitation provided by social media, whose technologies have changed how political messages are conveyed and sloganeering is carried out. These changes should not be conceived as positive, as social media immerses people in echo chambers where they are exposed to opinions similar to their own. Haider informed that social media is certainly not an egalitarian space for participation as we may think. In fact, on the contrary, it is highly regulated by ‘gatekeepers’ who manage big data. If the online space offers a platform for individual civic participation and quest for state accountability, the state easily wins against the individual through virtue of ‘gatekeeping’ the flows of information and detaining him or her if needed.

Umair Javed defined populism as a way of doing politics rather than politics itself, without the need to espouse a particular ideology or policy prescriptions. He pointed out that populism interacts awkwardly with social media: whereas social media provides a platform to voice opinions, populism pushes for the opposite and imposes restrictions on free speech. Javed felt that curbs on free speech and withholding content that reflects poorly on the state – such as human rights violations – should instead be met by efforts to improve conditions on ground.

After a lively question and answer session, the event concluded with a vote of thanks to the panelists and University of Lahore for providing a platform where students and policy experts could engage on an important theme. This event is part of JI’s countrywide discussions at university campuses seeking to engage youth in policy debate and practice.