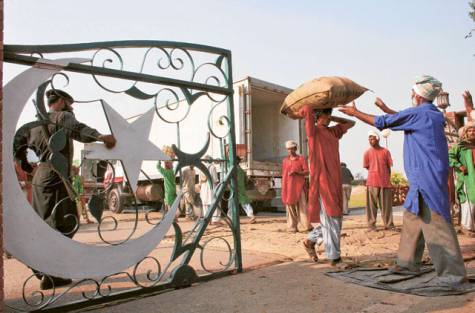 According to the State Bank of Pakistan (SBP), in FY2010, the value of Pakistan’s exports to India was $260 million, and the value of imports from India was $1061 million. Provisional figures for FY2011 suggest that exports to India increased to $287 million and imports from the country increased to $1445 million. The estimates of the Federal Bureau of Statistics (FBS), also reported by the SBP, were slightly different, showing exports worth $264 million in FY2011, and imports worth $1743 million. Thus, on an average, the total value of trade between the two countries appears to be close to $2 billion according to official estimates. The value of Pakistan’s exports to India is just over 1% of total export value for Pakistan, while the value of India’s exports to Pakistan constitutes barely 0.6% of its total exports

Official estimates do not, however, tell the full story. In addition to smuggling, or outright illegal movement of goods, trade between India and Pakistan sometimes takes quasi-legal forms. Thus goods are re-routed through third countries (mainly Dubai and Singapore) before appearing in the markets of either of the two countries. For obvious reasons, it is impossible to quantify the value of such trade with certainty, but estimates range from $0.5 to $10 billion. A recent study confirmed the lower end of the range, and estimated informal trade in 2005 at about $540 million.