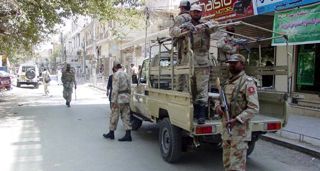 Making Sense of Violence in Balochistan 2010

Balochistan has experienced a clear upsurge in violence over the last year, with changing trends in terms of attacks as well as targets. Making sense of this conflict requires parsing the growing categories of violence inflicted by a multiplicity of actors with competing motivations. The fallout of the violence has been immense over the entire province, putting great strain on state capacity to control or prevent violence, but the greatest challenges have been endured by the civilian population itself, with attacks directed increasingly towered civilian targets. This paper reviews the causes of violence, the actors involved, the trends documented over the past year and directions in conflict resolution.

Violence in Balochistan has surged in 2010 on multiple levels. Newspapers report an upward trend in the targeting of non-political civilian targets that include women, in addition to a spate of politically motivated target killings and attacks, including most recently the attacks on Governor Zulfiqar Ali Magsi and Chief Minister Nawab Aslam Raisani in December. The current phase of violence has continued from 2006 after the killing of Nawab Akbar Bugti in a military operation, which motivated key nationalist groups like the Balochistan Liberation Army (BLA) and the Balochistan Liberation United Front (BLUF) to launch an all out offensive against the state[1].

The BLA and BLUF are not the only active insurgent groups, as many as five organizations were banned in September 2010 by the government, which included the Lashkar-e-Balochistan, Baloch Republican Army and the Baloch Musallah Difai Organization.[2] These organizations vary by modus operandi, some concentrating their efforts on attacking state infrastructure, others taking on non-Baloch civilian targets. Insurgent violence from January to September 2010 alone claimed 318 lives and injured 615 in 458 incidents according to one research study[3].

In addition to the separatist insurgency, Balochistan also experiences high levels of sectarian violence directed mostly at the Shiite Hazara community. The extremist Sunni militant outfit Lashkar-e-Jhangvi has claimed responsibility for many of these attacks over the last several years.[4] Jundullah and the Tehrik-e-Taliban Balochistan are also active in the province and connect Balochistan in a regional terror dynamic with Afghanistan and Iran. From January to August 2010, 26 sectarian attacks had claimed 39 lives and injured 17 people.[5] In the bloodiest sectarian attack in 2010 65 people were killed on September3rd in a religious procession.

Furthermore, there has an alarming increase in attacks on educational institutions and teachers. Human Rights Watch reports a figure of 22 school teachers and school personnel killed between January 2008 and October 2010[6]. Islamist groups have sometimes claimed responsibility for these attacks. Since 2008, 200 teachers have transferred out of Balochistan for fear of being killed and another 200 are currently in the process of transferring out of the province. In 2009, government schools remained open for only 120 days compared to the regular 220 in the rest of the country.[7]

The 7th December 2010 attack on Balochistan’s Chief Minister Nawab Aslam Raisani presents an intersection of insurgent and sectarian agendas. Groups who have claimed responsibility for the attack may well consider the Chief Minister a high value target, albeit for very different reasons. The Lashkar-e-Jhangvi (LeJ) claimed that it had attacked the CM for giving protection to Shiite mourners during Muharram, whereas the Balochistan Liberation United Front (BLUF) stated that it had carried out the attack as a warning to the Chief Minister for speaking against Baloch armed groups. Furthermore, it strongly denied any other group’s involvement other than its own. Less than a week earlier, on 1st December 2010, the Governor of Balochistan Nawab Zulfiqar Ali Magsi had escaped an assassination attempt for which the Balochistan Liberation Army (BLA) claimed responsibility.

Earlier in November, the Chief Minister had offered to broker negotiations between Islamabad and the “angry Baloch” people.[8] The Governor had opined at a press conference in March 2010 that complete autonomy was the real solution for Balochistan, not the Aghaz-e-Huqooq-e-Balochistan package designed by the federal government.[9] However, the attacks on both Governor and Chief Minister came as reminders of the opposition that insurgents and Islamist groups have towards the state and its representatives.

State opposition in Balochistan has a history going back several decades and the current phase is the fourth major insurgency in the province since independence. This insurgency derives from the military operation in 2006 under the Musharraf government, which galvanized the Bugti, Mengal and Marri tribes. The operation blockaded Dera Bugti and Kohlu districts and caused a humanitarian crisis in the way of 200,000 people displaced of which 8000 – 10,000 died as a result of malnourishment and lack of shelter.[10] This comes against a backdrop of severe underdevelopment in the province. 58% of the population lives below the poverty line and 92% districts are classified as ‘high deprivation’ areas. The literacy rate is 29.81% compared to the national average 39.69% and the likelihood of unemployment for young people is twice as high compared to the rest of the country.[11] These figures are stark against Balochistan’s fuel and mineral wealth which has not contributed to prosperity in the province. The large gas deposits at Sui which provide 50% of Pakistan’s aggregate gas supply are a case in point, putting a question mark on where profits will go from Reko Diq’s mineral discovery worth $260 billion.

Baloch nationalist leaders have repeatedly demanded control over the province’s resources, in addition to a greater proportion of development funds channeled from the centre to Balochistan. The PPP government introduced the Aghaz-e-Huqooq-e-Balochistan package in November 2010 to address these concerns, by way of introducing constitutional, political and administrative reforms and economic stimulus. The federal government gave out Rs. 12 billion to the Balochistan government in 2010 in arrears owed for gas revenues and announced a significantly increased annual budget of Rs. 152 billion. The package also included an inquiry into the killing of Nawab Bugti.[12]

However, there has been a simultaneous increase in the numbers of missing persons and assassinations of Baloch nationalist leaders. The Human Rights Watch reported a figure of 1.100 Baloch missing during Musharraf’s rule, whereas Baloch groups give a much higher figure of 9000. The Human Rights Commission of Pakistan reports 600 missing, of which 240 are confirmed in detention and another 40 who have been killed. The Balochistan Chief Minister has confirmed a list of 800 persons. 2010 saw the killing of prominent Baloch leader Habib Jalib, followed five days later by the killing of another political leader Liaquat Mengal. In 2009, the bodies of three prominent leaders Ghulam Mohammad Baloch, Lala Mir and Mohammad Baloch were found in Turbat and had the province gripped in violence for several days.

The Balochistan conflict has been categorized as low-intensity guerilla warfare.[13] Several factors could determine its outcomes, including the military’s response, political relations between the provincial and federal government and the impact of regional actors.

There can be a potential move towards peace through conflict resolution in Balochistan if a democratic culture is strengthened in the province without interruption. This requires an active dialogue with all stakeholders in addition to implementing the AHB, the 18th Constitutional Amendment and the 7th National Finance Commission Award. This may draw in Baloch nationalists and isolate hardline insurgent groups[14]. However, a more likely scenario is a status quo where the standoff between insurgents and the security establishment continues and both maintain their narratives. Democratic forces lose ground in the province and the overall Baloch political discourse neither reflects political integration nor separatism.[15] Finally, a third scenario can be created if the status quo is broken in favour of the insurgents. Mergers between nationalists and insurgents can bring them mass support. The state can either fail to bring this under control or use massive force which results in the wholesale killing of Baloch people.[16]

Several human rights and security related reports reviewed for this paper make recommendations to the government and other stakeholders for the conflict to end in Balochistan. In this regard the Aghaz-e-Huqooq-e-Balochistan (AHB) package is a significant step in the right direction and has created an important historical precedent. It may serve to forestall the inroads sectarian and Islamist groups have made in the absence of effective governance, however, the insurgency may very require different solutions.

Human rights concerns need to be addressed foremost. The federal government must demonstrate willingness to investigate the military, the Frontier Corps and intelligence agencies who stand accused of decapitating the nationalist leadership over the period June – October 2010, when 40 leaders and activists are known to have been tortured or killed.[17]. All political prisoners including those in the unlawful custody of the intelligence agencies must be released in accordance to the Supreme Court’s directive to end the abductions of political opponents.[18] Insurgent groups must scale down atrocities, in particular cease attacks against educational institutions and personnel. The Balochistan government must ensure that law enforcement agencies respect human rights concerns and transparency is created in the detention of suspects.

The military must be withdrawn from the province as has been done effectively in two districts. Levies may be brought to more effective use in maintaining law and order. Furthermore, traditional Baloch leadership may be engaged in creating avenues of dialogue with stakeholders in the insurgency inside and outside national borders. The Balochistan government must develop a roadmap for conflict resolution and controlling violence in the province. Finally, the AHB package must be implemented in letter and spirit so that visible change occurs on the ground.

On 14th December 2010, Chief Minister Raisani indicated that talks with insurgent groups were being considered. For the talks to be meaningful, the state has to pay heed to recommendations made by independent observers. At the moment it is equally important to address Baloch grievances through political and economic initiatives, as it is to negotiate with insurgents. On the one hand is a separatist minority that may be co-opted through a carrot-and-stick formula, but on the other is a large majority of the Baloch population that may be compelled to take up arms in years to come.

[6] Human Rights Watch (2010) “Their Future is at Stake”, Attacks on Teachers and Schools in Pakistan’s Balochistan Province, pg. 1

[17] Human Rights Watch (2010) “Their Future is at Stake”, Attacks on Teachers and Schools in Pakistan’s Balochistan Province, pg.10