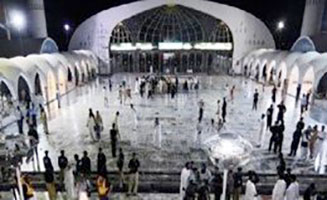 That Colorless Life: Attacking Shrines and the ‘other’ Islam

The earliest reported incident of an attack on a shrine is traced back to December 18, 2007, when militants blew up the shrine of Abdul Shakoor Malang Baba on GT Road. In reality, the attack on shrines possibly pre-dates the Lal Masjid operation, with shrines being forced to shut down as militants tightened their grip on the tribal areas along the Pakistan-Afghanistan border.

The landmark operation that took place in Islamabad in July 2007 pitted Pakistani society in an open battle against militancy, and places of worship have become low-cost, high-profile targets in terrorist attacks. The Long War Journal documents 27 major attacks on places of worship since 2007. Of the dozen or so bombings that have taken place on shrines, the deadliest by far have been in the July to October 2010 period, starting with the bombing of the Data Ganj Baksh Shrine where 41 people were killed and over 170 injured.

There is reason to believe that the most recent spate of attacks on Sufi shrines is symptomatic of a shift in terrorist calculus, unlike anything experienced in Pakistan’s long war against extremism.

The earliest shrine bombings usually took place in the tribal areas and in Peshawar, the heartland of the war on terror. The attack on the 400-year-old shrine of Hazrat Abu Saeed Baba in the outskirts of Peshawar in March 2008 killed 10 villagers. Commentators at the time criticized the media for taking little notice of such events. The bombing of Rehman Baba’s Shrine near Peshawar in March 2009 saw no casualties, but left an indelible mark on the sanctity of the 17th-century Sufi poet’s shrine which was revered as a symbol of Pashtun unity, secularism and tolerance2.

The attack took place in the early hours of the morning, perhaps indicating that amassing a large number of casualties was not the primary goal of the attackers.

Since the Rehman Baba shrine attack, Sufi shrines in Hangu, Nowshera and Buner have been bombed, burnt or closed down. Simultaneously, attacks on Shia and Barelvi mosques claimed casualties in the hundreds. Sufi shrines, like mosques, shopping centers, hotels and hospitals, are part of what security experts call “acquired targets” – locations identified for attacks by militant groups. As the government anticipates increased retaliation for the operations in FATA, state facilities have become more and more difficult to attack. “Getting to the entrance (of a government building) is like going through an assault course,” says security expert Ejaz Haider. High-level targets frequented by foreigners and diplomats are similarly guarded by layers of security, as anyone who has recently tried to get into the Serena Hotel in Islamabad can attest to. Which is not to say these fortresses are fool-proof, only that they make for costly operations. A case in point: the November 11th attack on the CID building in Karachi required several individuals and up to a thousand kilograms of explosives; as opposed to the two-person attack on Abduallah Shah Ghazi’s shrine in the city just a month before.

In recent months, militant efforts have turned increasingly to operations in the heart of Pakistan’s cities, as their strongholds come under fire in FATA. Indeed, 2010 has seen an unprecedented increase in drone attacks – more than all the previous years combined. The Brookings Institute reports 15 drone attacks in September alone, making it the most intensive use of drones in the history of this region. According to columnist Raza Rumi, the military operation has frustrated the militants, forcing them to turn their attention to civilian targets. There could be several reasons for this: attacking the most vulnerable part of the state is a reminder that militants are still at large, and killing civilians may result in pressure on the government to negotiate with extremist groups. The consensus, on all fronts, is that urban terrorism will increase before it abates. The loose ideological alliance of militant groups (call them Al Qaeda, the Taliban, whatever you like) faces tremendous pressure in the tribal areas, and is turning to local sectarian outfits in Punjab and Sindh to tap into urban networks and knowledge of local targets.

The question remains, what makes the hundreds of shrines across Pakistan’s rural and urban landscape a prime target for militant groups?

At the outset, shrines are ideological “variations” of Islam that are antithetical to the strict Wahabi ideology of militant groups. With some exceptions, extremist versions of Islam take their ideological cues from a linear version of the faith, imported from Saudi Arabia – this is also a version that has struggled to find traction in South Asia’s pluralistic patchwork of religion and culture. The Sufi movement in particular attracted lower caste individuals and the very poor. Columnist Raza Rumi notes that until the eighties, Barelvi Sunnis and Shia followers of higher social and economic groups frequented these shrines as well. Today, the majority of visitors continue to be lower income groups and women, while patronage by the upper middle class is in decline3. Rehman Baba’s shrine, for example, was one of the last remaining public spaces frequented by poor women in Khyber Pakhtunkhwa’s increasingly conservative landscape. It is possible that the more exclusive dars and tableeg practices have increasingly replaced patronage of shrines.

This does not mean that traffic at these shrines is slacking off. On Thursdays, the shrine of Data Ganj Baksh, Abdullah Shah Ghazi, Bhit Shah and countless others attract thousands of visitors. Unlike the traditional mosque which is almost exclusively frequented by men, the shrines are open to women, children, Muslims of every hue, and minority groups.

For some observers, the militant’s tactics are cornering mainstream, non-extremist followers of Islam and demanding them to choose their allegiance to a particular faith. Such a choice is, of course, exactly the opposite of what Sufi shrines symbolize in Pakistani culture.

Attacking these places of worship is a clear reminder that the Taliban do not tolerate Muslims of any “variety” other than the one they prescribe. A case in point is the deadly attack on the Ahmadi mosque earlier this year, in which over 70 people were killed. In that instance, the attack was not simply symbolic: the militants were out to eliminate followers of a “lesser” Islam, and scare the rest of them into hiding. Even Sunni Muslims are not immune to this violent “cleansing” of dissenters – when the State turned to Barelvi leaders as official spokespersons against extremism, these individuals were the first to be targeted by militants.

At the heart of the struggle for support (or fear) from the public is the omnipresent role of the media. Perhaps realizing the strategic mileage gained because of repeated media coverage after the Data Darbar attack, militants followed suit in Karachi and Pakpattan. Media observers note that so far, the template of reporting is based on a news cycle of speculation, fear, and repetition. The media is not, for example, used to rally support against militants – a model that has been successfully exploited by the India news corps after the Mumbai attacks in November 2008. From the government’s point of view, countering militant insurgency in Pakistan is impossible without building consensus in the opposite direction: as attacks on public places increase, pressure to eradicate militant hideouts must mount.

Attacks on shrines and places of worship are potent because they give rise to a plethora of emotions: primarily, shock and fear, but also anger and a sense of injustice. Militants rely on the former to bully the state and people into submission. What is conspicuously absent is the willingness to use the latter – anger and injustice – to rally support against militancy. According to the best of experts, this is not simply a war that can be won by mounting higher barriers and tougher security. Building consensus against terrorism will remain the government’s toughest challenge, whether or not it chooses to face it.