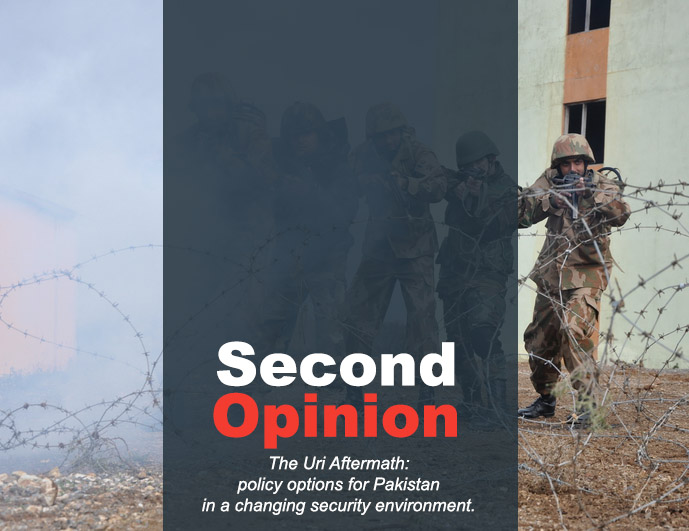 As Pakistan navigates new bends in a changing regional environment, tensions with India have both raised threat perceptions and stalled efforts to normalise relations. It is in the context of recent events, including unrestrained Indian belligerence in the aftermath of the attack on Uri, that Jinnah Institute turned to a select panel of policy experts to solicit their thoughts on the current crisis in India-Pakistan relations, and to discuss policy options for Islamabad.

Salman Bashir, former Foreign Secretary and High Commissioner to India, expressed the view that South Asia is presently in the throes of a brutal power play. In India, the ruling BJP government has begun to enact an RSS agenda aimed at undoing Partition. Even before the Kashmiri Intifada triggered recent events, the China Pakistan Economic Corridor (CPEC) had unnerved India, even as policymakers in New Delhi construed the United States’ pro-India inclinations as carte blanche to exercise its regional domination. Uri was merely a pretext for a revanchist regime in New Delhi to unleash a propaganda war against Pakistan, and the ensuing hype and hysteria had choked any voice for reason among rational Indians. Threats of water wars, surgical strikes and isolation were tantamount to madness that could trigger nuclear annihilation.

Pakistan, for its part, was no longer into global power games, even as Afghanistan continued to sink into an ever-darker abyss. With the United States preoccupied with a Presidential election and the unfolding Syrian crisis, Russia is now reasserting its role in global affairs and has legitimate interests in ensuring the security of regions adjoining its southern borders. On the subject of policy options for Pakistan, Mr. Bashir argued that Islamabad must stay the course, enhance internal cohesion and aggregate national strength.  Appeasing India was not an option, and no dialogue was possible with a regime bent on undoing Pakistan. Furthermore, this was a time for clarity of thought and action, and the entire nation should resolutely stand behind the Pakistan Armed Forces. Pakistan has the capacity to defeat Indian efforts aimed at internal subversion. On the foreign policy front, it was essential for Pakistan to reconnect and build strategic convergence with Washington, while simultaneously focusing on greater Eurasian regional processes. With China the aim should to deepen coordination and cooperation in all fields.  A major opening with Iran is also long overdue.

Zahid Hussain, senior journalist and Jinnah Institute Senior Fellow, took the view that in the aftermath of the attack on Uri, Prime Minister Narendra Modi had laid bare India’s strategy of what could be described as ‘vertical and horizontal escalation’. As part of this strategy, India seeks to encircle and bleed Pakistan dry by intensifying cross-border covert operations without discarding the option of military strikes. India also aims to isolate Pakistan internationally and economically, in addition to using water as a weapon in the conflict. New Delhi feels that by deepening India’s strategic collaboration with Afghanistan and other regional countries, it can further scale up the pressure on Islamabad – a potentially costly gamble by an Indian leader known for his appetite for risk. Such reckless action could easily spiral out of control and turn into full-blown military confrontation. The underlying calculation is that India can afford this brinkmanship given the country’s growing global influence.

At the same time, New Delhi’s brutal use of force to suppress the popular uprising in Indian-held Kashmir has not escaped the attention of international rights groups. The Indian government has drawn criticism for not allowing a UN observer team to visit the troubled territory. This could explain why the Uri attack was unable to get a significant international traction. The Indian government refuses to accept that there is an internal problem in Kashmir, and not an external one. While it is true that Pakistan’s own flawed policies and inability to take out all shades of terrorist and militant groups operating from its territories has drawn widespread international criticism, Prime Minister Modi’s efforts to turn Pakistan into a pariah state is taking things too far.  Any effort to destabilise Pakistan through covert and overt operations will have serious consequences not only for the region but also for India itself.

Zamir Akram, former Pakistani Permanent Representative to the UN in Geneva and to the Conference on Disarmament, maintained that there were valid grounds to suspect that Uri could have been a ‘false-flag’ operation. India’s subsequent actions signify an altered regional security environment. It’s repression of the Kashmir uprising, and a consistent refusal to engage with Pakistan to find a negotiated solution to this long-standing dispute, portends continuing tensions between the two countries. Uri’s aftermath indicates that India will continue to remain in denial about the ground realities in Indian-occupied Kashmir while trying to externalise the problem by blaming Pakistan. New Delhi will also resort to frequent low-level LoC violations to satisfy domestic opinion, terming these ‘surgical strikes’. But despite Indian sound and fury, New Delhi will be careful not to provoke escalation. In this sense, Pakistan’s full-spectrum deterrence as an antidote to the Indian Cold Start doctrine has worked, and will continue to enforce deterrence in future.

Amb. Akram further held that India has tried to isolate Pakistan by using the terrorism bogey. In addition to grouping with Afghanistan, Bangladesh and Bhutan to derail the 19th SAARC Summit, India also tried to engineer an anti-Pakistan outcome at the BRICS Summit in Goa, only to fail. Not only did the final BRICS Summit declaration fail to criticise Islamabad even indirectly, but the Chinese leadership also expressed a stout defence of Pakistan, rebutting Modi’s fulminations. Meanwhile, Russian troops went ahead with their joint exercises with Pakistan despite entreaties from India not to do so. Almost at the same time, Iran expressed an interest in joining the China-Pakistan Economic Corridor (CPEC). Ultimately, while Uri has led to neither Indian surgical strikes nor Pakistani isolation, the broader global strategic environment is changing rapidly. This poses both challenges and opportunities for Pakistan. Uri has brought these changes into sharper focus. The emerging Indo-US strategic partnership to contain a rising China, Chinese effort to deepen strategic relations with Pakistan, the fast evolving entente between Beijing and Moscow, which could include Islamabad, all present a paradigm shift for the South Asian security environment. American efforts to build India into a military and economic counter-weight to China poses immense security challenges for Pakistan, and this will require Islamabad to maintain credible deterrence across the entire spectrum from conventional to nuclear weapons.

Salma Malik, Assistant Professor of Defence and Strategic Studies at Quaid-e-Azam University, took the view that events in the run up to and aftermath of the attack on Uri underscored the need for a sustainable and well-articulated policy framework for bilateral engagement. While policy must stem from vision, it must also be backed by a national effort to realize that vision. Pakistan’s mature response to Indian jingoism in the aftermath of Uri was, tactically speaking, a welcome move. However, firefighting is no substitute for a sustainable and comprehensive action plan, and Pakistan must do more than rely on a reactive foreign policy toolkit. Given its acute policy deficits, it is unsurprising that the state has lost out on major foreign policy opportunities in recent years, including a strong strategic foothold in Afghanistan. At a broader level Pakistan faces international isolation, even as its security apparatus remains exclusively focused on India. Prof. Malik further added that Pakistan needed to strengthen and leverage its own power potential, and refrain from playing into the hands of the country’s many adversaries who would rather see it labeled a pariah state. Islamabad must also realize that changing times warrant a dynamic policy framework and robust action plans, which can be articulated in clear terms. Only then can this translate Pakistan’s image and role as that of a positive and indispensable actor on the global stage. Pakistan has made tremendous sacrifices in recent years, but there is little appreciation for this at the international level. Unless Islamabad is able to overcome policy burnout, realize national potential and wrest back the initiative to seek a voice and space in global policy corridors, it will continue to be scorched by the smoldering fires around it.

The views in this publication do not necessarily reflect those of the Jinnah Institute, its Board of Directors, Board of Advisors or management. Unless noted otherwise, all material is property of the Institute. Copyright © Jinnah Institute 2016