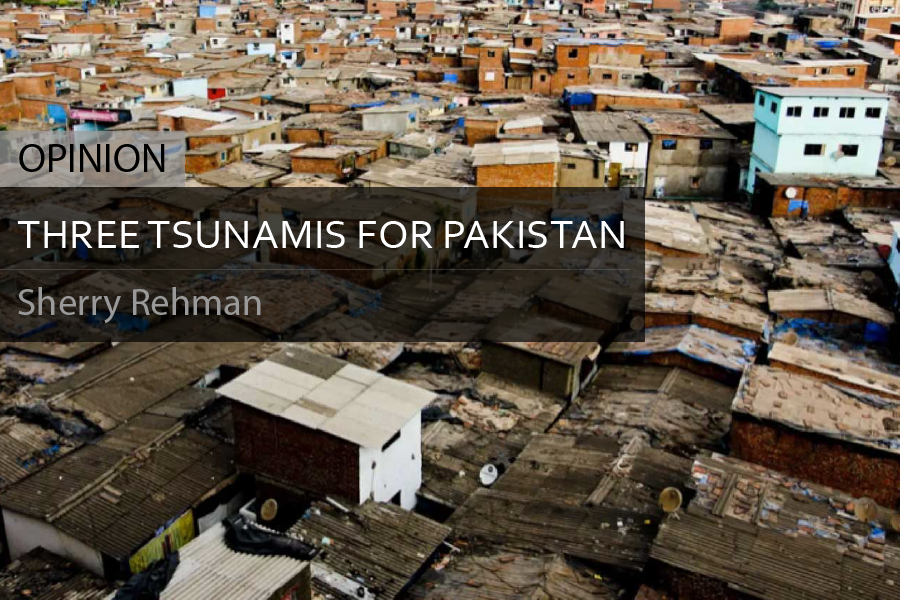 Like many parts of the world, Pakistan is going through a populist moment. A key trait of such campaigns is big-ticket promises of transformational reform in stark contrast to regime-outcomes.

One of these outcomes mapped globally is a reliance on autocratic rule, the demonisation of dissent, rescinded civil liberties and media freedoms. A hallmark of the growing illiberalism such models foster is an embrace of thought-binaries. With a polarising tone set from the top, the public conversation becomes divisive and strident, igniting public anger and fear generated by declining standards of living and access to fundamental entitlements. The result is little or no public attention on social and development crises, let alone goals.

The need to focus on three key trends, actually incoming tsunamis, hitting Pakistan is obscured in such an environment where policymaking is compromised by a relentless, disproportionate buzz on the daily ephemera of politics. More importantly, any cohesive across-the-country implementation of policy becomes an even bigger challenge. The media too finds it hard to stay on point, jettisoning debate on structural issues for hot-button ratings in such a blitz of sponsored, half-fake, commoditized news.

What are the big risks to Pakistan as we enter the next decade and century of borderless contagions and national challenges?

The first is Pakistan’s demographic time-bomb. With a stated population growth rate at 2.4 percent, we are now entering a period where we are the handful of countries in the world to prove Malthus’s pessimism right. Instead of Bangladesh, which has pulled up its governance socks, and bested us in lowering its population rate through a targeted policy, Pakistan is on the verge of multiple development crashes, magnified on the rocks of low economic growth.

When economic growth dips its graph, also projected now at 2.4 percent, to match population, it is time to press an alarm button, and remember that both are conservative estimates. Why population growth matters is because its effect acts as a multiplier on other social and economic deficits, making it the single largest stress-inducer on creaky infrastructure, poor governance and diminishing resources.

If we stand back to look at the numbers, they shock. Right now we have a new person born in Pakistan every twelve minutes. To be sustainable, it should have been at a half of this number. Since 1998, our population has gone up by 57 percent. These rates are completely unsustainable, because this suggests a doubling of our population by 2050. The impacts are huge. Had our population trends resembled Indonesia, or even Bangladesh, for instance, we would have had 40 million people less in poverty.

Given that 60 percent of Pakistan is now food insecure, is a state and community-driven agenda not worth the public time? Lessons from Bangladesh suggest that big-scale campaigns involving religious scholars, school curricula and television pulpits are needed to do the heavy lift. The messaging has to be loud and clear, not ambiguous or conditional. With contraceptive prevalence at 35 percent only, our reproductive health system needs an upgrade, through a revision of strategy both at the national and community levels.

The Lady Health Workers programme needs resources, which were upped last in 2010. Families need to be small to be healthy, educated and working. Right now, over a million young people are entering the job market every year. Only a very robust economy growing at 8 percent can provide jobs and shelter for its people. With our economic goals levelled forever at macroeconomic stabilization, high interest rates and declining manufacturing, no number of magic international investments even under CPEC will create those jobs.

Tied to the population alarm bell is the climate stress danger. In the last two years, Pakistan has moved from the world’s seventh most affected country to the fifth. Irrespective of our global carbon footprint, our vulnerability is high to rising temperatures and extreme weather. This is not some abstract science, but a reality that impacts both citizens and state in escalating quantums. Last year, Pakistan recorded the highest level of heat in the world in Jacobabad. This year, globally, Turbat was the hottest city in the world.

These are not all numbers from some development conference. The results are in our back yards and on bodies. Heat-induced deaths, droughts and crop-reductions are causing lower agricultural yields than a decade ago, while our glacial melt triggers flash-flooding combined with every monsoon. Policy communities and parliaments need to start talking about reducing greenhouse gases.

Air quality in Pakistan’s cities and villages has given Punjab a fifth season. Instead of waiting for India to stop burning crops, we need to protect our people from Delhi-like black-lung syndrome by taking timelined steps to convert big industrial emitters to clean fuel tech and kilns to zigzag converters. Fuel imports and vehicle exhaust systems have to upgrade to Euro 4 or 5 levels if we are not to expect radioactive dystopias. India has stated a policy ambition to go electrical by 2030. Why can’t Pakistan at least do some of the above?

Water at zero is Pakistan’s other big looming crisis. While there is a general public discussion on adapting to urban water deficits, they have little or no resonance in policy agendas except at COP meetings or multilateral forums. Governments and communities both need to understand the stakes here, especially for the poor. At this point, only 20 percent of Pakistan has access to clean drinking water, while the rest consume fecal and industrially contaminated toxins. Lead and arsenic are now endemic to the Indus plain, while our per capita usage of water is, wait for this: the highest in the world.

According to the UN (and not some fly-by night data-creator), Pakistan will officially be water scarce by no distant century, but by 2025. Given that Pakistan is principally glacial-fed, unlike India which is monsoon-fed, we are not in a position of comfort to allow strategic drift.

Water is what powers our homes, lives and agricultural economy. Yet it is agriculture that consumes most of our ground water, and poor sanitation that contaminates our drinking water. A policy change by governments to incentivize crops that consume less water is needed urgently. In sugar, wheat and rice we export out our virtual blue water in spades, for instance. If the rapacious British Raj could build Punjab the largest man-made irrigation system in the world, why can’t postcolonial governments focus on structural needs instead of just hot topics? Drip and modern irrigation needs to be discussed on television shows instead of politically divisive and ecologically inefficient big dams. For citizens, it is home-conservation, recycling, eating less meat and reducing plastic waste which is needed, for a start.

At the end of the day, governments have to act and lead. In Pakistan, the federal government has to have convening power and political goodwill to make the policy gridlock work. We are not an ethnically homogeneous country. The federation must generate both transparent data, political will and public policy to connect the dots across the provinces to overcome the governance crisis in Pakistan today.

Without such common goals connecting the resource and capacity dots to create resilience, Pakistan will not be in position to mitigate let alone manage the upcoming crises.