The Indo-Pacific shift: a struggle for power 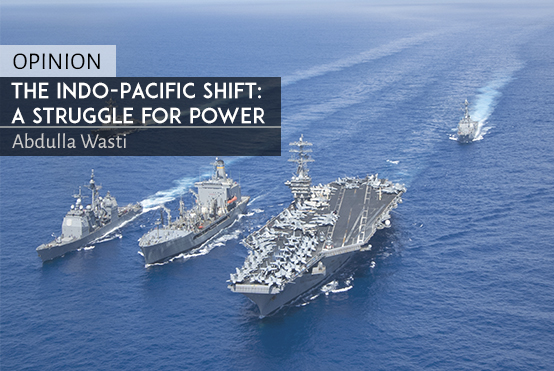 The recently held virtual meeting of the Climate Summit between US President Joe Biden and Chinese President Xi Jinping might have initiated some meaningful contact between the two states, but it has not broken ground on resolving the lingering US-China trade war disputes. The proceedings also established that both states continue to see the Indo-Pacific region as a contestable ground in the immediate future.

Overall, the multilateral balance is in bad shape: the US is increasingly looking inward rather than at global interests. Some have hoped for another US moment of ‘splendid isolation’, but the US retracting its commitments across the world is unlikely, especially in the face of China’s relentless economic surge. China is not just an economic superpower, but a diplomatic and development behemoth as well. Russia has also established control and power beyond its borders, not least through the provision of arms and controlling global energy supply chains in Europe.

The US has always relied on allies to compete for global hegemony, but this is easier said than done in the existing global structure. There would have been hope for reinvigorating the Pax Americana, had the US not dashed its support among European allies and enabled a spate of new alliances such as AUKUS and the Middle Eastern QUAD that push America’s narrow security agendas, where instead there are opportunities to leverage in global diplomacy, development and economic connectivity. The fate of Nato and even the UNSC hangs in the balance, with a growing conflict resolution mandate but waning resources and conviction to lead.

In the Indo-Pacific, broadening relationships and coordination with Australia, Japan, and India continues to remain a priority for the US. China, on the other hand, is looking at more economic cooperation as a means to spread influence and gain access to important markets and trade routes.

AUKUS and defence agreements with India (BECA) in recent years clearly identify China as the main threat. The next order of business for the US in this sphere would be to increase defence cooperation between its partners – closer contacts of India with Australia, New Zealand and the UK for more cooperation in the Indo-Pacific.

While Australia views its alliance with the US as the cornerstone of its security policy, China is also a major economic partner for Canberra. But the deal through AUKUS to buy nuclear-powered submarines is a primary example of Canberra looking to reassert itself in its maritime backyard. The erosion of the relative position of the US vis-a-vis China is also driving Australia to engage more directly in the Indo-Pacific region and to encourage the development of a new regional architecture.

Alliances aside, good old ‘hard’ defence capabilities continue to dominate national budgets with significant spending on both sides. A look at the numbers of total defence spending of the US and China, however, indicates that the ‘competition’ the US refers to is actually skewed in favour of Washington. Even the most inflated estimates of China’s defence spending put the number somewhere between $35 billion and $65 billion a year. These figures pale in comparison to corresponding US data, which indicates defence spending was $766.58 billion in 2020.

This basic disparity will not change anytime soon for several reasons. First, China still has a number of economic challenges to overcome before it can plough unlimited resources into building its capacity to invest in its defence. Second, even if China specifically looks to compete with the US military in both quantity and quality, it still has to play catch up. The US-owned ‘capital stock’ of modern military equipment is valued at roughly $1 trillion; China’s defence assets at this point amount to $100 billion in comparison.

There is also still some scepticism regarding China’s parity with the US in the oceans. Beijing is set to operationalise its first aircraft carrier soon according to satellite images, but the exact date is still unclear. There are estimates that this could happen anywhere in the next three to six months. The US in comparison already has 11.

However, technological advancements and greater research and development of technology might help speed things up for China. The recent hypersonic missile test looks to have US-based experts worried. The missile was launched from China, went around the world and then deployed a payload on a target in China, meaning that China could soon be capable of circumventing missile defence systems on the furthest targets. These developments have led to rising tensions, which places a significant burden on the international system as the risk of conflict is enhanced, especially with the US militarising its Asia policy. The camp formations that are taking shape or are being imposed perhaps by an over-anxious American establishment are reminiscent of a forced polar mentality that will be detrimental to the interests of the region in the long run.

At another level, at the bilateral summit, Biden briefly addressed China’s “unfair trade and economic policies” and how they harm American workers, and raised concerns about human rights abuses in Xinjiang, Tibet and Hong Kong, while reiterating American support for Taiwan. Despite their differences and continued trade war, both countries do seem wary of the responsibility that falls on them to put guardrails on potential economic and geopolitical conflict between them flaring up into the unmanageable diplomatic or kinetic realm.

The US and China both pay high taxes on each other’s imports as a consequence of the trade war that began between the two under Trump in 2018, that ultimately resulted in escalating import tariffs and subsequent supply chain disruptions affecting businesses and individuals worldwide. Under the still unresolved trade war, China is still more than $180 billion short of a pledge to purchase $380 billion in American products before a deadline of December 31, 2021. While the recently held virtual meeting of the Climate Summit between Joe Biden and Xi Jinping has ushered in some optimism regarding engagement between the two states, it has not broken ground on resolving the lingering US-China trade war disputes.

The Indo-Pacific is likely to remain a hotbed of tension and arms build-up with no actual conflagration of violence in the short and medium terms. At the moment, the issue of Taiwan has been identified as the potential matchstick that could turn tensions into something uglier. However, all indications by the US point to a hesitation to engage, because one misstep could lead to an extended conflict that spills beyond the Indo-Pacific waters. For now, both sides will have an uneasy impasse and continue defence spending with heedless arms hoarding. The competition for extending power over the Pacific is very much on.

A version of this article was published in The News