The pursuit of strategic autonomy 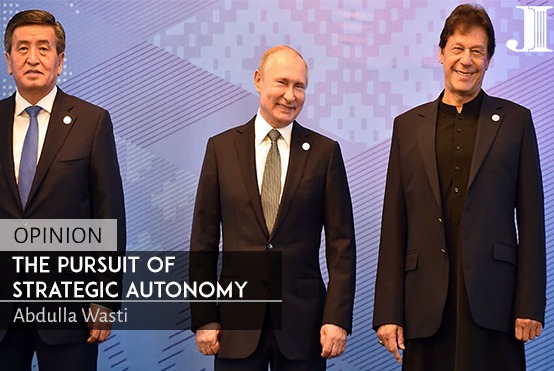 The recently held democracy summit ended up being another iteration of a world being divided into binaries. While the summit was underpinned by the recurrent American foreign policy trope of choices to be made between good and evil, and democracy and authoritarianism, in essence, it signalled the American need to counter the growing influence of Beijing across the world, and most particularly in the Indo-Pacific.

The perception among several countries is that the US convened the summit to require them to make a choice between Beijing and Washington, rather than a meeting to advance the cause of democracy. Islamabad too, clearly had the same reading and declined the invite, which came as a surprise to many. The rationale provided was that Pakistan does not want to get drawn into zero-sum camp formations and wants to foster good relations with both the US and China. With Asia and its international waters becoming the main theatre of Sino-US confrontation, the conditions today increasingly resemble the situation in Central Europe that bore the brunt of the US-Soviet confrontation. The challenge of navigating an independent foreign policy given the evolving dynamics in the region is something that several countries are grappling with at the moment and Pakistan is no different.

In such an environment, the dilemma for many states is whether it is possible to chart an independent foreign policy and to protect their strategic autonomy. Pakistan is, by its own admission, attempting to do the very same. The obvious question is how can it do so in a manner that does not sabotage its current relationships with key stakeholders, while maximising its own interests? Without delving into the merits or passing value judgements on the outcomes of those decisions, there are lessons to be learnt from the cases of India and Turkey, both of which have illustrated that agency can be exercised in such a complex environment.

For decades, India’s foreign policy has been described as being centred on the concepts of non-alignment and strategic autonomy. While many would claim that India has indeed chosen a camp by positioning itself as the bulwark against China in the region—and that is true to an extent—it has at the same time managed to walk a tightrope and maintain its relations with strategic competitors of the US such as Russia. Despite its growing proximity to the US, New Delhi and Moscow recently held a strategic dialogue to discuss reinforcing bilateral ties and also signed a slew of defence agreements. India’s missile system deal (S-400) with Moscow has also put it at risk of US sanctions under CAATSA, yet New Delhi continues to navigate its defence relationship with Russia quite adroitly. Similarly, despite its divergences with Tehran over several issues, particularly Afghanistan, India has continued its engagement with Iran in areas of shared interest. This approach certainly provides a blueprint to other states in the region—that some autonomy can be exercised in order to preserve national interests.

Turkey offers another compelling case in this regard. Changing global dynamics in recent years have forced Ankara to pursue a more independent foreign policy defined by improving its relations with countries like Russia, Iran, and China. In fact, when its interests diverged from those of its NATO and EU allies, Turkey pursued unilateral diplomatic and military initiatives by joining the Astana mechanism together with Russia and Iran or even pursuing its own energy exploration in the Eastern Mediterranean. How this shift has panned out for Turkey is a different debate altogether, but it does at the very least illustrate that complex international environments can be navigated by states without being boxed in.

Of course, contextual peculiarities in each of these cases need to be factored in as every state faces a different set of circumstances and constraints. Both India and Turkey possess economic leverage which countries like Pakistan lack at this point in time. However, there are other examples too of countries like the Philippines and Thailand—treaty allies of the US—which also maintain strong ties with China. In fact, many states in Southeast Asia, despite their close ties with the West, continue to oppose a new Cold War and are reluctant to choose sides between China and the Quad.

Bangladesh perhaps offers the closest parallel to Pakistan. Now being categorised a middle power owing to its economic successes and graduation from a Least Developed Country (LDC) status, Dhaka has been setting a precedent of bold geopolitical conduct in the region. This is evident based on how Bangladesh has neatly maneuvered between China, India, and the US in an increasingly bipolar world. What this illustrates is that emerging powers can reject foreign policy strategies of appeasement and alignment, while still being capable of using their limited influence to achieve the best possible outcome for themselves. There is a widespread consensus in the policy community that Bangladesh is pursuing the path of being open to the best possible economic cooperation that serves national interests while pursuing a foreign policy of neutrality in a region of multiple contests.

Of course, Bangladesh’s confidence in its geopolitical conduct comes from its steady economic development, something Islamabad has been struggling with. Pakistan’s growing debt exposure now increasingly limits its ability to exercise options in pursuit of an independent foreign policy.

Lacking the conventional source of economic leverage, Islamabad is forced to be creative with what it can offer. One avenue would be to build on soft power, however while the idea does have currency domestically, there is a long way to go before we can master that terrain. Keeping these constraints in mind, Pakistan’s best bet is to leverage its position as a connectivity hub. While it has been making significant strides, Pakistan must continue its pursuit of connecting a variety of stakeholders through their shared economic interests. While CPEC has been beneficial in terms of improving Pakistan’s logistics infrastructure and attracting foreign investment, it must look to broaden its vision of regional integration. In fact, positioning itself as a nexus for cooperation between powers and an active pursuit of connectivity as a policy priority will also help ease security pressures. Adopting a more independent approach does not translate into shunning alliances, but instead requires smart statecraft for juggling and maintaining a presence in competing camps while extracting maximum dividends that first and foremost serve national interests. For this to be achieved however, those steering the wheel will have to be wary of a couple of things. First, public retorts and clapbacks do more harm than good. Second, it is imperative to build consensus on each and every move in this complex environment to gauge how it will be perceived by multiple camps—declining participation in the democracy summit is one example. Lastly, non-alignment and strategic autonomy are not part of an unchanging ideological framework, but are concepts that need to be deployed depending on the conditions being confronted at that point in time.

A version of this article was published in The Nation