The Season of Climate Migrants 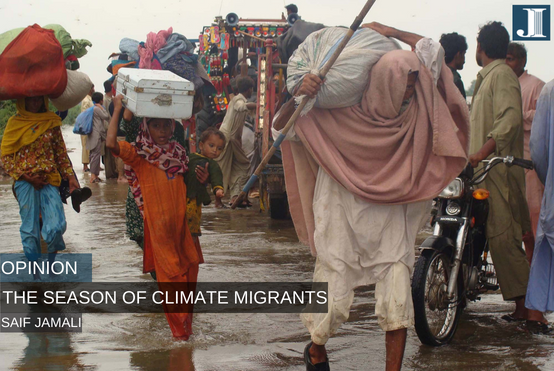 Human migration is the single most disruptive outcome of climate induced stress, as seen over decades across the world. A stark reminder of the same has been unfolding in Pakistan since mid-June. Caught in the midst of these unabated monsoon cycles and epic flash floods, a sea of vulnerable, and now displaced, people, are in the process of leaving behind their homes and villages in search of some much-needed climate respite. Looking at the available data for Pakistan, when assessing distress caused by rising sea-levels, water stress, crop yield reductions, ecosystem loss and drought, an estimated 680,000 persons were displaced in 2020 alone. These figures don’t account for climate catastrophes of the type being witnessed at the moment, with one-third of the country under water, and still project a three-fold increase by 2050; painting the actual picture to be a lot gloomier. For Pakistan to prepare for this large human displacement, a climate migration policy is the first necessary step in alleviating the multiple humanitarian crises that stem from it.

NDMA has estimated the current pre-monsoon and monsoon onslaught to be 189% higher cross-country, compared to the average of the last three decades. In the case of Balochistan and Sindh, these numbers rise to an astonishing 435% and 462%, respectively. Apart from more than thirteen hundred lives lost to the flash flooding, an estimated one million houses and hundreds of kilometres of roads and bridges have been swept away, cutting off many remote impoverished communities from access to food and basic amenities. While relief efforts are being mobilised, a large segment of these millions of affectees will have to temporarily migrate away from their home-grounds, with many of them either choosing to, or forced to, permanently settle elsewhere.

Migration resulting from climate change is an underexplored area, as research studies on the human impact of climate change have recently been initiated across the world. The current research categorises migrants into three groups: individuals compelled to move in search of better livelihoods, leaving behind families that subsist on deteriorating natural environments; groups (usually families) who plan their relocation as the natural environments threaten their lives and livelihoods; groups forced to move due to rapid onset hazards. Each of these cohorts transition with dissimilar resources, capacities and vulnerabilities that need to be catered for.

Research also indicates that a majority of climate migrants are poor. In Pakistan, three fourths of climate migrants rely on agriculture, livestock, forestry or fisheries for their survival, and continue to work in these domains through their migration trajectory. Climate-induced stress exacerbates poverty for many of the rural poor, in addition to undermining their food security. Events like the current monsoon spell, completely wipe out any semblance of socio-economic resilience that they may have. The advent of floods and erratic precipitation means uncertain harvesting cycles for years to come, forcing millions to sell their meagre assets, and prioritise family survival over education or alternative life choices.

Currently the unfolding climate catastrophes are geared to impact the rural poor the most, but it is only a matter of time before they start jolting other socio-economic groups the same way. For sure, those with better resources will have better coping mechanisms that last longer, but there is a time cap looming over this. Reports suggest that the current pace of rising sea level in Karachi, Pakistan’s biggest metropolitan city, will be completely submerged by 2060. Other coastal cities in Sindh, including Thatta and Badin will have undergone a deluge a decade earlier than that. If the ongoing record-breaking monsoon rains are anything to go by, the flood is getting bigger each year, and there is precious little that municipal authorities can do to combat it.  In sharp contrast, parts of South-West Balochistan to South Khyber Pakhtunkhwa have been experiencing such a severe drought over the last couple of years that nearly 33 percent of the population from districts like Chaghai and Kharan have been forced to migrate away from their land.

Climate migrants almost always move towards local urban centres, negating the ‘international border anarchy’ myth. Evidence bears this out – in the largest breakouts of famine or flood over the last century, climate affectees transported themselves to cities which promise food in return for labour. Over the last two decades, more than 1.2 million people have migrated from the Indus delta to Karachi, due to the shrinking of its wetlands. This unplanned, and at times forced, movement towards cities has a knock on effect on social services, employment and security. Urban stress and strife are familiar outcomes now characterising Karachi, Lahore, Peshawar, Multan and Islamabad.

This is not to say that no efforts have been made. Pakistan’s Framework for Implementation of Climate Change Policy (2014-2030) talks of the threat posed by climate induced migration and offers a strategy to “develop infrastructure and support facilities in smaller agro-based towns and periphery urban areas to check rural-to-urban migration”. The framework suggests three strategies as a means to curbing rural outmigration: through upgrading basic amenities to rural populations; by generating greater employment through industrial transformation; and, building the required infrastructure and offering services that allow for movement of goods, instead of labour.

This may seem a daunting task, but there is ample precedent in South Asia, where similar initiatives have curtailed the worst effects of climate stress in rural areas. In Bangladesh, as part of the state’s broader vision towards ‘transformative adaptation’, a small town by the name of Mongla was transformed into a major export processing zone to divert climate refugees away from Dhaka and lessen the pressure on the capital. This was achieved through strengthening the infrastructure of the town and implementing resilience measures to safeguard it from climate stresses. In Pakistan’s context, incorporating a climate quotient to SEZs set up under CPEC would be relatively easier to do, with the renewed push to revitalise these projects. Blue economy projects being planned in the Indus Delta are also important initiatives that will reduce the extreme vulnerability of fisherfolk communities and focus attention back on the destroyed ecosystem.

Federal and provincial policy initiatives may be moving in the right direction on reducing climate stress in rural communities, but climate degradation is outpacing all our efforts. A migration policy is needed to recognize and address the specific challenges of environmental refugees, many of whom are forced to migrate repeatedly to ward off poverty and disease. Women migrants, especially, suffer from trauma caused by losing children and other family members to climate catastrophes. These challenges must be seen in a more urgent humanitarian light, away from macro-adaptation debates on developing community resilience in the long term. Pakistan’s climate migrants and refugees are on the move right now, outside the margins of systemic provisions, and most allocations of survival goods. In the disaster relief missions underway in every province at the moment, some refugees will inevitably interact with rescue teams to receive emergency rations and safety kits, or even be evacuated to safety. But almost none of them will be comprehensively rehabilitated, and end up in greater destitution and uncertainty than they saw previously.

Climate stress is growing with each passing season in Pakistan. There is no option but to immediately commence adaptation efforts that create some measure of climate proofing against extreme weather events and catastrophes. This time it is relentless rainfall, next time it may be something else; making this transition untidy, costly and time consuming. Yet in the short term, the lives and livelihoods of climate migrants must be safeguarded through all available means. The highest cost will continue to occur because of indifference.