After India’s Skirmish with China, Is Pakistan Next? 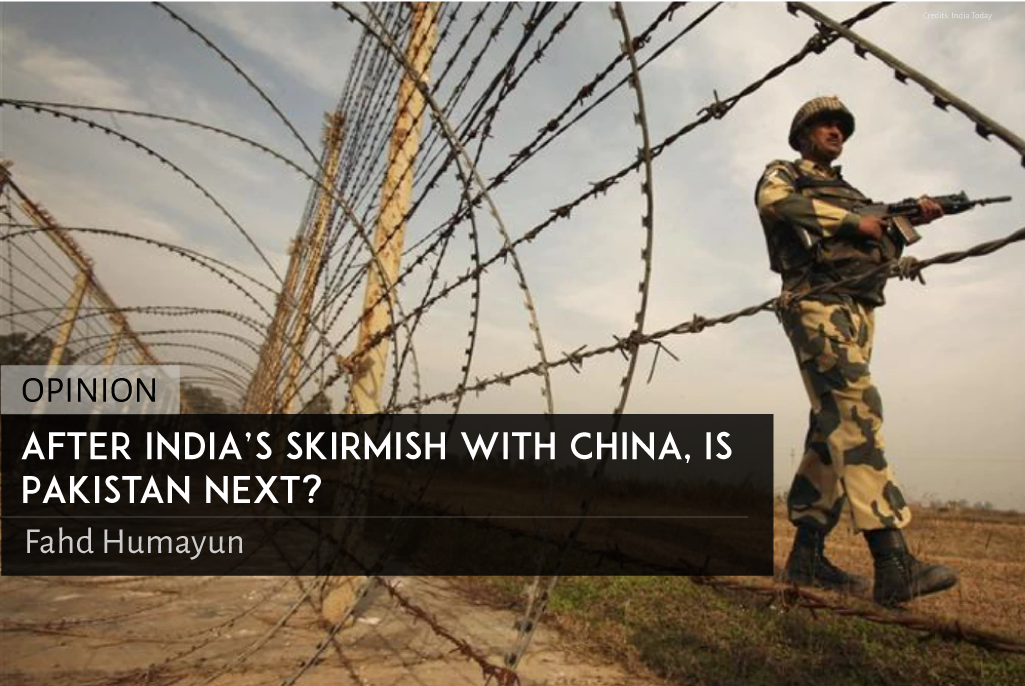 The worst border skirmish between India and China in the Himalayas for decades has abated for now, but the potential for crisis still looms large over a nuclear-armed South Asia. Last week, India announced it was formally downgrading relations with Pakistan, by reducing the staff at its High Commission by 50 percent. The last time India asked for a similar reduction of embassy staff was in 2001, following an attack on the Indian Parliament. Bilateral ties between the two sides have been shunted since New Delhi unilaterally revoked the special status of the disputed territory of Jammu & Kashmir on August 5 last year and intensified a draconian crackdown in the occupied Valley.

So what exactly does the dust-up with China have to do with Pakistan’s relationship with India? In short, there are five reasons why June’s Himalayan standoff increases the likelihood of a fresh India-Pakistan crisis.

First: India’s muted response to China in the aftermath of the Galawan Valley skirmish has raised difficult logistical questions and reputational concerns about New Delhi’s much-touted role as counterweight to China in the Indo-Pacific. Although New-Delhi adopted a position of non-alignment for much of the Cold War, its potential as a regional diplomatic and military bulwark against a rising China took on new significance after U.S. President George W. Bush sought to enlist it as a strategic-partner and approved the sale of U.S. nuclear technology to the country. More recently, New Delhi and Washington announced an expanded defense partnership, including $3 billion in arms sales.

Yet hostile encounters with China in both 2017 and again in 2020 have underscored for Indian policymakers the need to get along with Beijing if only to sustain a mutually feasible cohabitation; informal summits such as those in 2018 and 2019 were driven by this strategic necessity. In the aftermath of the most recent crisis, corps commander-level talks and diplomatic negotiations between Beijing and New Delhi mean India is likely to prioritize a minimum-working engagement with China over an unambiguous geopolitical rivalry that would come with fully partnering with the United States. Meanwhile, the political compulsion to demonstrate military capability— that too in the face of a conventional balance of forces that has shifted in China’s favor—may impel India to look elsewhere to offset suggestions of strategic impotency. If military capabilities drive policy choices, then the theatre with Pakistan is a suitable foil for perceived Indian weaknesses compared to China.

Second, since coming to power in 2014, Prime Minister Modi has demonstrated both a willingness and capability to deliver on nationalistic pledges at home, especially when his government’s ability to deliver on the economic front has hit snags. Although India has seen its GDP growth fall to its lowest rate in the last 11 years, the BJP has sought to consolidate its political base by doubling-down on its nationalistic pledges—from revoking the special status for Jammu & Kashmir (disputed between India and Pakistan since 1947) to rebuilding the Ram Temple over the disputed site of the Babri Masjid.

Research shows that leaders looking to divert attention tend to target traditional enemies and enduring rivals (as conflict against such persistent adversaries is most likely to promote in-group solidarity), and diversionary conflicts are particularly likely to take the form of territorial disputes. Since the controversial measures in Kashmir last year, India’s politicians have systematically upped the bilateral ante with Pakistan by declaring intent to “secure” Azad Kashmir and Gilgit-Baltistan. Earlier this year, India’s new Army Chief said the Indian Army was “ready to seize control” of Pakistani territory if directed by the Indian government; the same month India’s Prime Minister Modi said India needed 7 to 10 days to defeat Pakistan in war. Just a fortnight ago, India’s defense minister reiterated that taking Pakistani Kashmir was now a “stated goal of India’s Parliament.”

Customarily, such statements might be put down to cheap talk—except in this case, the BJP’s own track record of follow-through suggests these threats should be taken seriously. Operationally, the Indian Army has begun to set up artillery strikes deep into Kashmiri villages, to launch long-distance fire into Pakistan-administered territory. In May, after months of deliberation, the Indian Meteorological Department began to list Skardu and Muzaffarabad, which are on the Pakistani side of the border, in its own internal weather reports—an unprecedented development.

Third, while tempers and temperatures arguably cool on the Sino-Indian front, memories of a short but tense air duel between India and Pakistan two Februaries ago are still fresh in both Islamabad and New Delhi. While Pakistan shot down an aging, Soviet-era Indian MiG-21 Bison and captured and returned an Indian pilot in the dogfight, India claimed it had downed a Pakistani F-16. The air-duel over Kashmir quickly escalated into a war of narratives: Pakistan rejected India’s allegations and asserted it had lost no jets.

In the days after the dogfight, the New York Times ran a story about the implications of India losing a plane to a country whose military was half the size and received a quarter of the funding. India’s right wing Shiv Sena has since called for more “surgical strikes” on Pakistan to consolidate the BJP’s grip on Kashmir. Furthermore, when Indian papers ran headlines of India having killed “300-400 terrorists” in an airstrike on Balakot last February, Pakistan countered that the targets had been “little more than rocks and trees.” Since last year, India’s opposition too has on various occasion taken swipe at Prime Minister Modi for the Balakot episode; pollsters meanwhile have disputed the extent to which the Balakot strikes actually buoyed the BJP in its 2019 electoral victory. The “decider’s dilemma” for Modi is that the unfinished business from the Balakot standoff needs a less ambiguous final chapter, short of which the BJP risks being domestically perceived as having backed away prematurely from a weaker enemy.

This leads to a fourth and crucial point: successive regional crises under the BJP mean that the domestic costs for India’s leaders to not be seen as backing down against external adversaries is growing, not diminishing. In the standoff with China, losses incurred by the Indian Army have been a shot-in-the-arm for India’s opposition politicians who have been quick to condemn the BJP for its lack of preparation and in some cases for surrendering entirely. Conflict with Pakistan could be a much-needed salve for a disheartened Indian media that is largely controlled by the Indian ruling party: according to analysis conducted after an attack on military convoy in the disputed territory of Kashmir last February, Modi got near-total media coverage despite energetic campaigning by India’s opposition at the same time. Bringing up the threat of a salient out-group could help the BJP re-energize its patriotic and supportive base, and paper over divisions in its coalition.

A final factor that explains why the China-India standoff may spill over into tensions with Pakistan has to do with the White House’s current occupant: President Donald Trump. Proponents of a strong Indo-U.S. relationship have lobbied hard to present a positive image of bilateral ties, buoyed largely by symbolic spectacles. On the critical economic front leading up to the COVID-19 crisis, however, both the Indian economy and U.S.-Indian economic relations were on a downward trajectory. Trump has at least thrice offered to mediate the India-Pakistan conflict over Kashmir, the highest U.S. official to do so since President Clinton after the two sides fought a short war over Kargil. New Delhi has traditionally been allergic to the idea of third-party mediation, referring to the 1972 Simla Agreement between India and Pakistan under which both sides agreed to bilaterally resolve outstanding disputes. Ironically, the same Simla Agreement also held that neither party would unilaterally alter the situation in Jammu & Kashmir—a position India itself compromised by altering Kashmir’s special status last August. Ties between the United States and Pakistan, meanwhile, have seen a steadying in recent years, in part because of Pakistan’s facilitation in helping the United States reach a truce with the Taliban in Afghanistan. The absence of guaranteed validation from Washington on New Delhi’s position toward Pakistan thus makes India less, not more secure, and likely more convinced that it will need to rely on its own strength and power to clearly delineate its territorial and political interests for the foreseeable future.

While an India-Pakistan crisis so soon after India’s standoff with China is by no means a forgone conclusion, current trends suggest it could. In the past, troubled leaders have rationally pursued risky, high-variance strategies of initiating another conflict to gloss over the failings of earlier scrambles. With the domestic and regional environment ripe for the taking, South Asia’s next crisis may happen sooner than we expect.