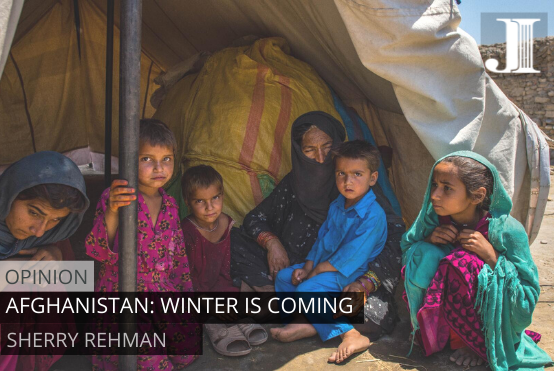 South Asia faces a perfect storm with the growing risk of an unstable Afghanistan, coupled with divided views in the international community on who must take responsibility for the strategic rubble of the American exit from the country. Despite the fact that the Taliban regime is unable to bridge the gap between promises of inclusive governance and a reality where girls cannot go to secondary school, the stark truth is that a humanitarian catastrophe will impact exactly those vulnerable citizens that the international community seeks to protect. The broader context is that, within a decimated Afghan economy and diminishing trade lifelines from neighboring countries, 97 percent of Afghan citizens now face the looming risk of acute poverty by 2022.

While this shocking appraisal was made recently by UNDP Afghanistan, and prompted world leaders to pledge more than a billion dollars in Geneva in response to the UN Secretary General’s appeal to overturn “Afghanistan’s most perilous hour”, the gap between pledges and cash streams is always too big to manage aid delivery models. Even if the United Nation’s luck holds on the pledges that well exceeded the appeal for funds to avert a disaster in Afghanistan, the problems lie in the capacity for aid governance, or lack thereof.

By October 25th, the World Food Programme pushed out a catastrophe alarm, saying that 22.8 million Afghan lives and livelihoods face acute hunger, including four million people in remote areas who urgently need food supplies before the winter snow closes routes down. Prolonged drought in parts of the country, COVID, and severe losses to this year’s wheat crop has created this crisis. Food inflation has jumped by 50 percent, whereas other daily goods like petrol now cost 75 percent more.

“The problem of aid distribution and delivery mechanism is of course not new. Distribution mechanisms have been compromised by corruption and misgovernance even before the Taliban took over. Now they are entirely missing.”     Sherry Rehman

Recent cargo flights have brought in badly needed medical supplies and other relief, but there is need for much more help. Ten million children need humanitarian assistance to survive; whereas 3.2 million children under five years are already suffering from acute malnutrition in Afghanistan. Uncertainty around aid throws the Sehatmandi project in jeopardy, the country’s vital source of primary and secondary health care for 31 out of 34 provinces in Afghanistan, whose 2,000 clinics and health facilities cater to millions of citizens. Healthcare professionals have warned that thousands of preventable deaths will occur only on account of COVID-19, if Sehatmandi cannot continue.

Before the Taliban assumed power, COVID-19 had already contracted the Afghan economy and increased urban poverty to 45.5 percent from 41.6 percent in 2020, whereas 34.3 percent of the employed population lived below the $1.90 per day threshold. With dramatic economic shocks after the fall of Ashraf Ghani’s government, poverty rates are expected to shoot up as much as 97 percent. There is a confluence of unfolding crises within this, including internal displacement, migration to cities, capital flight and the return of opium and other illicit trade that sustains a war economy.

The problem of aid distribution and delivery mechanism is of course not new. Distribution mechanisms have been compromised by corruption and misgovernance even before the Taliban took over. Now they are entirely missing. The Ghani administration governed through famously corrupt elite networks that controlled wealth and decision-making within “Kabulistan” to an extent that few benefits ever reached ordinary Afghan citizens. Survey after survey by international monitors throughout the last decade reported that Afghans saw their government as predatory; that corruption was endemic and public office was open for purchase. Afghanistan consistently ranked between 1 and 2 out of 100 for rule of law and political stability over ten years, according to World Bank assessments. 64 out of 364 districts did not have any government civil office by 2019, and the social sectors were all in decline since 2014.

As winter sets in, and Taliban capacity to manage predictability and aid supply chains continues to be in freefall, things look even worse. Inexperienced as they are in governance (the previous regime led by Mullah Umar is an unrealistic template in 2021), the interim cabinet is probably going to learn several hard truths about mechanizing food and health care provision for a population of 40 million people, to name only two areas that need urgent intervention. Women, who remain at risk, like minorities, will be the worst hit if pledges don’t come through, or don’t reach rural Afghanistan.

The crisis is real. Pictures of Afghan children starving to death on the streets of Kabul are not fake. 8.7 million people are already at the emergency level. Financial contributions, food and medical assistance must reach these Afghans. Two of the four crisis models projected by the UN are centered on trade with Pakistan, underscoring the necessity for trade lifelines flowing through Torkham and Chaman border crossings. As became especially evident during the COVID-19 period, several provinces bordering Pakistan and large parts of the populace depend on the trade in consumer perishables coming in via Pakistan. This trade is slowly picking up once again.

The Taliban regime may not see aid as an incentive to change or respond to it as a policy lever. But UN chief Anthony Guterres is right in saying the Afghan people “cannot suffer a collective punishment because the Taliban misbehave.” In the end it is the UN, whose timely alarm has reminded Western powers to prioritize Afghanistan’s humanitarian crisis over regime considerations, has not fled the scene, and is organizing the daily heavy lift of whatever aid comes through, assisted by Afghanistan’s civil society bedrock. This is the Afghanistan that can’t be let down.

A version of this article was published in arabnews