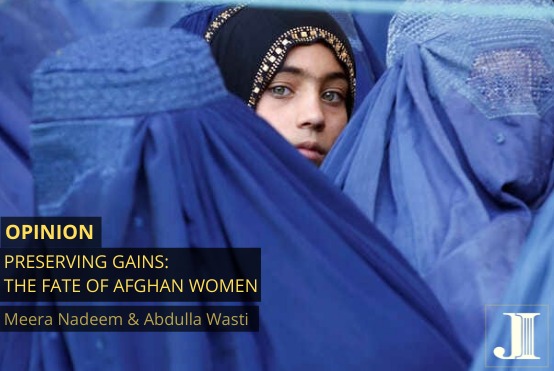 As the map of who controls Afghanistan changes by the hour, the most affected on the ground remain women and children. Over the years, in all the wars fought in Afghanistan, Afghan women have increasingly been the leading casualties of deliberate and systemic violence, most defenseless against hunger, injury, disease, forced military servitude and sexual exploitation. Now, just a month into the US troop withdrawal, 11 provincial capitals and 19 major cities have already collapsed under the control of the Taliban i.e. over 65 percent of the area. Tens of thousands of Afghans have fled for safety to the north in Kabul, leaving behind their jobs, homes, and belongings. There is no guarantee of safety there either however, as the Taliban now prepare to march towards the capital. In these areas that have fallen to the Taliban, civilian deaths are up by nearly 50 percent and more women and children have been reportedly killed and wounded in the country in just the first six months of 2021, more than any year in that period since 2009.

As more cities fall to the Taliban, an entire generation of Afghan women who have taken their place in society by working for two decades to help grow civil society and generate opportunities for their future generations are now watching their life’s work and struggle being reversed. These women entered public life as professionals and made real progress in the fields of health, civil rights, law, education and governance. From a collapsed health care system with no medical services available to women during the Taliban years, in the post-Taliban regime, by 2018 over 87 percent Afghans were given access to 3,135 functional health facilities. As a result, there was a significant reduction in maternal mortality, as women’s life expectancy grew from 56 years in 2001 to 66 in 2017, and their mortality during childbirth declined from 1,100 per 100,000 live births in 2000 to 396 per 100,000 in 2015. In 2003, less than 10 percent of girls were enrolled in primary schools; by 2017, that number had grown to 33 percent, while female enrollment in secondary education grew from six percent in 2003 to 39 percent in 2017. Thus, 3.5 million Afghan girls were in school with 100,000 studying in universities. By 2020, 21 percent of Afghan civil servants were women (compared to almost none during the Taliban years), 16 percent of them in senior management roles; and 27 percent of Afghan members of parliament were women.

Major legal wins for Afghan women are also under serious threat, including laws like the Elimination of Violence Against Women (EVAW) of 2009, and Article 22 of the 2004 constitution which ensured equality for men and women for the first time in Afghanistan’s history, and the guarantee of no discrimination on that basis. It goes without saying that despite large gaps in implementation, these laws run the risk of soon being eliminated completely under the Taliban.

Swathes of Afghan women are now being told by the Taliban that they cannot leave their homes without a male escort, they cannot work, study or dress as they want. While the Taliban officially state that they no longer oppose girls’ education, very few actually allow girls to attend school post-puberty. As it stands, many schools and colleges have already been shut, cutting access to school for thousands of girls since last year and several businesses already destroyed. This has far-reaching consequences, from the role women play in shaping their future generations to donor support that keeps Kabul’s hospitals open and government workers paid. Moreover, in some areas, the Taliban are reportedly going door-to-door compiling lists of women and girls for their fighters to forcibly marry.

Such worrying indicators should raise alarm bells across the international community, however other than the usual lip-service there is a deafening silence on how the erasure of gains for women’s rights can be prevented. There is a feeling that key actors are now shirking any responsibility on how the situation on the ground is deteriorating for women and children. The most noticeable change is evident in how the stance of the US has evolved—or rather devolved—in relation to the importance of supporting the women of Afghanistan. The words of former First Lady Laura Bush where she equated the fight against terrorism with the struggle for the rights and dignity of women now sound hollow. The plight of Afghan women and girls characterised much of the Western rhetoric around the 2001 invasion of Afghanistan. Twenty years later, as US forces rush for the exit, only parochial strategic interests matter.

As the fighting in Afghanistan intensifies by the day and the Taliban continue to expand their territorial control, many donor countries are now scaling back their funding, which includes support for programs that are vital for women’s rights. Declining donor support—which makes up for 75 percent of the Afghan government’s budget—is of serious concern. Commitments from the US, the EU, Germany and the UK are either in flux or dropping steadily. During a conference in Geneva last year, donor pledges for 2021-2024 were between $12-13 billion, which marks approximately a 20 percent drop compared to the four-year period before. Some donors now claim that their efforts were never going to bear fruit in Afghanistan, and that bringing about change is an impossible task. However, this despair is an affront to the millions of women on the ground who are fighting for their survival. Even if incremental, there has been notable progress as indicated by declining maternal mortality and significantly improved access to key health services. There is of course much more to do, but these gains need to be protected and expanded going forward. Continued engagement and funding will be instrumental in this regard because there are local organisations and activists who will continue working on the ground, and they will undoubtedly require the support of the international community.

There is a lot at stake for an entire generation of Afghan women who have carved out their place in society are now watching that space shrink. These women entered public life against all odds and took up roles in various sectors to serve their country, yet now there is a question mark hanging over their journey. Activists who came of age in the two decades following the US’ 2001 invasion are left to decide their own fate, with little help from their former allies. It now remains to be seen how much further the situation will deteriorate, and to what extent the international community will support them diplomatically, politically and economically. Judging by the ongoing trends and apathy on display, the answers to the above questions are disconcerting. Afghan women rightly feel betrayed as it now appears that their movement for rights was opportunistically appropriated, and could potentially be pushed back decades. It would signal a failure of the international community if the scant gains won by women and girls are allowed to disappear. History will be far from kind to those who turn their backs on the women of Afghanistan at this critical juncture.