The Anatomy of a Taliban Ceasefire 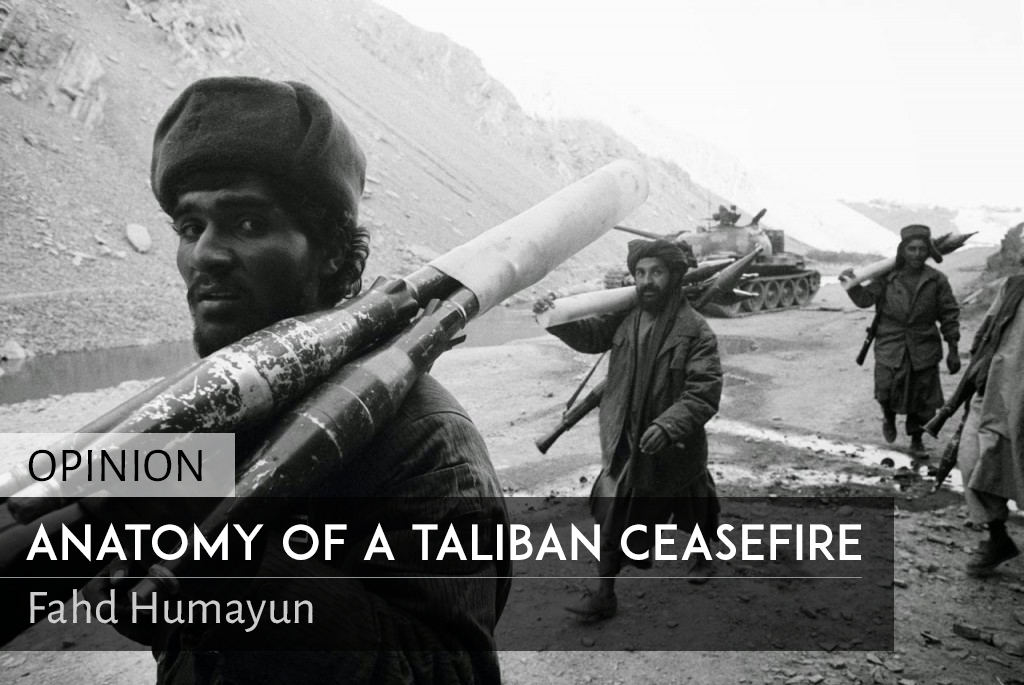 After months of regional stalemate, two events in June offer a potential roadmap for achieving a working peace.

The first was the Taliban’s decision to accept Afghan President Ghani’s offer of an Eid ceasefire, followed by the peaceful movement of fighters and soldiers into territories controlled by the other. The ceasefire lasted 72 hours. The Taliban chose not to extend it. The second was the decapitation of Pakistan Taliban commander Mullah Fazlullah in northeastern Kunar, where he was given shelter after fleeing Swat in 2009.

Taken together, these events signify the first major breakthrough since Pakistan attempted to broker talks between the Taliban and the High Peace Council in Murree in 2015 before the process was aborted by leaked news of Mullah Omar’s death.

The events of this June raise several questions. What motivated the Taliban to accept President Ghani’s offer of a ceasefire, while they were sitting comfortably on territorial gains? Why did the insurgents choose not to extend it, when Kabul explicitly expressed its willingness to do so? What are the implications of the three-day ceasefire on Islamabad’s equation with Kabul?

Their answers require an understanding of how the ceasefire was reached. The Taliban’s decision to respond publicly and positively to Kabul’s offer on June 9 was the result of a lock-step process. First came the concessionary climb-down by Kabul with a February offer for peace by President Ghani. This involved recognising the group as a political actor and legitimate political opposition; agreeing to a review of Afghanistan’s constitution; and removing Taliban commanders from the UN and other international sanctions lists. Next the Taliban’s initial reluctance to accept the offer had to be overcome.

A combination of backchannel mediation and sustained pressure from an invigorated air campaign this summer worked to recalibrate the calculus of the insurgency leadership. A coalition aircraft conducted 726 sorties in May, the highest since the Taliban’s summer offensive began. The targeting of Taliban revenue-generating infrastructure, including weapons caches and staging facilities, increased the insurgency’s opportunity costs of not making a political concession. A fatwa issued by clerics earlier in the week condemning militant violence further incentivised the Taliban to strike a conciliatory note when the ceasefire was extended.

The final strategic factor was a realignment of American, Chinese, Afghan and Pakistani objectives, with all four parties in tandem seeing an end to the stalemate as necessary to repair bilateral communication and advance the cause of peace. Significantly, sustained military and diplomatic outreach by Islamabad to the Afghan establishment this year coincided with a concerted move by the military high commands in Washington and Rawalpindi to salvage the Pak-US relationship. This could only be done by officially recognising Pakistan’s grievances vis-a-vis its national security concerns emanating from Afghanistan.

Pakistan’s own commitment to fencing the border simultaneously necessitated greater security pledges from Kabul. The upshot: political cooperation would have to be conditioned on a measure of trilateral reciprocity. Acting on the intelligence provided by Islamabad on the location of the TTP-JUA targets in Afghanistan, the American decision to target Fazlullah, a fugitive who had always been within US reach, went from choice to strategic imperative.

But Kabul’s failure to convince the Taliban to a ceasefire beyond the allotted 72 hours points to an unresolved sticking point: the Taliban desire to see the issue of foreign forces in Afghanistan elevated to the top of Kabul’s political agenda. Future negotiation will have to, at the minimum, provide assurances that international forces will definitively bow out, while simultaneously timetabling the seven guarantees offered to the Taliban under the Kabul Process framework.

On paper, the ceasefire demonstrated the sincerity of the two chief negotiating parties’ intent, helped deliver a brief domestic win for Ghani, and gave war-weary fighters a taste of what mainstreaming and an eventual peace might look like. Also important is Pakistan’s re-declared commitment to functioning as one of an increasing number of conduits between the Taliban and a Kabul government that, until this February, was publicly divided on the question of peace. This is an important CBM that should foster greater confidence in overcoming the Pak-Afghan strategic disconnect.

The short ceasefire offers two ways forward. The first is to think of it as a strategic end, which is less helpful because it is a shortcut, and neither side is quite there yet for viable peace to take hold. The Taliban have made clear that prioritising the issue of foreign forces is a precondition for any further negotiation. It is also unclear if Pakistan has the necessary political capital with the Taliban to convince them of the merits of a second consecutive ceasefire without a quid to match the insurgency’s quo. A second way to conceptualise the recent breakthrough is to consider this and future ceasefires as tactical stop-end devices that can incentivise direct Kabul-Taliban negotiation, therein conferring legitimacy onto Kabul as a negotiation party, which the Taliban has tried to resist.

This can also affect Taliban cohesion sufficiently to drive home the logic of a political settlement. Force is unlikely to deter the Taliban for two simple reasons: driven by devotion and an ideological casus belli that remains unchanged, the Taliban are unlikely to be responsive to ingenuous reinventions of the wheel without their chief grievance being addressed. But sustained interludes of peace, like those enjoyed over the Eid weekend, along with safe zones that offer free passage and the mingling of fighters and civilians can inculcate socialising norms that increase the rate of franctionalisation. From this perspective, the ceasefire, while short-lived, could provide a template for future negotiation predicated on a more substantive discussion on tabled grievances.
Finally for peace to break, collective action with Kabul taking the lead and building domestic capacity, and constituencies – including within its powerful Tajik factions – is the only real formula that is likely to work. The Ghani administration meanwhile must continue to ensure that the contours of a potential peace framework do not in any way compromise the hard-won gains made in the areas of women’s rights and their fundamental protections. A settlement that leaves either out, or excludes women from the room, won’t cut it. Finally, clarity on US strategic intent as well as the duration of its military footprint in Afghanistan is necessary to alter the Taliban’s calculus on the subject of peace.

The old ball and chain of burdening Pakistan with the expectation of delivering the Taliban has run its course. The burden of peace needs to be equitably shared. The challenge, now, will be to stay the course. And to avoid the curse of regional foot-drag.