How to Engage America After the Election 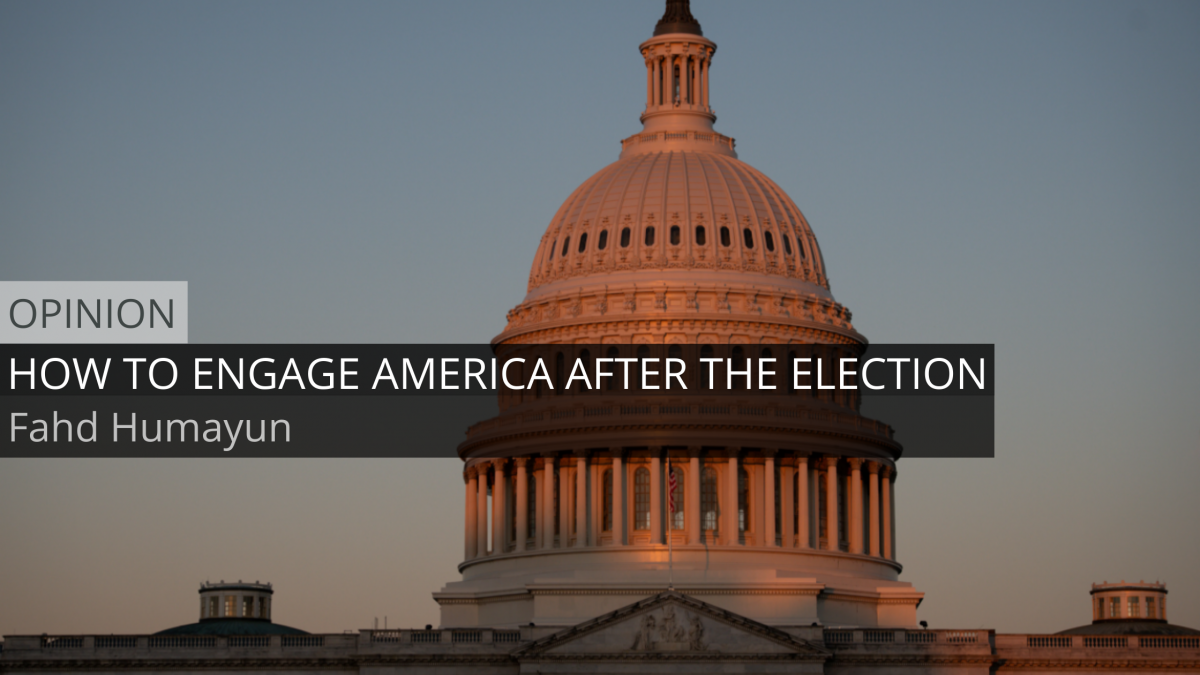 As the dust settles on a closely contested Presidential election in Washington, many Pakistanis are wondering what kind of engagement they can expect from a superpower in the throes of political transition.

History might serve as a useful guide. Since 2001, geopolitical constraints have limited the scope for renewal in the Pak-U.S. relationship, domestic turning points in the U.S. notwithstanding. As the curtain closes on perhaps the most bitterly fought U.S. election in recent memory, two such structural constraints stand out among the determinants behind the new administration’s engagement with Pakistan and South Asia over the next four years.

The first is tactical: the U.S. may well be exiting Afghanistan after 19 years, but a peaceful, stable and solvent country at peace with itself and its neighbors is not one of the legacies it is leaving behind. Pakistan is hugely apprehensive about the threat of an aborted peace plan hanging over the region. It is also cognizant of Washington’s vastly diminished appetite for a continued presence in the country, both as a means to getting the Taliban and the Kabul government to agree to a peace deal, and as a security end in itself. The risks to hard-won regional equity from an unfinished Afghan endgame will very likely be compounded by the tone the new administration chooses to take with Iran and China. Should the peace process next-door collapse, or Kabul find itself in a perpetual conflict trap, expect more mistrust between Afghan, American and Pakistani officials.

The next constraint is strategic. Washington’s pivot to Asia, now written into multiple national security documents, means that the containment of China will continue to color South Asia’s relevance to audiences on and around Capitol Hill. Ergo, a new administration will continue past practice of viewing South Asia as a surrogate theater in the emerging Sino-U.S. Cold War. Pompeo’s visit to a gamut of littoral states stretching from India to Vietnam and announcement of a U.S. embassy in the Maldives, a week before the election, signals the strategic continuity observers can expect on this front.

Where does this leave Pakistan? This is a tough question. Despite a history of ups and downs, the U.S. today is Pakistan’s biggest trading partner. Pakistan also now needs the IMF loan program to resume to deliver stability to Pakistan’s external account.

But while Prime Minister Imran Khan and President Trump struck a convivial if not necessarily unlikely acquaintanceship in the former’s first visit to the White House, the constraints cited earlier need to be surmounted. And should a Biden administration bring back technical specialists to rehabilitate US foreign policy as is widely expected, there will likely be greater nuance in how America reads Pakistan.

This means that executive spontaneity or bonhomie will continue to be counterbalanced by a less-than- anguine U.S. bureaucracy predisposed to viewing Pakistan in transactional and utilitarian terms. This, together with the lack of substantive content in the Pak-U.S. relationship these past four years, may discourage recipients in Islamabad from expecting a major departure during the next four.

This pessimism is not entirely unjustified; diplomats in both countries have worked hard to unlearn their pathological tendency to blame and shame the other since the ill fated events of 2011; but America’s ambivalence to the Kashmir dispute and its geostrategic alignment with New Delhi still signals to Islamabad U.S. self interest and the primacy the latter places on hard realpolitik. President Trump may have offered to mediate the Kashmir dispute, but in the long run America’s retreat from multilateralism only dilutes the global currency afforded to international problem solving. This is a predicament for Islamabad whose compass on Kashmir derives from rules-based legality and UNSC resolutions. Finally in moments of crisis in South Asia, decision makers in Islamabad worry that U.S. will condition its own behavior on the utility it gets from building India up as a longer-term strategic counterweight to China.

But despite these limitations, the aftermath of the U.S. election offers Pakistani policymakers at least four opportunities that they should cash in on.

First, the PTI-led government should reach out to congratulate the new administration and signal at the earliest the mutual imperative of staying the course on Afghanistan. Islamabad has been committed to ensuring political stability in Afghanistan, but absent U.S. support and cooperation lies a real danger that the peace process and the fragile gains of the past decade, including on women’s rights, will buckle under the weight of contingencies and stakeholder fatigue. This is not something that any Pakistani wishes to see, even if an Afghan reconciliation that brings the Taliban to the table happens to be viewed sub optimally elsewhere in South Asia.

Two: while the U.S. has long-sought to cast its convergence with India on the basis of shared democratic values, these values are fraying as a result of authoritarian tendencies on both sides. American voters may have turned out in large numbers to elect the next President, but the closeness of the result belies any real moral victory for liberalism. But abroad, for several reasons, U.S. foreign policy still has a strong imperative to be seen, at least, as a vanguard of democratic ideals and liberal values. And governments around the world that commit to journalistic freedoms, human rights and environmental protections may find their conversations with the next U.S. administration as having greater bandwidth. On democratic consolidation, pluralism, and media freedoms, Pakistan’s present leadership’s record is admittedly bleak. But should Islamabad recommit to these principles, Congressional lawmakers will find it difficult to ignore the potential for a stronger partnership. Needless to say, this in turn can strengthen Islamabad’s international position on Kashmir, where voices across the aisle in the U.S. note in private, if not yet in public, New Delhi’s bulldozing of individual freedoms and constitutional guarantees.

Three: because relationships rarely survive on the endorphins of feel-good photo-ops alone, Pakistan should purposefully press ahead on the Strategic Dialogue that expanded the Pak-U.S. relationship beyond strategic issues. This will service an agenda concomitant with economic stability in Pakistan, which in the face of new geopolitical pressures is really the only bankable denominator that can help critical relationships evolve beyond a language of expediency. Pakistan needs to cash in on the fact that there are fewer strategic gaps in the Pak-US relationship than there were a decade ago. This stability in turn should give way to a serious conversation about fostering economic growth, and how Pakistan’s young, democratically minded 220 million-strong market could become a key node of bilateral convergence, especially for U.S. businesses and companies looking to invest in the country.

Four: discreetly, Pakistan needs to explain to Washington why attempts to forcibly overlay Indo-Pacific binaries onto South Asia (or neutralize Pakistan’s strategic partnership with China) are in fact inimical to America’s long-term interests. Even as the U.S. arms India with the latest weapons and technologies, the China-Pakistan relationship is in contrast geared at shoring up economic and energy connectivity that could benefit the entire region, including Afghanistan whose solvency presents the West with a compelling reason to ease up on anti-CPEC propaganda. Furthermore, even rational voices in India (or what’s left of them) recognize today that despite the BJP’s political bluster, New Delhi cannot afford to be hemmed into an open-ended military tussle with China. This is reason enough for the U.S. to not force Pakistan into making a choice between strategic camps; this in turn can provide Pakistan the space to signal to the U.S. the unhelpfulness of India’s politicization of the Financial Action Task Force, and objections by the United States to the terms of Pakistan’s relationship with China.

The Pak-U.S. relationship has rarely been an easy ride, even at the best of times. And a deeply polarizing election in Washington is hardly the most opportune window for a comprehensive reset. As both countries navigate the uncertainties of a post-pandemic future, we should anticipate the baseline relationship to be punctuated by structural irritants. But this anticipation should also breed creativity; Islamabad can and ought to demonstrate some deftness in how it chooses to approach the new administration. This should start with informal and formal invitations to the administration and its teams to visit Islamabad, while folks behind the scenes get to work.

The writer is a PhD candidate at Yale. Twitter: @fahdhumayun