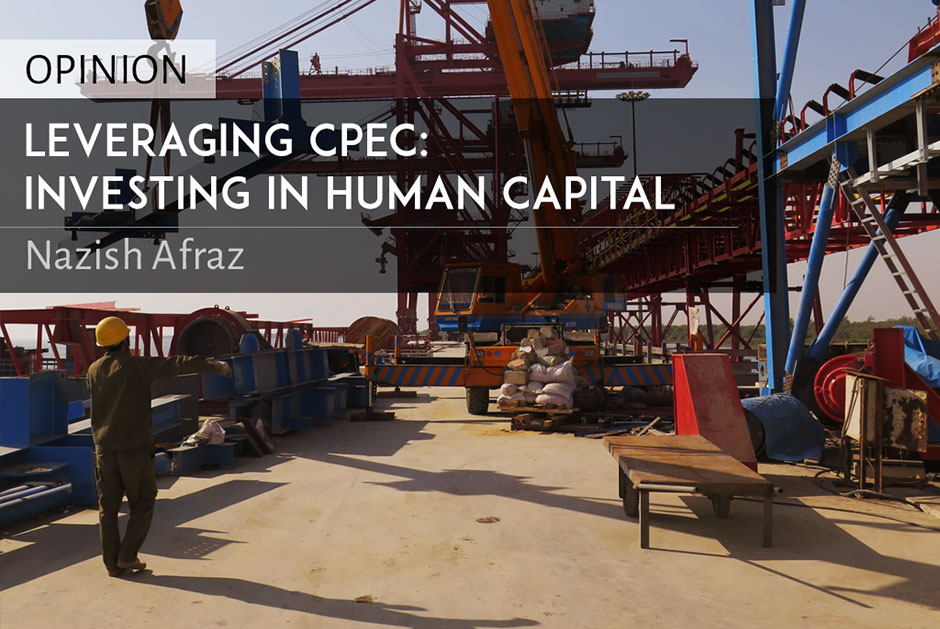 As Pakistan navigates a burgeoning deficit crisis, there is renewed focus on leveraging CPEC for growth. With government-to-government CPEC infrastructure upgrades well underway, all sights are set on business cooperation with its complement of potential joint ventures and private foreign direct investment. For Pakistan, such investments are valuable for their spillover impact on local firms and labour: transferring technology, boosting skills, and improving the quality and quantity of employment.

These gains, though, are by no means guaranteed as part of the larger CPEC project. Infrastructure is just one of the several interconnected gears that drive private investment in an economy. A second gear that must be engaged to leverage CPEC investments is productive labour. The availability of productive, skilled, and reasonably priced labour is an important determinant of the location decision for foreign investment.

Crucially, the quality of labour is not just a determinant in the magnitude of investment received but also of the extent to which benefits of new investments can be transferred to the local population. A literate population with good basic skills is more resilient, able to acquire new skills more quickly, and able to take up new types of jobs as some sectors decline and others rise. For Pakistan’s demographic structure, with a burgeoning young labour force, the opportunity to generate high-value jobs from CPEC investments is not one that we can afford to miss.

Yet Pakistan’s labour force suffers from years of underinvestment. The World Bank’s Human Capital Report ranks Pakistan 134th out of 157 countries, the worst performing South Asian country, with a score that is closer to the average for lower income countries than the average for our own group of lower middle income countries. According to the report, a child born in Pakistan today will, on average, reach just 39 percent of her productive potential due to deficiencies in health and education.

Add to this Pakistan’s severe underinvestment in skills. Demand oriented labour training is hard to come by, with government institutions adding negligible value to the employability of their trainees. While private firms invest considerable time and resources in training their own labour, retention issues and lack of enforcement of contracts mean that they are not guaranteed the benefits of using the labour they have trained. This acts as a disincentive for investing in training and skill development, increasing the costs of using local labour and leads to lower than optimal private sector training.

The longer-term solution requires deep reforms in education, health, skills and contract enforcement. Yet opportunities from CPEC and Pakistan’s unemployed youth are knocking on the door right. In addition to undertaking reforms with longer-term payoffs, there is an urgent need to kick-start the labour productivity-investment virtuous cycle right away. One short-term solution being proffered is to mandate the employment of some proportion of Pakistani labour. This is dangerous territory and risks becoming counter-productive. In the context of low availability of educated and skilled personnel, this raises the costs to businesses and makes Pakistan a less attractive FDI destination. Private businesses are under no obligation to invest, and can very simply take their business elsewhere.

A more sustainable approach to this predicament is to help firms that train and use local labour. There are several tools for this. Firstly, part-funding the training cost incurred by private businesses is a simple model than has been tried and tested in Punjab, and is ready for scale-up. Potential employers design the training, arrange the instructors and pay part of the costs. Punjab Skills Development Fund picks up the other part of the cost.

Secondly, tax incentives can be conditioned on training labour. Investors are currently offered blanket ten-year tax holidays in Special Economic Zones (SEZs). The same incentive can be made performance based, conditional on investing in skilling local labour. Alternatively, tax breaks can be conditioned on sourcing components from local firms, which also translates, albeit more indirectly, into local employment gains. Outside of the SEZs, labour training expenses should be tax deductible, reducing tax liability for firms that train labour, and helping offset the private cost of training. In a bizarre and rather sharp contrast to this, the current services sales tax regime actually imposes a tax on business trainings, thereby increasing the costs of private training.

Measures such as conditional tax holidays, tax deductible allowances and part-funding training grants that leave the details of the training to the employers, and intervene only to reduce costs are based firmly on harnessing market incentives. They directly address the market failure that plagues the labour market: net social benefits to training labour are higher than the net private benefits to firms. By compensating firms that invest in labour, the government plugs in the gap between private and social benefits. Moreover, it ensures that the training is actually in demand, as it is determined by the employing firm itself – a far better use of funds than pouring money into government institutions that churn out trainees whose skills might exist on paper, but have no credibility with employers.

This simple toolkit can kick start the process of improving the productivity, suitability and cost of local labour, which in turn helps secure greater private investment, and ensures a place for Pakistan’s people in it.