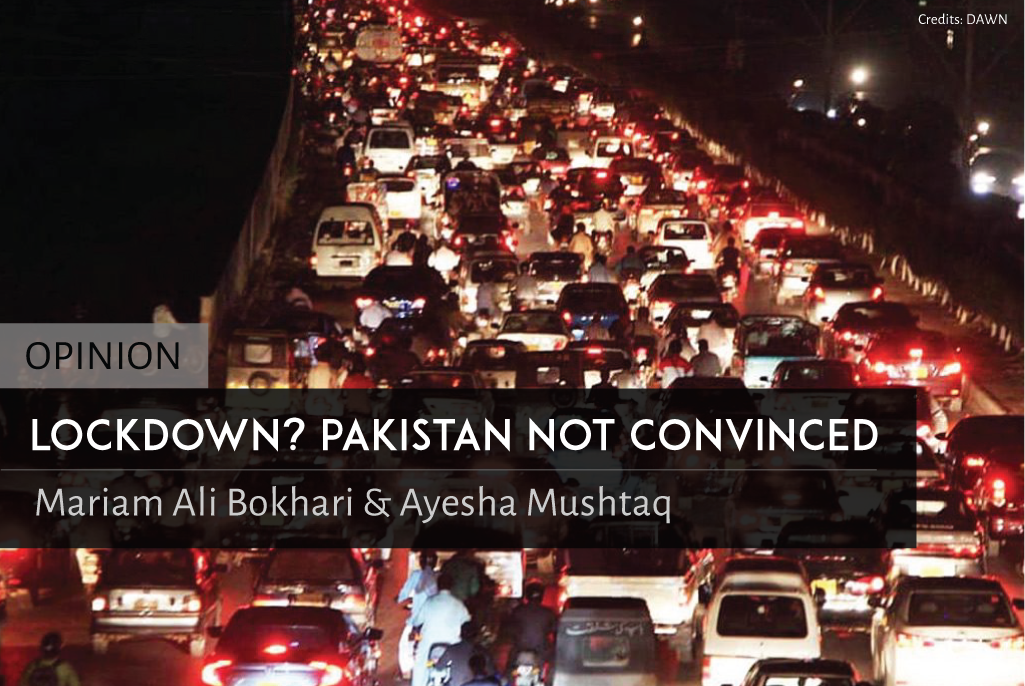 When a global pandemic burns through a country it first tests both its leadership as well as its national public resolve. In Pakistan much more is being tested, including the limits of the healthcare system across the federation, and the state ability to mobilise responses and shape civic engagement.

First things first. The one crucial measure that arrests the spread of Coronavirus is social distancing. Of this we are daily reminded by social media updates received from countries that learnt this too late, after mounting death tolls and widespread economic collapse. Lockdown to save lives is the message broadcast from hospital wards abroad, quarantine zones, and even our own public advisories. With 700 confirmed cases of COVID-19 in Pakistan in a matter of days, and very likely thousands more on the way, it is certain that Pakistan will face its greatest challenge yet. But the crisis does not end with scaled up healthcare and lifesaving equipment; there is a simultaneous tide of resistance to public order that governments must contend with.

From its earliest outbreak in China in late December 2019, and thereafter to the rest of the world, the Coronavirus pandemic has panned out in full public knowledge through social media, down to its latest developments today in each city across Pakistan. Television channels have been dedicating most of their programming to discussion and updates on the disease; and it is without question an unprecedented emergency causing greater loss and disruption than any other global crisis. Except that this information has left a cross section of Pakistani citizens unmoved, who perceive this analysis to be exaggerated and misleading. Public places like markets and restaurants in Pakistan are experiencing an unceasing footfall, even as the Prime Minister made a televised appeal to the nation to stay home and prevent transmission of the disease. This is not untypical of public reactions elsewhere: in Italy as well as Iran, where the death tolls are highest todate, the public did not heed advisories meant to save hundreds of precious lives.

Both federal and provincial governments’ repeated directives to undertake isolation and social distancing have come to no avail. The closure of public spaces and cancellation of large public gatherings, and in some cases stricter measures like raids at wedding halls, were correctly aimed at prevention of the virus on a large scale, but given the exponential spread of the disease a lockdown must be brought about rightaway. Earlier with just a 100 cases confirmed, the government announced an indefinite closure of all public and privates schools, colleges, and universities across the country. Public congregations were cancelled through the imposition of Section 144. With rapidly increasing cases and thousands of untested carriers, nothing short of a lockdown will save the world’s fifth most populous country from collapse.

Of course leadership makes all the difference. Sindh has demonstrated far more adaptive capacity to control and quarantine the disease, given that the province has the highest number of confirmed cases, and earned the WHO’s praise for proactively containing its spread. The federal government on the other hand, has moved much slower in its response, and continues to fumble over prevention and containment mechanisms across Punjab, the most populous province. A crucial month since the pandemic arrived, there is no comprehensive information regime, nor a communications strategy that guides citizens on what to expect.

But citizens disregard public service announcements even during the best of times. With the stakes for survival at an all time high, what can explain this resistance to public order? A large cohort of citizens is unwilling to believe that the pandemic is as deadly as the doctors, media, and governments worldwide are claiming it to be; that an international conspiracy has been launched to subvert the nation by spreading a malicious virus. Multiple Facebook pages are curating content to this effect, freely circulating on Whatsapp to colloquial readerships that accept fake news. Much of this content offers specialized Islamic prescriptions for disease, and suggests traditional medicine and faith healing alternatives. This group is significant both in voice and number, as evident from the proliferation of their webpages, as well as the multitudes that subscribe to and endorse this worldview. None of this comes as a surprise in Pakistan where traditional skepticism of governments, alongwith deeply held convictions against modernity have had a long history. A time of crisis further impairs good judgement, and people collectively indulge a confirmation bias that endorses their own beliefs while rejecting any information contradicting it.

There are also those openly defying the ban knowing full well the risks associated with public congregation. This includes citizens insisting on holding wedding receptions, mosques performing Friday jamaat, private schools refusing to shut down, putting employees at risk of contracting and transmitting Coronavirus. Punitive action by police has forced some to close down, but the resistance to public order is part and parcel of a poor attitude towards political obligation, or the moral duty to obey directives issued in public interest. This attitude values self-interest above the safety and security of others, and will become more evident as the cordon extends into days and weeks. It also makes clear how far we can go with collective action in Pakistan.

Crises like this pandemic often lay bare our worst inclinations, as well as provide an opportunity to reorder social priorities and respond to socio-economic groups experiencing the outbreak of Coronavirus differently. The fundamental problem with lockdowns is that social distancing is not an option for vulnerable groups, like daily wage earners forced to find work in partially shut down markets. Pakistan’s informal employment is as high as 70 percent, and poverty levels among informal workers are twice as high compared to formal labour. Not all informal workers are daily wage earners, but face similar uncertainties should they be let off during the pandemic. In context, the national poverty line will stand at an estimated 40% this summer, compounding vulnerabilities for those furthest removed from state benefits, including women and other marginalized groups. The pandemic will take away their livelihoods, as well as their bread earners who cannot reduce their exposure to the virus. As repeatedly warned by international agencies, COVID-19 must be contained among these vulnerable groups who have no recourse to healthcare other than overburdened and poorly managed public hospitals. Numerous online collectives have emerged to pool monetary support and food rations for those in need, in addition to mobilizing funds for medical equipment for healthcare facilities across the country, but more coordinated executive action must respond to this at federal and provincial levels.

All crises necessitate collective responsibility. Those of us with resources, information and mobilizing capacity can help make a larger difference. The gap between those unwilling to prevent the pandemic and those who are defenceless against it must be overcome by civic influencing and stricter governmental control. A robust federal information regime must come in place – going beyond individual spokespersons addressing a press conference or talk show – and provide uniform instruction on disaster preparedness and the impending fallout of the pandemic, now turning into a death toll. The whole gamut of preventive measures must be communicated daily, alongwith a modicum of scientific reasoning to convince citizens why and how these measures will be useful. A lockdown is the only option at hand now, even though there are naysayers warning against an economic meltdown. Saving lives has to take precedence over saving the economy. Yes, altering political convictions and social behaviour in the face of any disaster is difficult, but will we allow corporate interests and the public’s recklessness overwhelm our survival?