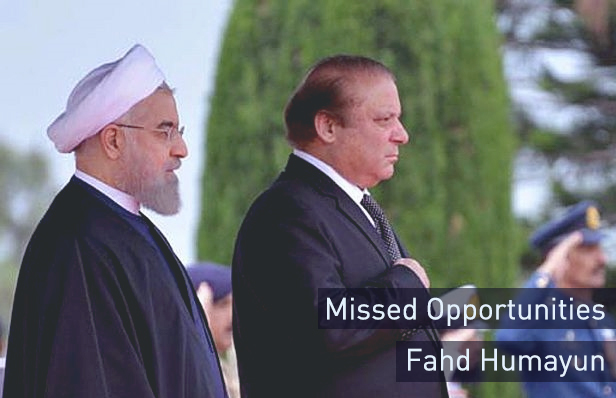 As Tehran shakes off the morning-after effects of its international comeback, regional powers are lining up to cash in on the new Iranian moment, taking advantage of credit lines and reaching for investment opportunities. With Indian Prime Minister Narendra Modi in Tehran this week, Chabahar’s do-over as an Indian gateway into West Asia tick-marks another box on a long list of strategic transformations. China and Iran have already pledged to boost bilateral trade to a staggering $600 billion over the next decade. Russia’s North-South Transportation Corridor is poised to rubberstamp a new wave of multi-modal interdependencies linking the Iranian port of Bandar Abbas to Central and South East Asia.

None of these initiatives touch Pakistan, despite Pakistan and Iran sharing an established border that neither side contests, a deep history, and cultural spillover. Pakistan’s outreach to Tehran since 2013, if anything, remains caught in foreign policy limbo, with the ruling PML-N either oblivious or indifferent to the big Iranian renaissance unfolding next door. February’s landslide victory for President Hassan Rouhani’s allies, in the first parliamentary vote since Iran signed a nuclear deal with world powers, has shored up the Iranian center’s reformist mandate and Rouhani’s domestic clout. This means that Tehran is comfortably placed to make bolder overtures, cherry-pick longer-term partnerships, and invest in deeper geopolitical engagement.

So far Pakistan’s failure to articulate any meaningful policy response means that it is losing out in a big way to the opportunities presented by Iran’s new glasnost. The first was President Rouhani’s presidential victory in 2013, and the charm offensive launched by Iranian Foreign Minister Javed Zarif immediately after. The second was the signing of the Joint Comprehensive Plan of Action (JCPOA) and subsequent lifting of sanctions in 2015, which other regional powers were quick to dive in on. The third and most recent opportunity was President Rouhani’s trip to Islamabad this March with a delegation of 60 businessmen in tow. In terms of signaling Tehran’s intention to do business, the message was as clear as it gets. But Pakistan’s failure to do its homework, or brainstorm the contours of any coherent policy on Iran, meant that the big-ticket symbols of bilateral promise ended up lost in translation: border security, counterterror cooperation, and the Iran-Pakistan gas pipeline that for all practical purposes has been bumped down in Islamabad from a potentially game-changer pipeline to hollow pipedream.

The trouble is that, against a backdrop of diminishing Arab state power, underrating Tehran’s potential as a capital of importance will cost Pakistan in the long-term. Iran was the first country to recognize Pakistan as an independent state. There was a time when Pakistan Day was celebrated in the streets of Tehran. During the 1965 war with India, Pakistani aircraft used Iranian facilities, while large groups of Iranian youth gathered outside the Pakistani Embassy in Tehran to express their solidarity. Iran’s continued support on the Kashmir issue also makes it a player of potential consequence when it comes to negotiating the India-Pakistan stalemate.

But the historical overlay of a revolution and multiple regional conflicts since means that the Pak-Iran relationship today is a far cry from the bonhomie of its Cold War past. This spring Iran announced its intention to stage ground forces training exercises near its 900-kilometer long border with Pakistan. The aim of the exercise, to test the Revolutionary Guard’s latest hardware, signals new Iranian force posturing in the Sistan-Balochistan belt, and a new fault line in an already unstable region. A growing trust deficit at the bilateral level, as evidenced by the PR fiasco over discussions of Kulbhushan Yadav’s arrest from Balochistan with President Rouhani, together with the genesis of predatory splinter cells including Jaish-ul-Adl in the Pak-Iran borderland, has exposed new tensions in the bilateral dynamic.

This is a shame, given the potential dividends of a functioning Pak-Iran relationship. In Afghanistan, both Pakistan and Iran have a clear interest in a stable endgame, and Iran’s influence over Taliban commanders in the south could be leveraged to help reduce violence levels. Iran’s closeness to China (Beijing is Iran’s biggest trading partner) can also be harnessed to create trans-arterial bridges with the China-Pakistan Economic Corridor. In turn CPEC can guarantee Iran much-needed eastward access. With an invitation to Iran to join the SCO, Pakistan and Iran will also find their paths crossing more frequently on issues of cross-border drug trafficking, counterterrorism and regional security.

Then there’s the economic angle. Iranian imports, hydrocarbon and otherwise, remain relatively cheap because of geographical proximity, as well as an extended credit line Tehran can offer. But the 780-kilometer Iran-Pakistan gas pipeline on the Pakistani side of the border, once the motherlode of Pak-Iran conviviality, looks to have been relegated to Islamabad’s policy scrap pile even as President Rouhani maintains that his country can be in a position to start pumping gas into Pakistan in just a few months. But in Islamabad there simply seem to be no takers for constructing the remaining length of the pipeline from the Iranian border to Gwadar, and from thereon to Nawabshah as per the pre-2013 plan, under the PPP-led government.

The absence of Pak-Iran banking channels has also prevented trade from taking off, although it has not managed to rollback smuggling and third-country transactions. Formal and informal trade hover at a meager $1 billion and $2 billion respectively, even though Iran and Pakistan make up an enormous market with a population touching almost 300 million. India and Iran by comparison enjoy an annual bilateral trade of about $14 billion. There are other obvious import-export complementarities for Pakistan to find and leverage in wheat, crude oil, refined oil and natural gas. As an add-on, Iran happens to be the world’s top importer of basmati rice.

In recent years Iran has also made significant advances in military hardware production and cyber security. Although Iran’s record on human rights including fundamental freedoms for women remains dismal, its new ‘democratic surge’ means that the Iranian polity has a greater number of potential entry-points to cash in on, in terms of building Pakistan-friendly constituencies in Tehran. This is important. Even if Iran’s rise is intended to be peaceful, its power projections will still end up challenging South Asia’s multipolarities. Given that two out of Pakistan’s four borders are contested, any fanning of a proxy conflict along Pakistan’s southern flank will indelibly result in hard-talk with Iran, as was the case in 2014 when Pakistani forces returned mortar fire after Iranian security forces crossed the border in pursuit of militants. The danger here is that the Revolutionary Guard’s propensity to resort to escalatory tactics, together with Indian involvement in Zahedan, could end up undermining regional stability.

Given the missed opportunities of the last year-and-a-half, it is now for Islamabad to initiate conversations with Tehran, and lay the groundwork for a durable entente. Iranian foreign policy is at present undergoing its biggest transformation since the fall of the Shah. Pakistan’s foreign policy, for its part, is increasingly dynamic, and less tethered to the geopolitical balancing compulsions of the past decade. That said, Islamabad’s response to Iran’s re-entry into the world’s political and trading systems has been lackluster and unimaginative, characterized by a diplomatic inertia that continues to hold the relationship back while the region races ahead. This will have to change.