Parliament and the Pandemic 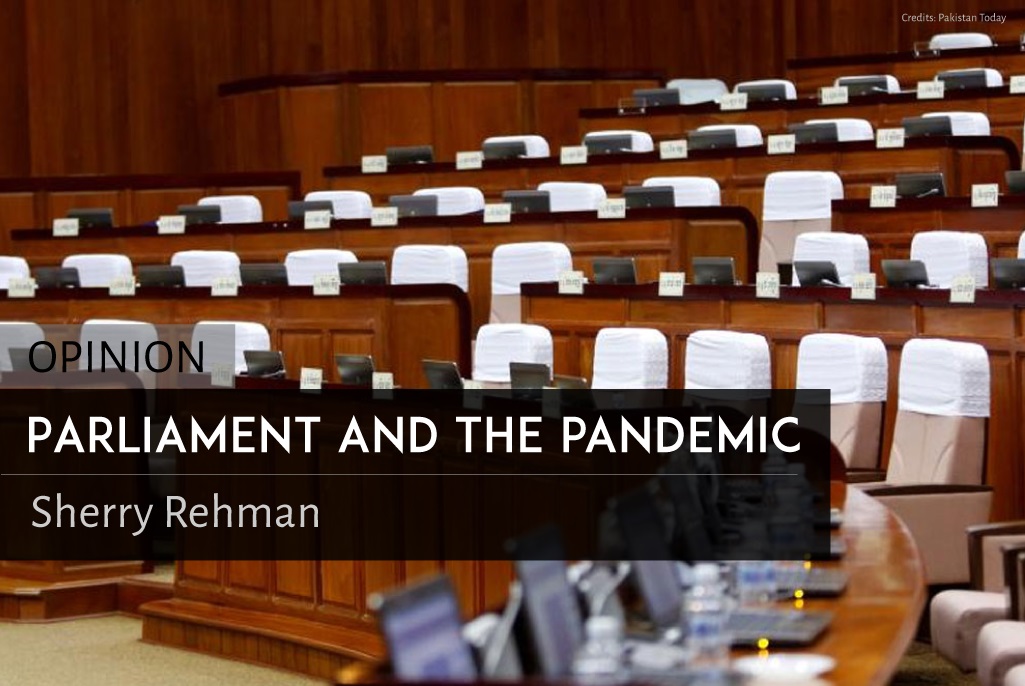 As global coronavirus cases passed the million mark on Thursday, the world struggles to cope with containment and mitigation without any roadmaps for such a pandemic. With the situation in Pakistan still at a stage where the virus is spreading without knowledge or capacity to test, isolate, treat, the necessity of harsh lockdowns confronts every sector of the economy and every aspect of human life, so dependent on social activity for work, prayer, communities and the business of government. Life in the times of corona, as we see it, has altered how societies work, and will continue to re-shape how the workplace as well as human activity can adapt to the possibility of its recurrence while we re-assess national priorities. Even as we speak, urgent choices at all levels have to be made with limited resources.

As part of the first-step lockdown and air travel bans, Pakistan’s parliament, both the upper and lower Houses, are in forced recess, understandably missing their scheduled calendar dates for sessions. Yet as policy decisions unfold from Islamabad as well as provincial capitals, the need for parliaments to exercise oversight on emergency measures, fiscal re-prioritisation, revenue disbursements, social transfers to the immediately vulnerable, and health as well as other priorities, re-emerges as essential. In the search for solutions, the one advantage that global connectivity can leverage right now are internet and tech-based communications for virtual conferencing. For this, Pakistan’s parliament has taken some tentative measures to resume skeletal committee sessions, while observing social-distancing mandates.

So far, one specially notified committee of parliamentary leaders from both the Senate and the National Assembly has met to discuss the corona crisis, and shape shared responses, but the meeting was marred by the PM making his own virtual intervention and then quitting the meeting without listening to any of the political leadership present. It was a wasted opportunity to not only create political capital for the government itself, but to build a platform of unified national responses given the unprecedented nature of the threat. All opposition parties had clearly indicated their willingness to let partisan politics take second place to protecting the people of Pakistan from the pandemic, but the PM decided he had better things to do, unfortunately. Bilawal Bhutto Zardari had even stoically refused to criticise the PM in a press conference convened to create leadership messaging on the need for social distancing and Sindh’s measures in coping with the emergent risks. This must change if all provinces and the federal government are to work in lockstep with another, which is essential. The coronavirus emergency is a national challenge and must be treated as such.

Although Pakistan’s parliament has not been a big innovator, both Speaker Asad Qaiser and Chairman Sanjrani are quite open to ideas at this point. Despite not having the initial capacity to host web meetings, they have gone further than Pakistan’s neighbours in instituting special committees and creating common ground in crisis. So far, in the SAARC region, only Pakistan, Bhutan and the Maldives are taking the lead in convening online meetings. If the pandemic continues to rage through South Asia, with low health infrastructure and high poverty indices, a round of essential committee meetings such as Health, Finance, Planning, IT, Interior, Law and others must be convened online to plan for contingent futures. Parliament’s urgent role of scrutinising government, authorising spending, making laws, and providing leadership during difficult times cannot be pushed aside. MNAs, MPAs, senators are swamped for distress relief provision, health assistance and other queries from an anxious public, which also suggests that physical sittings in some remote future cannot be the only way out. The provinces too may need to follow suit.

What can be done to plan ahead? Parliament should urgently ramp up its e-tech capacity by seeking changes in its internal budget. All members of the budget committees can be mobilised on the web, and there is little likelihood of any party objecting to diverting resources for urgent staff training and higher internet coverage. At the same time, resources and fresh protocols for protecting parliament’s staff will have to be created. Senate staff runs at 1,115 people, while 2,200 NA staff including CDA officials are posted during sessions. They are extremely vulnerable to infection in cramped quarters due to low office space in parliament building, so telework facilities must be organised for them. According to the International Parliamentary Union, this is the path the EU is taking. For essential committees like the Coronavirus Monitoring Committee that will meet part virtually, part physically, on 6th April, transparency can be ensured by the live broadcast infrastructure which is already in place, easily tweaked by PTV.

For legislation, rules will have to be made to allow online voting, which parliaments are testing. To facilitate this in Pakistan, a joint rules committee meeting of both Houses can be called online immediately. The European Parliament has trial-run email voting already, while in Spain, which has been hit hard by crisis, a remote voting infrastructure has been set up even before the pandemic to ensure participation to reduce legislators’ travel load. The UK, on which Pakistan and India’s Westminster system of government is modelled, has just decided to institute virtual parliament by the end of the month after a strong intervention by Speaker Hoyle in the wake of the opposition’s demands for scrutiny of the government’s response to COVID-19. Security issues for remote voting, to ensure votes are cast legitimately with identification, can easily be overcome through biometric applications or device-registration. The Brazilian parliament is asking for a device to be registered with MPs, for instance, with an internal application for voting. Pakistan’s parliament will have to invest in a system that can carry the bandwidth in times when web services are under sudden load, and also ensure that each member of parliament is able to function from an environment where the internet connection is fast and reliable.

For democracy to be meaningful, its institutions must adapt to the future and to public needs in real time. Pakistan’s economy is on ventilator, and little coordination is visible from Islamabad. Our informal sector and daily wagers are in urgent need of social protection, while health professionals are in desperate need of equipment. Parliaments must seek answers on economic transparency and aid inflows while ensuring the delivery of government benefits with both care and compassion. For web hosting large numbers, many Parliaments are turning to commercial providers offering cloud-based solutions such as Office 365, including UK, Netherlands Senate, the Danish Folkinget, and Norway’s Stortinget. Bhutan is using G-Suite from Google Cloud, while Zoom was used by Pakistan’s parliament.

There is much work to be done in the days ahead. Nothing is certain anymore, and the changed world will require new ways of working, travelling, and the questioning of orthodoxies, both economic and otherwise. Parliaments all over the world cannot be exempt from exploring urgent innovations to conduct crucial business. Our task as representatives has become even more acute in times of crisis and legislators must continue to be answerable and available to the public.