Timeline of US Taliban Talks 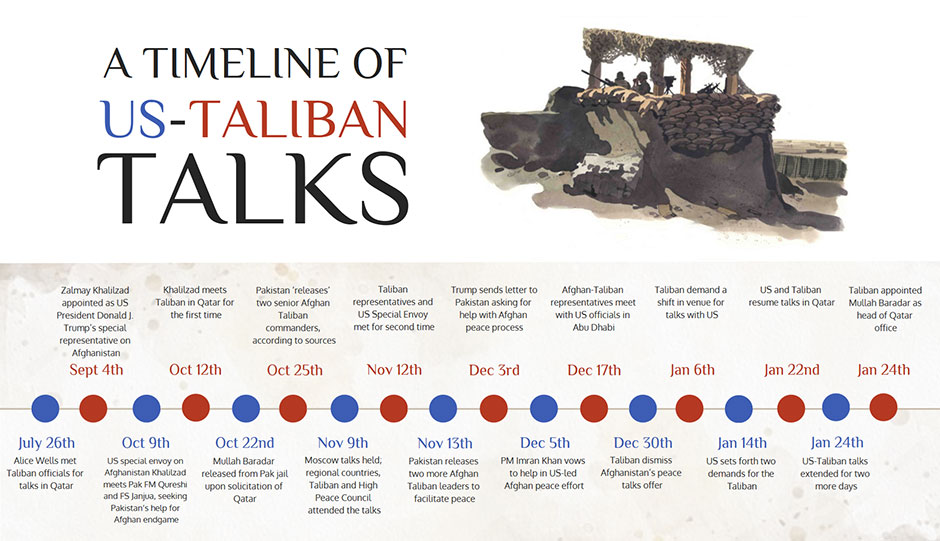 With discussions around Afghan reconciliation entering a critical phase, it’s worth looking at what is happening in Qatar and beyond. This short piece analyzes the push for a settlement and question whether reconciliation between the US and the Taliban would equal lasting peace in Afghanistan.

What is the Latest?

The US-Taliban talks in Qatar have now entered the fourth day raising hopes of progress towards ending the 17 year war. Sources suggest that the Taliban have agreed in principle to renounce support for Al-Qaeda and resist Daesh in Afghanistan, ensuring that the country will not be a future staging ground for attacks against the US and its western allies. While this is being sold as a huge win for the US, the Taliban’s willingness to forego contact with pan-Islamist groups is not new. Other central issues on the table include a timeline for a ceasefire, drawdown of US troops, and the Taliban’s willingness to engage in an intra-Afghan dialogue with the Kabul government.

What are the Challenges?

Over the last 6 months, the Taliban have staged several high profile attacks within Afghanistan under a fight-talk-fight strategy. The most recent attack on an NDS training facility in Wardak resulted in over 100 deaths. The ANSF response to the Taliban challenge has been muted, with focus on aerial operations, and has strengthened the Taliban’s position in talks. On-ground developments have been precipitated by a Washington administration keen to exit from Afghanistan. President Trump’s signal of premature withdrawal of up to 7000 troops from America’s longest war has also had an impact on the peace talks. The challenge now lies in finding a middle ground between the US and the Taliban on two issues; the first is the presence of US forces in some, albeit limited capacity for anti-terror operations, and the second is facilitating a successful dialogue between the Taliban, the Kabul government, and other Afghan stakeholders. These two issues have eluded agreement with the Taliban reiterating their position that the US remains an occupying force and that any discussions with other political stakeholders in Afghanistan would proceed the finalization of US withdrawal of forces from Afghanistan.

In Kabul, the talks have taken a back-step as political jockeying for the upcoming Presidential polls has meant various ethnic combinations have come together to field joint tickets for the posts of President and Vice President. This, despite the uncertainty surrounding the elections as Kabul abounds with rumors of a US brokered post-reconciliation interim government. The disunity of the National Unity government has been compounded with the firing of Abdullah Abdullah’s deputy and vice presidential candidate Mohaqiq, and a complete re-hauling of security leadership with resignations on top security posts. This has meant that hardliners such as Amrullah Saleh and Assadullah Khalid have made a comeback in the Ghani administration, complicating the search for middle ground in any future intra-Afghan dialogue. Disturbingly, leading political parties in Afghanistan have bypassed the Kabul government by announcing separate teams for dialogue with the Taliban. Further complicating the terrain in Kabul is the tangential of the High Peace Council which has shown its willingness to bypass Ghani by sending a delegation to Moscow.

What’s not on the Radar?

While progress in the talks between the US and the Taliban seem to have progressed well beyond initial forays, several challenges remain, with crucial issues still off the radar of reconciliation. As of today, there has been scant discussion on what peace would look like. Will the Taliban accept the Constitution as it stands or will they demand a revision? What constitutional changes would the Taliban demand and which ones could be conceded on by political stakeholders in Kabul? Progress on women’s rights, education and the protection of minorities will also remain a key sticking point. While the Taliban have shown more willingness to engage in discussions with women leaders in unofficial Track-II meetings under Pugwash and other similar initiatives, their official policy remains unclear. The reaction of Afghanistan’s powerful warlords, that represent the interests of various ethnic groups, also remains an unknown. The anti-Taliban rallies and protests in Kabul and other cities after the Eid ceasefire last year point to a relatively small yet coherent anti-Taliban lobby in Afghanistan that might see any future reconciliation with the Taliban as a direct threat to their long-term political survival. Finding answers to these questions remains difficult but may well determine whether a US-Taliban reconciliation will lead to a lasting Afghan peace or stoke fears of a return to new civil strife.