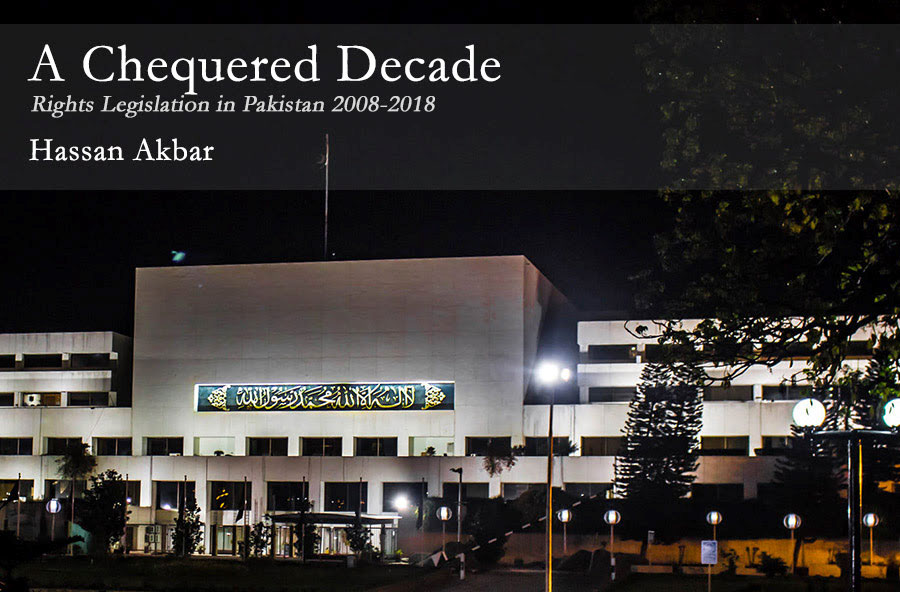 A Chequered Decade
The fight for fundamental rights in Pakistan is not a new one. Despite a chequered history of political repression under periods of military rule, a vibrant and resilient community of activists, journalists and progressive political leadership has championed a dedicated struggle for rights. This has culminated in legislative reform. Since 2008, over 16 constitutional amendments and bills passed by parliament have attempted to course correct some of our failings in extending constitutional rights to our citizens.

The most significant legislative reform during the last two decades of democratic rule has been the 18th Amendment, which devolved a number of subjects in the concurrent list to the provinces, restoring the federal nature of Pakistan and allowing provincial governments to legislate and govern on subjects such as women’s rights, labour laws, health and education.

Equally significantly, the establishment and strengthening of the National Commission on Status of Women 2012, the National Commission of Human Rights 2012, and National Commission on the Rights of Child 2017, have been instrumental in creating institutional structures for protecting and promoting fundamental rights. Amendments in Pakistan Penal Code and Criminal Procedure Code on the criminalization of forced marriages under Wani, Badl-e-Suletc and the mutilation or disfiguration using acid or other corrosive substances have been welcomed. The Harassment of Women at the Workplace Act has addressed a long standing demand for the protection of vulnerable women in society. Similarly, provincial legislation such as the domestic violence bill have pushed the envelope on rights despite backlash from right-wing groups.

The Hindu Marriage Act, which now recognizes Hindu marriages, has been the culmination of a long awaited demand of the community for the recognition of their marriage rights. However, the delay in legislation on the National Commission on Minority Rights, despite the tabling of a bill in 2015, is worrisome and poses a serious challenge to the government’s ability to develop an institutional mechanism for the protection of minority rights in Pakistan.

Another area where legislative progress has been witnessed in the past decade has been the protection of child rights. The increase in punishment for child pornography and sexual abuse, along with the prohibition of child employment and their protection against abuse are significant steps towards protecting our future. Reform of the juvenile justice system calling for the creation of mechanisms for rehabilitating juvenile convicts is another step in the right direction.

Despite these progressive legislations, Pakistan has also witnessed a concurrent list of laws, brought to parliament under the need to strengthen prosecution of terrorists, which have simultaneously constrained individual liberties. The Protection of Pakistan Act, the Pakistan Electronic Crimes Act, amendments to Anti-Terrorism Laws and the Free Trial Act have increased the ability of law enforcement agencies to conduct surveillance on citizens, detain and arrest citizens in physical remand for an extended period and crackdown on freedom of speech on social media platforms like Twitter and Facebook. These have coincided with regulations under existing PEMRA laws that have sought to tighten the grip of the government on a burgeoning free media in the country. These trends have bucked the positives from progressive legislation over the past decade and straitjacketed individual liberties in an age of violence and terrorism.

At a more structural level, the lack of progress on enforced disappearances despite judicial activism and civic demand remains troubling. This despite the implementation of Military Courts to prosecute terrorists, has raised questions about the legality surrounding detentions and arrests.

Implementation of progressive legislation too remains a stumbling block in the actualization of rights in Pakistan. While some steps have been taken in training police, prosecutors and the judiciary in implementing and applying these new laws, change remains slow, if incremental. Perhaps the most impactful change has come in areas where women’s participation in mainstream policing, prosecution and judiciary have increased. Here, women have been cognizant of laws that extended protection to other women. As the gender equity increases in traditionally patriarchal justice roles a gradual improvement in the application of pro-rights laws can be expected.

The past decade of legislation affecting fundamental entitlements betrays a mix of progress and regress. Whereas some of the long standing demands of rights groups have been met, the regress on freedom of speech remains of critical concern, not only because it hampers a key function of a healthy democracy – accountability – but also because it constrains the kind of civic activism that has led to progressive reform over the past decade. As the new government charts an aggressive agenda for human rights reform, the hope remains that important legislation that has fallen off the radar is brought back into parliament.