A Legacy of Deficits 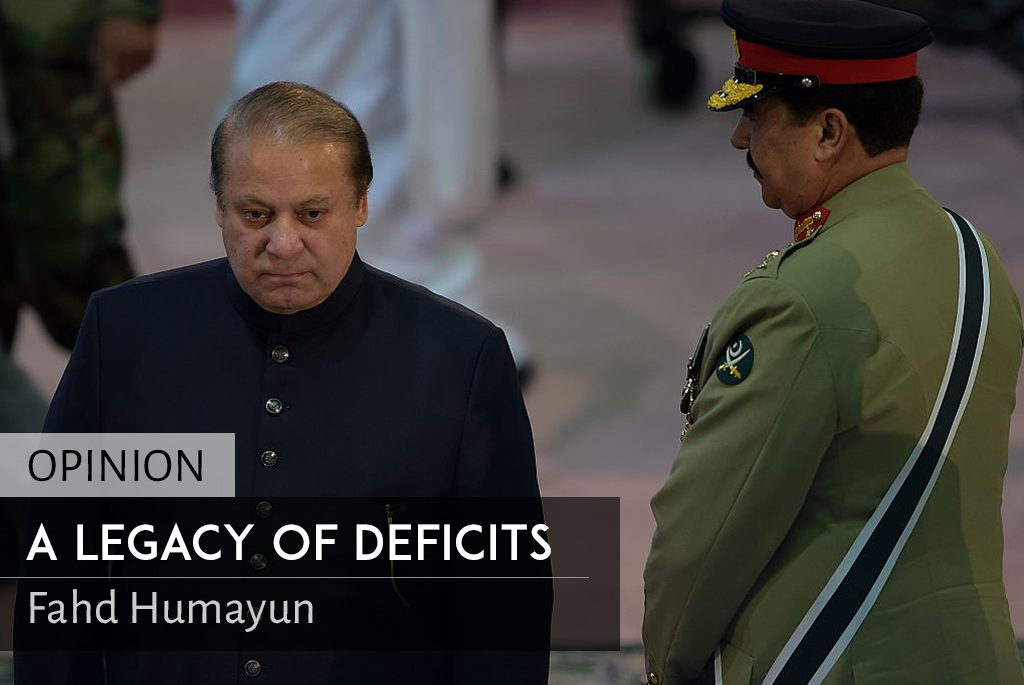 The odds that the PML-N was going to be remembered for having contributed meaningfully to Pakistan’s foreign policy and reputation-building abroad were never high to begin with. But Nawaz Sharif’s latest blunder on India has only resurrected the ghosts of his party’s gross mishandling of foreign policy. Three performance deficits stand out.

The first has to do with the party’s marginalisation of democratic institutions. This was most recently on display with the leadership’s sudden and unexplained missive to deploy troops to the Middle East at the behest of Saudi Arabia. Over the course of the past five years, political stakeholders across the aisle have had to work hard to resist getting sucked into yet another geopolitical conflict. But the PML-N’s penchant for letting executive declaration override parliamentary injunction, both during and after Nawaz’s tenure, managed to delegitimise the policy process.

In 2015, a joint session of parliament commendably debated Pakistan’s involvement in Yemen, and settled for neutrality. Ideally, Yemen should have been a brave and principled turning point, reflective of parliamentary prerogative feeding into foreign policy formulation. But what followed was a tale in strategic missteps, from privatising diplomacy with India to disregarding parliamentary deliberation into Pakistan’s involvement in the 36-nation Islamic Military Alliance. The former cost the ousted prime minister space and territory in India, while the latter showed an autocratic unwillingness to demonstrate parliamentary leadership, galvanise legislative bodies around key national security conversations, and encourage political debate.

On China, meanwhile, this government rightly made CPEC its focus but the PML-N leadership dragged its feet when it came to addressing political misgivings on feasibility, regulatory reach and enforcement, and the awarding of contracts. On average, consistent non-transparency by a PML-N that operates like a close cabal has only added to democratic anxiety and compromised hard-won civilian agency.

The second failure has to do with the gradual but preventable erosion of Pakistan’s international standing, made worse by the political inertia at home. Micro-management of key portfolios simply left too much undone in strategic ministries. Pakistan’s return to the FATF grey-list in March was as much a result of institutional lethargy as it was a monument to the failure to appoint a full-time foreign minister, the delay in the government’s outreach to the Trump administration, and the usual indecision when it came to filling key ambassadorial posts.

Pakistan finally regained membership of the strategically vital UNHR Committee in 2017, but it should never have lost the seat in the first place. And Islamabad should not have responded with silence after India’s National Investigation Agency quietly cleared Pakistani state apparatuses of involvement in the Pathankot attack in 2016. On Kashmir, the government chose an unwieldy diplomatic strategy of dispatching envoys to foreign capitals to highlight Indian brutality in IHK, sans a clear follow-through, feedback to parliament, or efforts to mount a sustained and robust diplomatic and political defence of the Kashmiri cause.

The reconstitution of the parliamentary committee on national security took place four years after the government was formed; during these years thr country would have benefited from informed and inclusive deliberations on foreign policy. Finally, it took a full five years of foot-dragging before the cabinet division was instructed to fill the empty Pakistani chairs at 14 international universities in the US, UK and Turkey, Iran, Egypt, China, meant to be conduits in the service of image-building abroad.

The third and final failure has to do with a lack of strategic vision defining Pakistan’s engagement abroad. Although gains were made in ties with China, Saudi Arabia and Russia, relations with the US, Iran and Afghanistan soured. While many of these setbacks had to do with externalities beyond Pakistan’s borders, relationships left on autopilot only invite miscommunication. The next government, whoever’s it will be, will have to work hard to repair ties on these fronts. This includes advancing broad-based relations with both Riyadh and Tehran, not as indivisible goalposts but as mutually reinforcing prerogatives embedded in a clear understanding of Pakistan’s own interests. Pakistan can also not let the US’s pullout from the international JCPOA frustrate the regional search for improving ties with Iran. Javed Zarif’s last visit to Islamabad only underscored Pakistan’s own sluggishness in operationalising the Iran-Pakistan Preferential Trade Agreement.

Meanwhile, disengagement with the US is in neither side’s long-term interest. A new government in Islamabad will have to continue developing cross-party and multi-stakeholder consensus on the contours of the future Pak-US engagement, to ensure civilian-military uniformity on what will be Pakistan’s foremost foreign policy challenge in a changing neighbourhood. The new government must also prioritise the reset with Russia. Despite the recent surge in defence and economic partnerships with Moscow, a Russian head of state has yet to visit Pakistan. The next prime minister will be in a position to extend an invitation while looking to build up bilateral trade, defence and infrastructure cooperation, including expediting the North-South gas pipeline.

Finally, a second consecutive democratic transition at home is as good an enabler as any for policymakers to think pragmatically and innovatively about a foreign policy that is responsive to national interests, and the next decade of international relations. Locating Pakistan in a new world order requires defining its role in a meaningful way, which can only be done with vision and leadership.