An Anatomy of Sharif’s First 100 Days 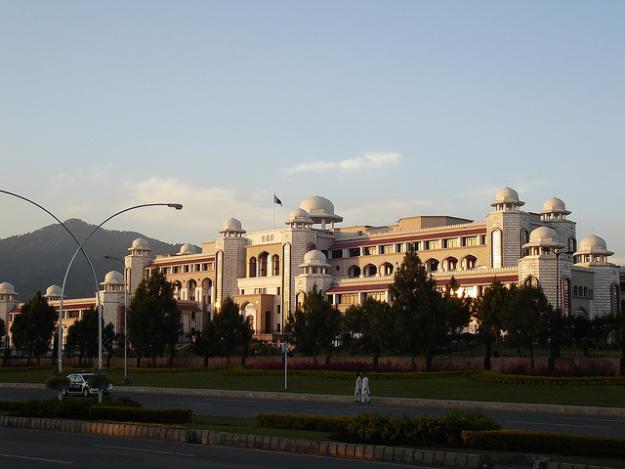 For a third-timer it’s been a laborious start; a triumphant return to power notwithstanding, the first 100 days of Prime Minister Nawaz Sharif’s government have been decidedly short on deliverables. Between June 5  when the Prime Minister and his cautiously designed cabinet first took oath – and his official 100-day mark, the world has shifted on its heels. Violence in Egypt and the prospect of punitive action against Syria are indications of an evolved external environment, while closer to home increased skirmishes on the Line of Control in Kashmir, and the border with Afghanistan have cooled relations with Pakistan’s neighbours.

This 100-day phase has clearly lacked the direction and clarity of vision needed to deal with the nation’s cumbersome challenges. The new government’s cabinet ministers are uninspiring relics, unable to channel the innovative thinking required to address a radically altered domestic and external environment. Balochistan – the country’s largest province – is still functioning without a provincial cabinet since the PML-N has failed to finalize a list of cabinet slots despite the readiness of its coalition partners. As the security and law and order situation in the restive province teeters on a knife-edge, further delay in closing on slots for Balochistan’s cabinet is only likely to aggravate the situation.

While Sharif’s previous stints in power have been far from acceptable, this third run looks depressingly unpromising. Fundamentals seem to be a challenge. Three months into the PML-N’s reign, for instance, countless cabinet, bureaucratic and diplomatic posts lie vacant, signaling the inertia that has become a hallmark of the Sharif administration. Micromanagement of key portfolios, for instance, is leaving a lot undone in strategic ministries. Pakistan has been without an ambassador in Washington for the past four months, and there is no indication that this critical post will be filled anytime soon. The absence of an ambassador in the capital of the world’s most powerful country and a key ally does not bode well for relations between the two nations – or for a rapidly changing regional dynamic. Moreover, the absence of a sitting foreign minister was felt acutely during Afghan President Hamid Karzai’s visit last month that saw the signing of several economic accords but no major breakthrough on the Taliban prisoner issue.
It’s not as if some public time has not been spent debating the terrorism question within. The Prime Minister has rightly pointed out that economic progress and political stability in the country are not possible without eradicating terrorism and violence, particularly in volatile Karachi. Yet with little real cognizance of these issues, the new government seems to be out of its depth, as Mr. Sharif appears to be pursuing a policy of appeasement and providing space to militant and sectarian outfits, particularly in the Punjab. By throwing its weight behind unconditional negotiations with the Taliban, this month’s trumpeted All Parties Conference has served a deathblow to Pakistan’s struggle against the insurgency. Without having made the laying down of arms a pre-requisite to negotiations, the latest APC aptly illustrates the ambivalence of the Sharif leadership in tackling homegrown militancy. While on the one hand there is no guarantee that the dialogue will be a success, on the other there exists the inherent danger that the Taliban will use this breathing space to reorganize itself. The insurgency’s war of attrition has showed no signs of slowing down so far – there have been more than one hundred incidents of terrorist activity in the first 75 days of the new government’s tenure, and the latter has been slow to move on announcing a cohesive counterterrorism strategy. The DI Khan episode – which saw the escape of 248 prisoners as the result of a high-profile TTP coordinated jailbreak, is just one example of this dwindling law and order situation.

On the critical economic front, the power crisis seems to have consumed much of the new government’s initial attention, and understandably so – the PML-N spent much of its election campaign promising to completely eliminate electricity loadshedding. However, by paying off around Rs. 500 billion in circular debt – raised largely through bank borrowing – the government has only managed to marginally improve the power supply situation. A long-term solution still remains elusive, however. Admittedly the energy policy announced by the government does provide for a comprehensive redress of the crisis, but any success depends on the government’s seriousness in implementing unpopular policies. So far, for instance, no steps have been taken to revamp the Distribution Companies (Discos) that are largely responsible for the massive leakages.

While the Sharif government has rightly prioritized economic revival, there is still no sign of the administration having initiated fundamental structural reform to put the economy back on track. So far, a number of infrastructure and development accords have been signed with China, and the government has also agreed to a $6.7 billion IMF bailout package to be paid over a period of three years that may give it much-needed breathing space. But under the latest agreement, Pakistan is also required to bring down its spiraling fiscal deficit, enact reforms to increase growth, and improve the rate of tax collection. The government has taken some measures to curtail current expenditure, but no substantive move seems to be in the offing to reform the current taxation system and enhance revenue generation. As a result, bank borrowing has seen a huge rise in the first three months, making it very difficult for the government to bring down the ballooning budgetary deficit and achieve its target of 4.5 per cent in the current fiscal year. Without broadening the tax base, the crisis in public finances may just sharpen.

At the same time, no substantive measures have been taken to restructure or disinvest losing state-sector enterprises that are a massive drain on the national exchequer. Among them are PIA, Pakistan Steel Mills and Railways whose growing losses have become untenable. In fact, to give some perspective, the combined losses of these public sector organizations and the power sector now equal the country’s entire defence budget. Clearly, therefore, prospects for economic revival will continue to remain limited unless this critical issue is addressed.

As the new government approaches its 100-day mark, there is a sense of lost opportunity in the air, and a hope that the new democratic transition begun in the last government will not fritter its local and international public capital. Because ultimately, in the absence of a comprehensive strategy to deal with key domestic and foreign policy challenges, big promises are no substitute for hard dividends. Pakistan is still waiting for the Sharif government to wake up and move past its initial learning curve. It is time to start rolling out the promised reforms.