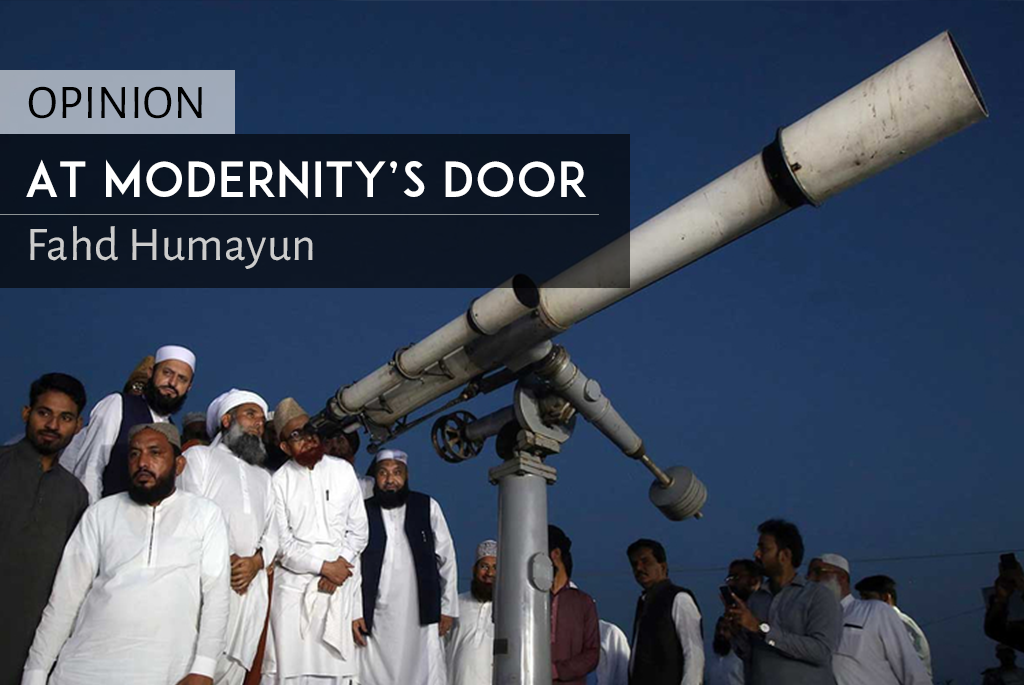 Shortly before Eid, an android application for moon sighting was made available on Google Play. A calendar that can be accessed through Pakistan’s first official ‘moon-sighting’ website now indicates scientifically determined dates for major Islamic events.

The app and website kicked off a conversation about rituals and their symbolic currency in a country that still takes its cues from religious praxis. The Ruet-i-Hilal Committee’s monopoly over moon sighting is now subject to public and political debate. With it, is an age-old question: can tradition and modernity coexist in a state where both are singularly contested, and both view each other with suspicion?

There are two reasons why we don’t have a clear answer.

The first is a failure to establish clear parameters of what modernity means, and what it should look like for the median citizen who privileges faith, but also panders to conventional paradigms of consumerist progress. Today, Pakistanis are flocking to cities faster than any other country in South Asia. Yet one in eight urban dwellers lives below the poverty line, and one in 10 children in Lahore, Peshawar and Karachi remains out of school. This new cohort believes it is more modern than the previous generation, but does not benefit from opened-up choices in education, at work and among lifestyles critical to modernity and economic freedom.

The second reason is a public discourse that sacrifices critical inquiry at the altar of conjecture, analogy and myth. It was only seven years ago that a self-styled engineer burst onto Pakistan’s TV screens claiming to have invented a ‘water kit’ enabling cars to run on water. The then cabinet met thrice to discuss the water vehicle, while the media rushed in to celebrate a new national hero. All this took place while the inscription on Pakistan’s first Nobel laureate tombstone was being frenziedly edited on a district magistrate’s orders.

For a low-value agrarian economy that has struggled to sustain a clear narrative for modernity, or its place in national life, these contradictions should be unsurprising. Our yearning for progress often wrestles with political entrepreneurs with arbitrary notions of modernity. Scientists in elite universities in our bigger cities shy away from teaching evolution. Government-sponsored science textbooks are unscientific. Pakistan may be the seventh most vulnerable country to climate change, but only a few years ago, our then climate change minister blamed Indian power plants for a heatwave in Karachi.

Without a social systems framework to nest their aspirations in, Pakistanis today live in what they are told is a modern age, hyper-exposed to editorialised threats (ie fifth-generation warfare) and hybrid enemies brought to them on plasma TVs and Samsung smartphones. The nativisation of the telecom revolution has skirted around social class barriers, democratising cellular technology and therein the internet. Pakistan has 60 million 3G/4G users and some of the cheapest data prices in the world. CPEC will expedite these processes, with 800 kilometers of fibre-optic cable and expansions by China Mobile connecting more Pakistanis to the internet than ever before.

Hence, we find ourselves digitising a median citizen who is not experiencing education, social and political reform — processes that undergird wholesome national transformation. Pakistan has under 100 researchers per one million citizens and national expenditure per researcher is declining. Pilgrims outnumber taxpayers. Meanwhile, the siren of the smartphone has created a new medium for consumers who use conservatism as a marker of identity, and Whats­App as a register of social expression.

Another challenge to modernity is from the public square itself. If the public square has been less than successful in segregating tradition from the notional importance of scientific inquiry, it is worth recognising the policy failures that have led to this. Gross spending on R&D is an important indicator of how much is being invested in the future of science. Pakistan’s is less than 0.3 per cent of GDP; India’s is 0.9pc. Weak patent enforcement offers low rewards for innovation and knowledge creation.

Too often we forget that home-grown visionary scientific leadership resulted in Pakistan’s international participation at the high table of global science and research, including at CERN. But the inconsistencies are glaring, in part because these achievements have not been situated in a coherent narrative of national progress. At home, technology is instrumentalised for coercive purposes rather than education. Last year, Pakistan was ranked 73 out of 100 (100 being the worst) in a global Internet Freedom Status index. So it makes sense why the sighting of the Ramazan and Shawwal moons instigates controversy. We may be a voracious primetime audience, but have yet to democratically negotiate modernity and the changes it ushers in.