Beyond Highways and Corridors 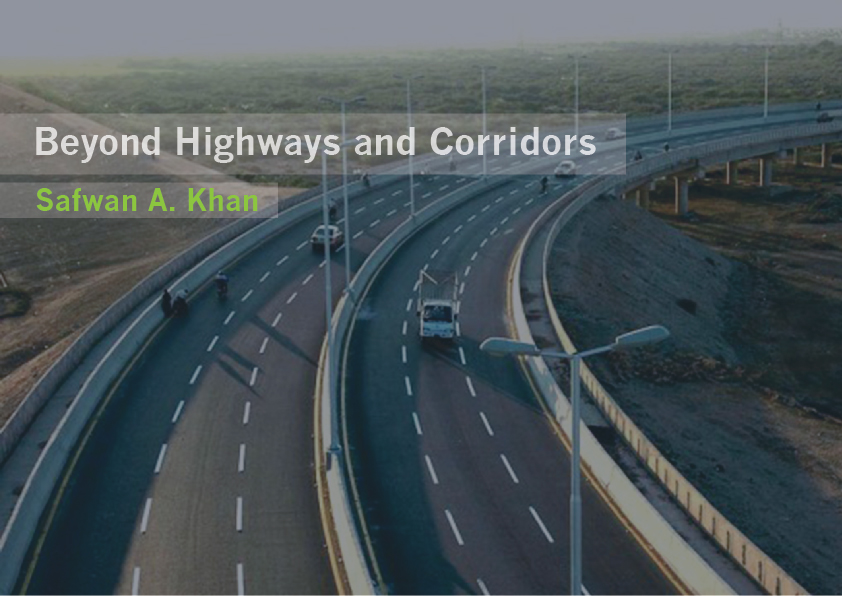 When the federal government confessed to committing a ‘typo’ in the official economic growth rate figure announced last year, it didn’t come as a surprise to many who have now grown used to data manipulation that serves little more than self-appeasement.

The current government is known to have an appetite for pro-growth policies and yet, after over two years in office, economic revival remains a distant promise. Large-scale manufacturing continues to lag and despite the granting of the much-hyped European Union GSP+ status, the trade deficit has widened.

With Pakistan’s economic growth hovering at the abysmally low rate of 3 percent over the last many years, there is consensus across the political divide that thrusting the economy forward on a path of progressive growth has become crucial. The debate that the routing of China Pakistan Economic Corridor (CPEC) has sparked – given the spin-offs it entails in terms of economic uplift in adjoining areas – is instructive and an apt reflection of this consensus, with all provinces positioning for a piece of the Chinese pie.

But there are also legitimate concerns that the relentless pursuit of growth-oriented policies might succumb to regressive tendencies. That a government, fiscally tied up by deficit constraints under the IMF’s Extended Fund Facility,  continues to be enamoured by mega-projects offers little respite against these concerns. Time and again, development spending on crucial sectors such as health and education – already under par with regional spending – has taken the brunt to keep the deficit in check.

Fragility of the fiscal balance due to a persistently low tax to GDP ratio has meant that despite historically low global commodity prices, the government has had to resort to increasing GST on petroleum products and continue its reduction in energy subsidies – fuelling inequality despite an overall decline in inflation. Without redistributive policies that run parallel with the growth agenda, inequality traps will persist and continue to erode the social fabric, a reality that now threatens domestic security.

As a percentage of GDP, expenditures on health and education have been as low as 0.4 percent and 2 percent respectively. Any vision for long-term growth and stability will remain unachievable without prioritizing social sector spending. Indeed, investing in human development will be essential for flattening social pyramids and mitigating what has evidently been termed as ‘multi-dimensional inequality’. Given that most of the social sectors now fall under the provincial domain, the continuation of the 7th NFC award by the federation has come as a disappointment. At the same time, there is a visible need for provinces to improve social sector governance along a multitude of parameters before more funding is allocated to them.

As it sets out the next budget, the government also needs to look beyond the annual Pakistan Economic Survey and engage in some introspection on its own economic management. In spite of a number of committees that are headed by the finance minister himself, the concentration of economic decision making has had little effect in improving economic management.  Disconcertingly, the government has taken to the habit of introducing mini-budgets – up to five of them were announced through the outgoing fiscal year – as it kept faltering on meeting revenue collection targets. The LNG fiasco is another area which revealed how poorly gas imports from Qatar were managed. From pricing to docking and distribution, the Ministry of Petroleum and Natural Resources was found lacking a robust plan to administer industrial energy needs. Circular debt has resurfaced in the energy sector as a haunting menace and the PML-N finds itself at odds to even cater to what is supposedly its leading constituency – the business and industrial community.

When Finance Minister Ishaq Dar concluded the seventh EFF review meeting with IMF officials this month, he was given a mostly-positive performance review on macroeconomic indicators. What remained amiss, however, was the FBR’s revenue collection. Falling short of its target this year, the FBR’s inability to expand the tax net will continue to hamstring fiscal outlays in the forthcoming budget. The burgeoning budget deficit is expected to cross 4 percent in the upcoming fiscal year on account of extra spending requirements of the military operation, rehabilitation of IDPs and allocations for large scale infrastructure projects.

Having taken the flak for unilateral decisions on economic management, the government has now heeded some advice by withdrawing powers of the FBR to single-handedly issue tax exemptions through the infamous SROs. However, revenue collection does not remain short on account of SROs alone, and the government will have to take bolder steps to bring tax-evaders into the tax net, expand the overall tax base and improve revenue collection of direct taxes instead of increasing indirect taxes to meet IMF conditions.

The expiry of the 7th NFC award at a time when there is mounting pressure to raise revenues and control the deficit should have given the government an incentive to revamp provincial tax administration. While there has been some success in provincial tax collection, the total provincial contribution in overall revenues remains less than 7 percent. But like the budget strategy paper that was brought to debate only a month before it was to be presented at the parliamentary floor, the 9th NFC commission was convened with barely two months left in the expiry of the last award – an unfortunate reminder of how economic management remains most receptive to external actors like the IMF and continues to elude domestic consultation.

Provinces have rightfully been against the continuation of the 7th NFC award. Given additional expenditure requirements following the 18th amendment, provincial governments now seek an increase of up to 60 percent in the divisible pool of revenues. But of greater significance is their demand for restructuring of determinants of the award beyond population parameters. This will be necessary if some level of inter-provincial harmony is to be maintained lest it falls prey to the kind of controversy that has embroiled the CPEC.

Aside from the establishment of local governments for efficient spending on public goods at the district level, the formation of Provincial Finance Commissions has been proposed to devolve financial responsibilities to the provinces. Additionally, it has also been recommended that the Council of Common Interests (CCI) be consulted to determine the distribution of responsibilities among the three tiers of government before a new award is finally made. Most importantly, the NFC provides an opportunity to address concerns related to devolution of the taxation structure and duplication in taxes levied at the provincial and federal levels that squeeze and discourage existing tax-payers. Given the frequency of crises in public finances, it has objectively been recommended the new NFC award include a ‘tax effort’ criterion to enhance revenue collection at the provincial level and rectify procedural constraints in tax filing.

Finally, on the expenditure front, Pakistan’s internal security problem is well-recognized, and the Finance Minister’s concerns about additional spending requirements on account of Zarb-e-Azb and the ensuing IDP crisis are understandable. But interestingly, not only has the exact figure for these additional military-related expenditures varied, there also remains little clarity about its breakup. Perhaps, the IMF may have been notified of both these crucial details, but for public perusal and parliamentary debate, they should be included in the upcoming budget draft as well.

The writer works at Jinnah Institute. He tweets at @safwanazizk