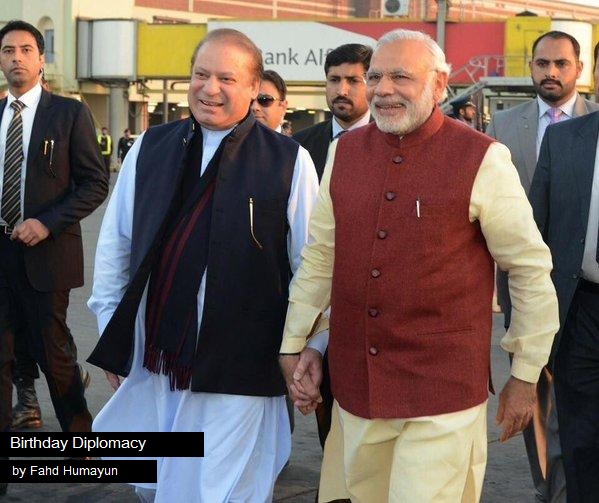 A month ago, the odds of Prime Minister Modi surprise-landing in Lahore on Christmas Day to meet his Pakistani counterpart were next to nil. But thanks to what has arguably been the most frenzied bout of diplomatic activity this past decade, 2015 is ending on a foreign policy high for South Asia’s two largest neighbours. From outright hostility one day, to Lahori hospitality and charm the next, the India-Pakistan relationship is showing signs of a much-needed transition away from the conflict cycle.

The turnaround in New Delhi’s attitude to Islamabad has been labeled many things, from a volte-face to a costly climb-down. Both assessments are off the mark. The chief signals out of New Delhi, from the swearing-in at the Rashtrapati Bhavan last May, to recent revelations of an off-the-record hour-long meeting between the two leaders in Kathmandu last November, have suggested that Prime Minister Modi has wanted to engage with Pakistan from the get-go, but was constrained by both party policy as well as the bar of disengagement set by the UPA administration. Prime Minister Modi’s other Pakistan problem was that his BJP stalwarts did not quite see outreach and saber rattling as mutually exclusive and politically costly models for engagement.

To read the recent Indo-Pak thaw as a climb-down by Prime Minister Modi would also be misleading. The BJP foreign policy team led by EAM Swaraj and Foreign Secretary Jaishankar seems to have, not inaccurately, assessed that talking tough to Pakistan has failed to deliver as a strategy in any meaningful way. The fallback solution: raise Prime Minister Nawaz Sharif’s own personal stakes in the peace process to the extent that Pakistan feels compelled, if not coerced, to move against anti-India spoilers. Modi’s chopper to Raiwind is to 2015 what Vajpayee’s bus to Lahore was to 1999: in other words, if the relationship were to take a hit now, à la a Mumbai-II, policymakers in India will be well placed to spread their palms and say ‘We tried.’ In the long run this is a smart move by New Delhi – play the Roosevelt card of talking softly but carrying a big stick, while quietly pushing the onus for relationship insurance onto Islamabad and Rawalpindi.

Prior to Lahore, the two PMs had so far met on four occasions: in New Delhi and Kathmandu in 2014, and Ufa and Paris in 2015. On at least three of those occasions, Prime Minister Sharif came out worse for wear, mauled for seen as having made ‘concessions’ by a nationalistic media in hyperdrive that was responding to unrestrained jingoism from across the border. With each official encounter, it was becoming clear that Prime Minister Sharif’s desire for improving ties with India was fast becoming his own worst enemy. The BJP thus realised that a narrow window for reconciliation, that has been open in Islamabad since 2005, could be in danger of shutting altogether before the Modi government could reach the middle of its first term. Timing in South Asia has always been a critical determinant of policy change. Problematically, the BJP also got in its own way on the state election trail, with political warmongering and imperial hubris from New Delhi to Jammu creating the space for the LoC’s steady Dovalisation, and the sanctioning of disproportionate retaliation for cross-border shelling. Gurdaspur and Udhampur followed, complicating the timing for either side to engineer any substantive breakthrough.

In this vein, it is quite likely New Delhi had hoped to use Ufa in July, rather than Paris in December, to broker the beginnings of a peace deal. With Prime Minister Modi’s regional credibility on the line, and whispers of a potential SAARC 2016 no-show already gaining traction, New Delhi had to get ahead of the news cycle. It managed to do this by green-signaling Bangkok as a venue for the two NSAs and Foreign Secretaries to clandestinely meet away from the heated vitriol of primetime newsroom TV. A new NSA in Islamabad can also take credit for dissipating some of the skepticism harboured by Indian interlocutors, who eight years on refuse to be fully convinced of Pakistan’s democratic moorings.

But in terms of motivation, to say that India views and desires peace with Pakistan as an end in itself would be stretching it. The push for engagement over estrangement with Islamabad has just as much to do with the unfolding situation in Afghanistan, and how India views road access to Kabul as an aspirational strategic good. The case making the rounds this past year-and-a-half is that progress on terrorism, or lack thereof, has held the bilateral relationship back. But the realpolitik reality is that a Pakistani redressal of terrorism may do less to improve the relationship than a terrorist repeat will do to set it back by another decade. This is clear from the fact that the present end-of-year détente and seasonal cheer has little to do with the merits of Operation Zarb-e-Azb that has been relentlessly flushing out terrorists since 2014, or the reduced space being afforded to radical groups in Punjab.

Instead, New Delhi’s behaviour is increasingly driven by the bigger regional dynamic: trade access to central Asia, transit through K-P and Punjab, permission for Afghan trucks to reach Attari, and Central Asian gas via TAPI are the new big ticket items to be had through Indo-Pak rapprochement. The EAM’s last-minute visit to Islamabad for the Heart of Asia summit is indicative of the significance of the Afghan factor in catalysing any strategic re-think on Pakistan. Given the Afghan state’s own fragilities, and the need for regional stakeholders to be on the same page to facilitate stability, India’s Kabul-focus may not necessarily be a bad thing in the short-term, provided it doesn’t overstep into a search for strategic sway.

From this perspective, the real holy grail of India-Pakistan confluence lies outside Islamabad and New Delhi, and India quite possibly hankers for NDMA more than it lets on, if only because ratification of this long-stalled trade agreement could potentially open up the floodgates of Central Asian economic and revenue advantages, and help operationalise the 2011 Indo-Afghan Strategic Partnership Agreement. So if any ‘breakthrough’ takes place before the 19th SAARC summit in Islamabad under the promise of a revamped Comprehensive Bilateral Dialogue framework, it’s likely to be on trade and transit, not on terrorism or territory.

It is also clear that Islamabad and New Delhi are increasingly relying on secret diplomacy as the chief modus operandi for engagement, a lesson learnt perhaps from the debris of the PR debacle that followed Ufa, and from strong anti-Pakistan voices within India’s own sizeable rightwing. Nor should the behind-the-scenes role or fingerprint of ‘family-diplomacy’ be underestimated, in as much as it has allowed both sides to find useful footholds for personal engagement, beyond the parameters of their respective Foreign Offices. Handwritten letters, not hotlines, may have done more to shore up political trust between the two statesmen than is immediately apparent.

So far this is a strategy that has delivered results, from the NSAs’ meeting in Bangkok, to the unannounced stopover in Lahore. But going forward, it will be important to keep policy stakeholders, Opposition leaders and democrats in both Parliaments debriefed and on board, not kept in the dark when it comes to debating important foreign policy decisions. This will be necessary to avoid a repeat of Ufa and to cultivate long-term parliamentary stakeholders invested in regional normalisation, particularly in the Lok Sabha.

Like with any détente, the hard work begins after the first handshake. Until November 2016, which is when the SAARC summit is expected to return to Islamabad, the two Prime Ministers have an unprecedented opportunity to pave the ground for, and build on, substantive engagement. Assuredly the new India-Pakistan Comprehensive Bilateral Dialogue format will not be inured from the usual teething troubles and relationship snags i.e. over the Hurriyat and progress in the Mumbai and Samjhauta trials. But it is worth noting that Prime Minister Modi’s visit to Lahore took place 15 years to the day of the hijacking of Indian Airlines 814 traveling from Kathmandu to New Delhi. While India and Pakistan may not have completely turned the page on bad history, they have certainly come a long way. And if the two Prime Ministers can continue to show the sort of statesmanship they displayed this December, there is much to be hopeful for.