Bring back the Moratorium 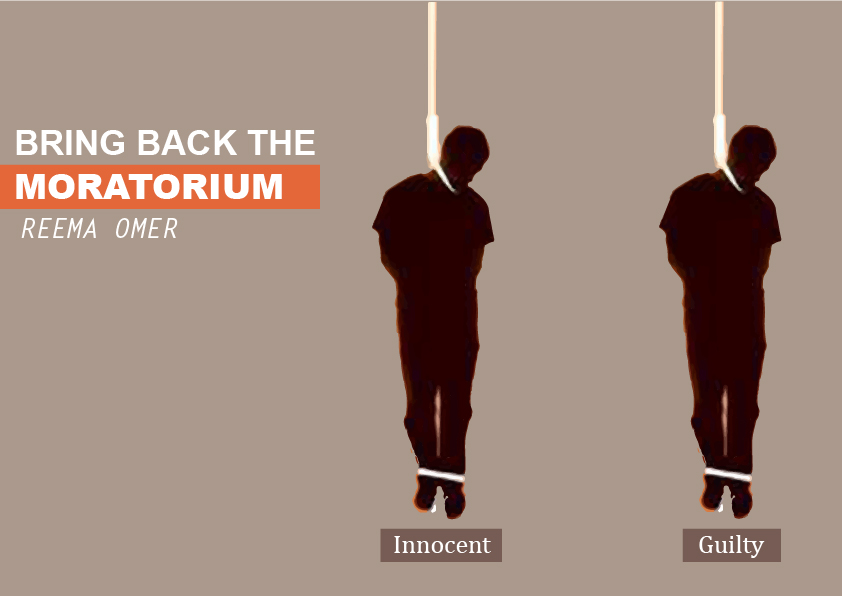 Pakistan has executed more than 170 people since it discarded the country’s informal six-year moratorium on the death penalty. At risk of imminent execution are a further 400 people that have exhausted all avenues of appeal. At this rate, Pakistan is about to join the list of government executioners such as China, Iran, Iraq and Saudi Arabia.

Pakistan officially revoked the moratorium in reaction to the horrific terrorist attack on the Army Public School in Peshawar, which killed 150 people – most of them children – in December. At first, the Government partially lifted the moratorium for offences related to terrorism as part of the larger National Action Plan. However, in March 2015, the Government, without giving any reasons, brought back the death penalty for all capital offences.

Through this hanging spree, the Government is attempting to divert attention from its failure to effectively address the serious threat posed by violence from conflict with insurgent groups and acts of terrorism. It is essential, however, that the resumption of the death penalty be viewed as what it really is: an inhumane and cruel punishment that constitutes an assault on human dignity and the right to life, which has no demonstrable deterrent effect on terrorism and other crimes.

Pakistan resumed executions, a day after a strong majority of 117 UN Member States voted at the UN General Assembly in favor of a resolution emphasizing that the use of the death penalty undermines human dignity. The resolution also called on those countries that maintain the death penalty to establish a moratorium on its use with a view towards abolition. Only 37 states, out of 195, opposed the resolution. Passed for the fifth time since 2007, the resolution demonstrated once again the ever-strengthening global trend that views the death penalty as a violation of the right to life, and a cruel, inhuman and degrading punishment. Currently, more than 150 countries worldwide have abolished the death penalty in law or in practice. This includes 30 states in the Asia-Pacific region, including Nepal and Sri Lanka.

Resumption of executions not only puts Pakistan against this global trend, it also risks irreparable miscarriages of justice through execution of the innocent. In Pakistan, the death penalty is often imposed after grossly unfair trials, which have long been documented by human rights groups. Shafqat Hussain’s case, which has lately been in the spotlight, highlights some of these concerns.

Shafqat’s lawyers claim that he was only 14 years old when the abduction and manslaughter, for which he was later convicted, were committed. Capital punishment for individuals that are under 18 at the time of the crime is absolutely prohibited under Pakistani law as well as international law, including the Convention on the Rights of the Child. In addition, the case has also raised serious issues on torture and ill treatment, the right to adequate defense, and Pakistan’s over reliance on the Anti-Terrorism Act, 1997, which have allowed anti-terrorism courts constituted under the Act to replace the regular criminal justice system.

After a human rights campaign urging an independent inquiry about his age at the time of the offence, the Government postponed Shafqat’s execution just a few hours before his scheduled hanging. But given that the fair trial concerns raised in Shafqat’s case are not unique but widespread and systematic, how can there be any certainty about the guilt of the people Pakistan has hanged since December; or that the hundreds that it is on course of executing, have received a fair trail and are truly guilty?

The problems with fair trials have become even worse after the 21st amendment to the Constitution and changes to the Army Act, 1952, which give military courts the jurisdiction to try offences related to terrorism and also to issue the death penalty. Pakistan’s Supreme Court has held in the past that military courts do not meet standards of fairness. The Army Act, however, bars appeals to civilian courts, including in cases where the death sentence has been given.

Pakistan’s flawed criminal justice system is a matter or concern in and of itself; however, it becomes entirely damning when the State purports to take life based on its findings. Former Prime Minister Zulfiqar Ali Bhutto’s politically motivated execution, where judges on the bench have admitted of being pressurized into delivering a guilty verdict and the death sentence, still haunts Pakistan and should serve as a reminder that the death penalty is final, irrevocable, and irreversible. Once executed, there is no possibility for correcting mistakes.

Contrary to the Government’s claims and public perception, the death penalty has no demonstrable deterrent effect on crime or terrorism. The UN Committee on Crime Prevention and Control has concluded that its research “has failed to provide scientific proof that executions have a greater deterrent effect than life imprisonment. Such proof is unlikely to be forthcoming.” This conclusion is consistent with other authoritative studies and was reiterated in 2014 by the UN OHCHR in a report on Iraq, which said that far from having a deterrent effect, it appeared that“implementation of the death penalty is merely reactive to increasing violence”, and given the weaknesses of the criminal justice system in Iraq, executing individuals whose guilt may be questionable “merely compounds the sense of injustice and alienation among certain sectors of the population,which in turnserves as one of the contributing factors that is exploited by extremists to fuel the violence.”

As terrorist attacks and armed conflict continue to claim more lives and bring human suffering, there is understandable anger, frustration, and fear in Pakistan. Nonetheless, this legitimate grievance must not translate into vengeance and bloodlust. Instead, it should be used to urge prompt institutional, legal, political and social reform from the Government and the armed forces that lies at the core of Pakistan’s security crisis.

The writer is a legal adviser for the International Commission of Jurists.