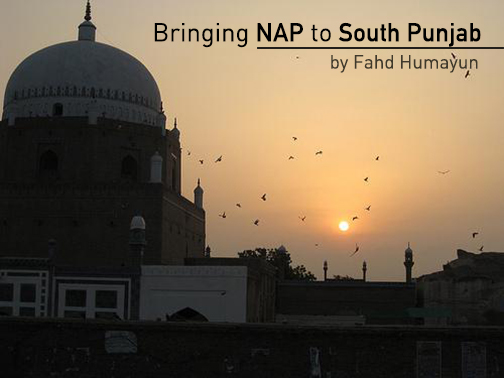 Two developments in early 2016 – the Punjab government’s move to detain Jaish operatives, and a high-profile Taliban attack on Bacha Khan University – have worked to refocus parliamentary debate on the selective application of the country’s year-old National Action Plan. At the eye of the storm is Pakistan’s ‘other’ badland, South Punjab, and its unfettered militant footprint that continues to raise critical questions, home and abroad, on the extent of the PML-N’s counterterror commitment and capacity.

The killing of Lashkar-e-Jhangvi chief Malik Ishaq in a police encounter last summer, together with the go-ahead given to search-and-kill operations, suggested the beginnings of a long awaited provincial attempt to close the gap between the state and Punjabi militants in 2015. The suicide attack on Home Minister Shuja Khanzada that followed swiftly exposed key gaps in the state’s counter-terror whitewash in Punjab. Network infrastructure, in the form of sleeper cells and support bases, continues to proliferate. Of Pakistan’s 1,764 most wanted, 729 hail from South Punjab. Only two out of Punjab’s 13,000 declared seminaries have been closed down by the provincial government, even after Senate was told last summer that over 150 madrasahs in the province are at the receiving end of foreign funding.

Having signed up for a long war with no overnight victories, bringing NAP to South Punjab should be seen as an unqualified good: extending the state’s counterterror reach to the eastern enclave can and will go a long way in servicing peace agendas, both domestic and external. A combination of geo-mapping and decisive follow-through by the FIA will be necessary to rein in rogue organisations in cities such as Multan, which has the highest urban density of religious seminaries anywhere in Pakistan. If terror sanctuaries can be closed down in the tribal belt, then the need to shut down cells operating of their own volition in Punjab should urgently translate into a tangible conveyor belt of combing operations, arrests and prosecutions, and de-radicalisation initiatives. This will require greater provincial ownership of the National Action Plan, a new declared counterterror center of gravity, clear multi-sectoral execution, and planning that goes beyond short-term maneuvering and selective employment.

In terms of state interventions, Pakistan will need to supplement action in Punjab with two related responses. Firstly, NACTA needs to be brought out of cold storage, resuscitated, empowered, financed, staffed and audited as a matter of national emergency. In the absence of the necessary machinery or budgetary allocation to fight a non-linear war and asymmetrical enemies, or serve as a credible inter-agency conduit, Pakistan has been left navigating a dangerous double-blind. Last January, the first members of the Punjab Anti-Terrorism Force (ATF) completed their training by Pakistani Army special operations commandos. Following the merger of the existing Punjab Counter Terrorism Department (CTD) with the new ATF, the province now has its own trained and equipped security muscle to take out militancy. But for Punjab to follow, NACTA must guide and lead the offensive, in tandem with the Punjab Strategic Coordination Act 2014 to enable effective terrorist fumigation.

Secondly, the operation in Waziristan needs to now graduate from military-led carpet-bombing to civilian-led building of livelihoods, capacity, infrastructure, without which the sacrifices of Zarb-e-Azb will see reversals. This will require a greater degree of accountability and transparency behind the FATA curtain, both of which have been in short supply since June 2014. Prolonging the militarisation of CT policy is also problematic, and will impinge on long-term rehabilitation initiatives and political counterterror ownership in Islamabad. Pakistan simultaneously needs to begin surgically plugging the gaps on its side of the Afghan border, with or without Kabul’s consent. This includes surveillance, digging, and armed patrolling. While Pakistan supports and is ready to facilitate Afghan-led and owned plans for stabilisation, KP’s cities and universities should not have to pay the price of ANSDF shortcomings or Western military failings while the Pakistan Army singlehandedly fights a difficult inland counterinsurgency operation. This is not to absolve Pakistan of responsibility or skin in the game: January’s attack on BKU underscores the need for Islamabad to abandon its selective pursuit of terrorists; terrorists hunkering down under forested cover in Afghanistan will continue to find willing abettors on the Pakistani side as long as there are constituencies in South Punjab and elsewhere ready to give violence a mandate.

For policymakers in Islamabad, the spatial distribution of over 57 banned organisations in South Punjab should add to policy anxieties at the Center, in as much that these trappings accentuate the potential for ISIS-K and Daesh inspired affiliates to infest the provincial, and from therein national, woodwork. Groups that operate with South Punjab calling cards will, critically, continue to hold back progress with India. Reclaiming this geophysical space and sequestering its hate literatures and ideologies can go a long way in reinforcing conventional battlefield gains in North Waziristan and Khyber. But this will require CT strategy to evolve from tactical leapfrogging to making that ultimate quantum leap from Miramshah to Multan and its auxiliary districts. Not because this is an Indian ask, but because refraining from doing so only retrogrades a painstakingly built national consensus and commitment to domestic and regional stability. That, and the fact that pleading six degrees of separation from what goes on in South Punjab is a copout, and a guaranteed way to lose this war.