Child Marriage and the Law 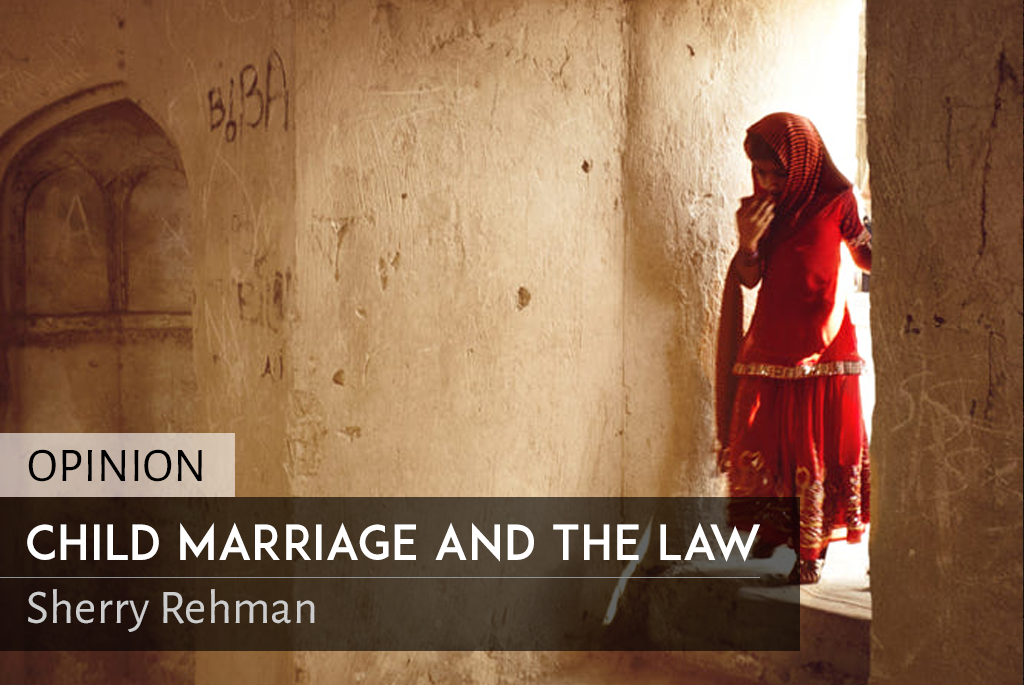 Pakistan’s children are its future. Yet not only is this generation put to work in homes, fields and factories, they are the silent objects of abuse and violence in ways that shock and stagger society. Most vulnerable in this generation are the young girls and boys forced to be married off before they reach any minimum level of adulthood. Girls especially become victims of such customs, while their bodies become the site of chilling exploitation through forced pregnancies and other predations including rape.

The task before us is very clear. We must do two things right away. The bill that has been introduced in the Senate recently has been through enough paths of compromise in committee and other forums like the Islamic Ideology Council, when Senator Sehar Kamran initially introduced it. The new amended bill to ban child marriage that I have laid before parliament has added key clauses after stakeholder consultations from the field. Basically, if the bill passes Standing Committees and votes in both the Senate and National Assembly, the Child Marriage Restraint Bill will ban marriages in the country before the age of 18. It will also clear the confusion about the definition and age of a child, which will also be 18, for the purposes of rights and obligations. This definition matters because children are forced into adulthood too early.

Right now, Pakistan’s federal law is still based around an act passed in 1929 when the British rulers of India had fixed the age of consent at 14. It was improved to 16 by the Muslim Family Laws Ordinance 1961. After 2010, the prevention of child marriages became a provincial subject, although Islamabad Capital Territory still fell under federal law, which continues to exercise an important framework reference for human rights obligations and precedence.

The view from the provinces, which also enforce their own laws, is patchy. Sindh is the only province so far to have passed a similar law, barring marriage until the age of 18. In Sindh, which provides a model law for the federation and other provinces, the law makes under-age marriages a cognizable and non-compoundable offence. This means that the police can take action on their own to arrest offenders upon any information, and no private justice-deals can be made between families, communities or jirgasto bypass the law. The Punjab Marriage Restraint Act, meanwhile, still allows girls to be married off at 16. The 2015 law allows police to register a case to stop child marriages, but they are not empowered to make arrests. Khyber Pakhtunkhwa and Balochistan continue to be governed by a 1929 Act, like the Federal law, which we seek to change.

The case for such a law is very clear. According to UNICEF, 21 percent of girls in Pakistan are married under the age of 18. 3 percent are married under the age of 15, but these are illusory statistics. In many cases the mapping of such practices on the ground is poor, especially in rural areas, so the reality may be likely worse. The social implications of early marriage are also well documented. Girls who marry too early, or in early adolescence are very likely to drop out of school than others. As it is 22.84 million children are out of school in Pakistan, which is a staggering number. 32 percent of primary school aged girls are not only out of school but drop out, so that by 9thgrade only 13 percent remain in school, according to Human Rights Watch.

When girls are forced to marry at an early age, they are more likely to face domestic violence, and such marriages render them at risk for early pregnancies and malnutrition. It is no secret that the high rates of maternal and infant death in Pakistan have a close link to early marriage, and like other developing countries the leading cause of death for young girls is early pregnancy, usually between the ages of 15 and 18.

The above-ground statistics for Pakistan, like the tip of the iceberg, are chilling. Every 20 minutes a Pakistani woman dies from childbirth or complications in pregnancy. This in many parts is attributable to a shockingly large number of women, especially under-age girls, having little power or agency over their bodies, nutrition, or even the lives and care of the children they bear. This is also why infant mortality is such a statistic of shame: as of updated surveys, 64 infants die per 1000 deaths, which puts Pakistan at the highest rate of infant mortality in Asia, worse than war-ravaged Afghanistan or even Yemen, according to the World Bank.

It is imperative then, that a changed model law must govern federal principles, as well as the provinces. The real challenge will lie in implementation, where the production of a CNIC should also be made mandatory for the registration of marriages, which carry on being recognized without the requisite identity documentation to support the marriage contract.

Pakistan must not use religion, or custom or whataboutery to send this law for consultation to any committee outside parliament. At stake is the country’s future, its children and its fundamental rights.