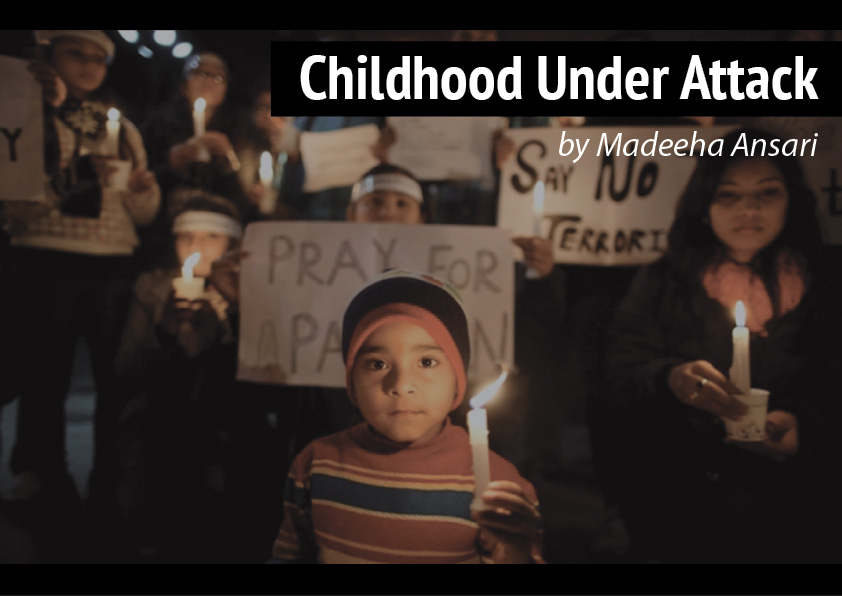 For a while, the silence following Zarb-e-Azb had been unnerving. Then,the apparent success in quelling terror began to be taken for granted, and national attention was diverted to dharnas and partisan politics. If there was an air of complacency before the brutal attack on the Army Public School in Peshawar, there is no room for it anymore. As calls for unity abound, and policy-makers convene to formulate a response, one of the foremost issues deserving attention is the protection of childhood.

Those reeling from grief and shock cannot help but ask, “Why?”

Why schools, why teachers – why children? Why a place designated for learning, playing and growing, populated by individuals who have nothing to do with the greater designs of politics or economics?

The truth is that strategic attacks on education have long been part of the arsenal of the Taliban. Pakistan is one of the cases studied by international organizations where attacks on education exist as a systematic phenomenon. According to the Global Coalition to Protect Education from Attack (GCPEA) these are defined as “any intentional threat or use of force directed against students, teachers, education personnel and/or education institutions, carried out for political, military, ideological, sectarian, ethnic, religious or criminal reasons.”

In 2011 alone, the UN reported that 152 attacks were carried out on educational facilities in KPK and FATA. Analysis of trends indicates that most of these were caused by improvised explosive devices (IEDs) during the night – intending to cause damage to buildings, with minimal loss of life. They served as political statements, symbolizing attacks on state infrastructure as well as on the ideology of progress encased by the physical classroom. The attack on Malala Yousafzai was among the isolated incidents where a child was targeted in a cold, deliberate attempt to kill.

This most recent incident is unprecedented in the scale of damage and horror – and the fear is that this may point to the beginning of a new chapter in the battle against the state. If terrorists, with their ideological justifications, have no qualms about harming innocent young people, then measures need to be taken to build all possible safeguards for the vulnerable.

There are two possible levels at which this consideration can take practical form. On a broader level, calls for unity need to have substance. If schools in Pakistan are at risk, a concerted effort must be made to safeguard them as centres of learning.

Similarly, there is a need to consider the deep impact that the experience of violence has on the individual child. While policy-makers are rightly concerned with finding and punishing the perpetrators of terrorism – it is time to carefully consider the needs of the victims as well. On 16 December 2014, 132 children were deliberately killed in an attack on a school that was taken to symbolize the armed forces. Over 100 remain in hospital. The hundreds of children who survived saw friends, colleagues and teachers being gunned down, knowing it could have been them. As eyewitness accounts show, they have learnt, too quickly, of the fragility of life. The trauma suffered by the children who survive such an incident cannot be dismissed. Such psychological stress can permanently affect the mental health, worldview, and even learning abilities of a child.

Beyond its role as a place of learning in the life of the child, the school can also be a place of healing. In the aftermath of the devastating incident in Peshawar, there is a need to develop programs for addressing trauma, building resilience and monitoring the mental health of students on an on-going basis. Precedent for this exists elsewhere; for instance, following Hurricane Katrina in New Orleans, a long-term program for Cognitive Behavioural Therapy was established to ensure that children were able to build coping mechanisms, in conjunction with the community. There will, of course, be culturally appropriate adaptations for psychosocial support in this setting. Family and community can play a central role in restoring a sense of normalcy for children, and giving them the courage to keep going to school.

The innocence of childhood is delicate and fleeting. Living in Pakistan with daily exposure to violence, it is difficult to insulate children and protect their faith in themselves as well as the world. The school is one space where childhood can be preserved, and young people can be encouraged to imagine a better future that they can work towards. If anything, it is time to reconstruct the school as a sacred place, where a child of this country can truly believe in the words emblazoned on the Army Public School badge,

“I shall rise and shine.”

The writer is a London-based affiliate of Jinnah Institute performing research on education in emergencies. She tweets @madeeha_ansari.