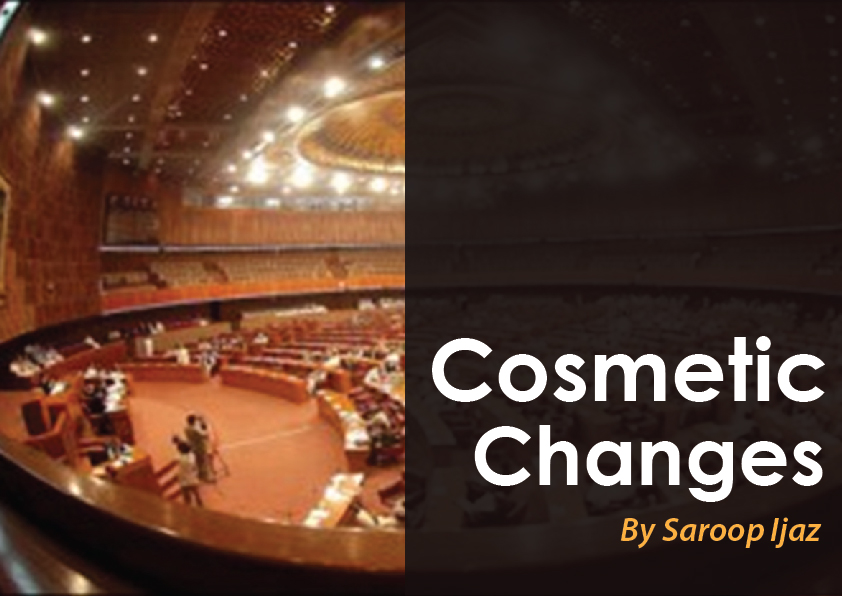 “Desperate times call for desperate measures” was a common refrain in the post 9/11 world, as security establishments across the globe geared up to supposedly combat unprecedented levels of terrorism. The main reason for deploying such clichés was to provide justification for enacting new laws which were aimed at fighting terrorism but were increasingly seen to be trampling fundamental rights in the process.

In Pakistan, the state has only just woken up to the need of grappling with the threat posed by terrorism, and has recently enacted a series of laws to provide legal cover to the country’s fight against asymmetric terrorism.

The need for such legislation has arisen due to the inability of the criminal justice system in Pakistan to adequately prosecute terror suspects. Since 1990, there have been 800 incidents of terrorism in Punjab alone, of which only 475 have actually been prosecuted. A total of 2,300 suspects were named in those cases and about 2,200 were arrested. Of those arrested, about 1,650 or 75% were acquitted by the courts due to “a lack of evidence” against them. Similarly, the Marriot Hotel bombing in Islamabad – one of the most horrific terrorist attacks in Pakistan’s history – initially had 83 witnesses to the incident; eventually none came forward to give evidence in court.

In order to tackle the twin issues of terrorism and law and order in general, as well as the abysmally low prosecution rate in particular, the state has enforced three significant new laws, namely, the Fair Trial Act; the anti-terrorism law amendments and the yet-to-be-passed Pakistan Protection Ordinance. The new and proposed laws seek to provide more freedom to law enforcement agencies to combat terrorism, yet they simultaneously conflict with the fundamental rights of citizens which are guaranteed under the Constitution. While no binary answers exist to the perennial security-versus-rights argument, all erring on the side of caution should ideally be directed towards ensuring that fundamental rights are safeguarded.

The Fair Trial Act, for example, has been drafted with the general intent of preventing acts of terrorism. This can be further bifurcated into two specific purposes. Firstly, to provide legal cover for evidence collected by investigating agencies through means otherwise considered illegal (such as wiretapping and internet surveillance); and secondly, to effectively employ these surveillance methods to prevent acts of terror. The agencies authorized to use these methods of surveillancecomprise the Inter-Services Intelligence, the Intelligence Bureau, the three military intelligence agencies and the police.

Officers from the aforementioned agencies can now approach the court for the issuance of a warrant authorizing the surveillance of the accused. Section 5 of the Act articulates that a warrant can be sought if the accused is “likely to be associated with or is beginning to get associated with” the commission of an offense. The language used is vague and open ended, allowing for almost any person in most circumstances to fall within its ambit. The judicial warrant, if granted, will be for an initial period of sixty days. However, Section 14 allows for such a warrant to be renewed indefinitely.

While seeking court warrants is in line with international best practices in such matters, there is one major impediment to the court making a fair assessment. In the absence of the person being monitored, the court only has the word of the agency to go on, with no independent means of verifying the details submitted to it.

These examples from the Fair Trial Act are not meant to suggest that the entire legislation be simply rejected; they are just meant to emphasize the fact that the breach of privacy is a colossal undertaking, hence it should be approached with extraordinary care and only under special circumstances.

Similarly, the discussion on surveillance in Pakistan cannot be divorced from its historical and political context, wherein earlier public examples of politically motivated surveillance have unfortunately demonstrated the subjectivity of the Act and the potential for its misuse. One solution may be found by following the United Kingdom’s model where the expenditure, related policies, administration and interception of private communications for national security purposes are monitored by a statutory committee. This is governed by the Regulation of Investigatory Powers Act 2000. The UK act also restricts access to intercepted communications amongstthe various authorized agencies. There is need for a similar regulatory mechanism in Pakistan along with a requirement for the agency requesting surveillance to credibly demonstrate that all other avenues have been exhausted, or are not possible, and that surveillance is the last resort.

Like the Fair Trial Act, amendments made in the Anti-Terrorism Act of 1997 through the Anti-Terrorism (Amendment) Ordinance 2013 also allow for the use of text messages, telephones calls, e-mails and other forms of communications as evidence against suspected terrorists. The new ordinance also allows the armed forces as well as the civil government to order preventive detention of any person involved in terrorist activities for a period of three months. This last provision in particular, prima facie, seems to be in direct conflict with fundamental rights.

The legal definition of “terrorism” in the original Anti-Terrorism Act 1997 and its interpretation has been so broad that a wide variety of criminal offenses can be prosecuted under it. As an example, many first investigation reports (F.I.R) for homicide contain the phrase “aur mulzim aslaha lehratay hoye khauf u haras phayla kar farar ho gaye” (the accused left brandishing weapon/s and creating terror) and on that grounds alone can be taken up by the anti-terrorism courts. This dilutes the intended impact of specialized legislation and courts.

Unfortunately, the new amendments, in many ways, make the same mistake as the original act. They ignore the fact that the non-enforcement of pre-existing legislation regarding the powers granted to investigating officers in the Criminal Procedure Code and Police Rules is a significant part of the problem, which is unlikely to be addressed by making new laws or provisions.

The latest attempt by the State to promulgate laws to counter terrorism is the Protection of Pakistan Ordinance (PPO). The PPO was approved by the President on October 20, 2013 and was presented in the National Assembly on November 7, 2013. The ordinance will only come in force after it is passed by the legislature. The preamble of the PPO describes it as protection against those waging war against the state and prevention of acts threatening the ‘security of Pakistan’.

The PPO however makes no such distinction and hence can be used for restraint of political activity. The Secretary General of the Human Rights Commission of Pakistan (HRCP), IA Rehman, has expressed similar doubts about the potential of the ordinance to be used as a legal tool to suppress human rights’ movements in the country. The ordinance also gives policing powers to the armed forces and civil armed forces, which is unusual as it takes away investigation in criminal offences from the domain of civilian oversight. The PPO also grants extraordinary andarbitrary magisterial powers to security officers, making them on-the-spot-judges by allowing them to exercise lethal force even when not in immediate physical danger themselves.

The preventive detention clause also allows the government to detain a person for a period of up to 90 days. According to the Universal Declaration of Human Rights, no person may be arrested or detained without due process. Furthermore, the ordinance potentially violates articles 9 and 10 of the constitution of Pakistan by permitting law enforcement officials to open fire on the suspicion of a scheduled offence, as well as allowing officials to arrest someone without a warrant based on “reasonable suspicion” alone.

The PPO attempts to give the impression that it is directed against an “alien enemy”, but anyone who is unable to prove his identity on the spot can be subjected to persecution under it. Moreover, the ordinance also shifts the burden of proof on the accused. For example, an accused facing a charge of being involved in committing a scheduled offence will be presumed to be guilty unless they can prove their innocence. This is clearly against the basic principle of natural justice where one is presumed to be innocent until proven guilty.

The governing principle in all three instances is that of giving more power to investigating officers and shifting investigative powers from the domain of the civilian or regular law enforcement agencies to, in most cases, the armed forces and intelligence agencies. Therefore, with efficiency and effectiveness being the prime considerations, the impact on fundamental rights (which may be overridden in certain instances) is inadequately addressed.

Despite the need for stringent laws to combat growing terrorism, the aforementioned legislative actions do not, in any significant manner, change the State and its criminal justice system’s approach towards terrorism. Most of the powers granted under these laws are already exercised by military/civilian forces in varying degrees. Hence, apart from legalizing them (which has some value), these changes achieve little else.

The problem with new legislation, particularly in times of conflict, is that it can be a cop-out. The State feels that it has at least done “something,” and waits for results to pour in as it rests on its laurels. What is more problematic and dangerous is that these new laws have not made the State any safer from terrorist threats; ironically, they have left the citizenry with even fewer rights than it had before.

By taking away or even limiting fundamental rights, the State takes it upon itself to justify such a move, and it should be able to clearly list the objectives that will be achieved by it. Many provisions in these laws, however, fail this test.

The confusion is compounded by the fact that the drafting of these laws has preceded the formulation of a national security policy.

Laws, particularly those enacted in the fight against terrorism, should be geared towards one policy and one narrative, and certainly not the other way around. The problems of capacity building, institutional co-ordination and national narrative will not be solved merely by legal reform, let alone legal reform as feeble as this.

The writer is a high court advocate, partner at Ijaz and Ijaz Co, and a columnist.