Courage in the Face of Great Adversity 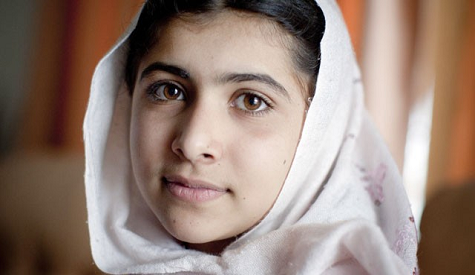 Malala Yousufzai has helped Pakistan remember what courage in the face of great adversity looks like. She has helped remind our fractured nation that there are still some lines that we agree should not be crossed.

On October 9, gunmen sought out, identified and shot one of Pakistan’s bravest 14-year-olds. The brutal and calculated attack, claimed by the Tehrik-e-Taliban Pakistan, has shocked the country. The victims’ only crime was campaigning for girls to have access to education.

Head covered with a white chador and eyes alight with a mix of determination, laughter and mischief, Malala Yousafzai inspired countless people in her community to resist the forces of extremism by continuing to go to school at a time when the Taliban, in control of her native Swat, had declared girls’ education un-Islamic and started destroying girls’ schools.

What makes Malala’s story even more inspirational is the fact that she is an ordinary girl. The daughter of a school teacher, she was not born into privilege, wealth or a position of social influence. Other than supportive parents, Malala had no resources to make her journey easy. Her appeal lies not only in the profundity of her mission or her persistence but also her humble roots, her visible Pakistaniat and her zeal to make a difference without shunning her own culture.

Even in a largely conservative country like Pakistan, Malala is easy to love and admire.

Divided across multiple allegiances, the convergence of condemnation and anger against Malala’s attackers in Pakistan is unusual. The rage and shock experienced by Pakistanis of all political and religious dispensations is unprecedented. So profound is the realization of the injustice done to Malala that even traditional foes are overlooking differences to speak with one voice to demand justice for her.

The attack has reminded Pakistan of the dangerous enemy that grows within our borders and has to be dealt with. Unfortunately, there is still no consensus on who it is and how to deal with it. The Pakistani Taliban have claimed responsibility for the attack, but Pakistani opinion remains divided on the identity of the attackers. Some believe the attack is a product of the militancy and anti-American sentiment fanned by drone strikes in tribal regions. Others blame the state for supporting and nurturing militant groups as strategic assets. Some support dialogue with Malala’s attackers while others ask for eradication by force.

As we begin to drill down into the details of where Pakistan goes after this attack, we find discourse in Pakistan disintegrating into political point-scoring and ideological posturing. It is critical for Pakistan to remember that Malala’s battle with life and death mirrors the existential threat faced by Pakistan. This incident brings into sharp focus our lack of a democratic and transparent counter-terrorism strategy. It highlights the need for a counter-extremism strategy. Despite ten years of terrorist attacks on Pakistani citizens and soldiers, we are still wondering how best to respond to them.

The aftermath of the attack on Malala reminds us that large swathes of the Pakistani population remain sympathetic to the cause of the Taliban. While they may support punishment for Malala’s attackers, they do not support clamping down on the ideology that sanctions shooting an unarmed girl because she defies its twisted interpretation of religious edicts.

Some political parties and leaders refuse to name the “Taliban” in their condemnations. Religious leaders have also refrained from naming and shaming the group that took responsibility. They have not helped rally public sentiment against the TTP like they did in response to the blasphemous film or like they did in support of Salman Taseer’s murderer.

Rapidly disintegrating public voice is testimony to Pakistan’s lack of effective leadership that can unite public opinion and implement strategies to ensure that the state of Pakistan prevails against extremism and militancy. The poverty of courageous and inspirational leadership underpins Pakistan’s spiral into militancy.

As the nation prays for the safety of Malala, it also wishes that those in power in Pakistan could remember the brave 14-year-old girl from Swat who resisted and prevailed against an enemy much bigger than her; so that they might find within them the courage to defend the ideals that she took a bullet for.

Malala fights for her life today because none of us possessed even a fraction of her courage and perseverance. We, as a nation, owe it to her to change that.

The author can be contacted on sehar.tariq@xts-asi-lji.azurewebsites.net .