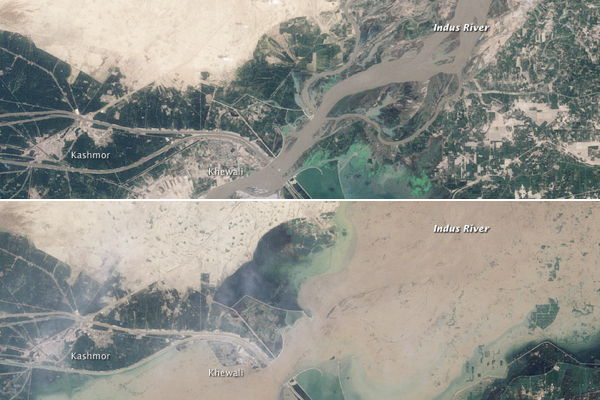 Six months after the devastating floods hit Pakistan, early evaluations of the crisis indicate that the challenges are far from over, and that resources are drying up. The United Nations estimates that 20 million people were affected, of whom 14 million needed immediate humanitarian assistance. The floods that inundated the Indus basin, from Khyber-Pakhtunkhwa to the Sindh delta, destroyed 1.6 million homes and cost direct and indirect losses worth $10 billion, half of which were borne by the agricultural sector.

It is immediately apparent that the floods aggravated underlying and chronic vulnerabilities to make this the largest disaster in Pakistan’s history. Early evaluations suggested that encroachments on the river beds, illegal embankments, excessive logging and mismanagement of waterways contributed to the scale of the flood that left a fifth of the country’s landmass inundated with water, some of which has yet to subside in the low-lying areas of Sindh. The millions of people affected, particularly in Sindh and Balochistan, generally belonged to lower income groups. Before the floods, 45 million people in Pakistan suffered from severe food insecurity, and 40% of infants under the age of 5 were underweight.[1] In such a landscape, this disaster was more than enough to tip millions of people into the severely food insecure category, and resulted in high rates of acute malnutrition amongst children and mothers in relief camps. Finally, the civilian institutions set up to deal with disasters – such as the District Disaster Management Authority (DDMA) – suffered from a lack of funding and neglect; local governments stood dissolved, and the state structure at the provincial level proved to be woefully inadequate in most cases.

The Government of Pakistan announced an end to emergency relief operations in most areas on January 31st, 2011. Aid workers warn that cutting off aid suddenly may have a negative impact on recovery.  The lack of population tracking data, in particular, makes it difficult to follow up with affected populations and measure existing needs of IDPs. The government is, however, providing seeds and fertilizer and temporary shelter where necessary. Additionally, it is expected that the next tranche of cash grants amounting to Rs.80,000 will be released within the next six months through the Watan card system.

The Pakistani government isn’t the only one facing constraints. In November, WHO, Unicef and UN Habitat warned that if funding needs were not met, they would be forced to scale down operations. Less than half of the $2 billion request by the Floods Emergency Response Plan has been met, and sectors such as nutrition and shelter remain badly under-funded.

Aid agencies are now focusing on measuring aid efficacy in the last six months, and on planning sustainable growth for the next six months and beyond. Part of this process, namely that of “building back better” for 2011 and beyond, will require key investments from the government.  Structural weaknesses in environmental and disaster management, social support programs and healthcare will need to be addressed.

According to a January 2011 report by Oxfam, Pakistan cannot overcome poverty and the perpetual risk of natural disasters if it does not target “identity-based inequality – historic, generational exclusion based on gender, religion, ethnicity and other socio-economic indicators.”[2] Even less ambitiously, if the government were simply to plan for the monsoon season ahead, it would need to take the lead on repair and reinforcement of “hardware” – rebuilding damaged dykes and waterways – and building the capacity of District DMAs. The NDMA itself does not have implementation powers and can only make recommendations to the executive; observers say that the sluggish release of funds and the inability (or indifference) to rapidly mobilize resources is delaying the repair of waterways.

The official target for this year’s wheat production is set at 25 million tonnes, which is a record high. The FAO’s estimate is somewhat lower than last year’s output of 23.3 million tonnes, which is above average for the last four years. While wheat production may fall in some flood-affected areas in Southern Punjab, reports indicate that in Sindh wheat plantings will increase. Damaged irrigation infrastructure that threatened to lead to production losses will be compensated by improved fertilizer and good quality seed supplies during this season.[3] Rice, which was at peak growing season when the floods hit last year, is the worst affected, with the projected output at 38% lower than last year.

Agricultural output is only part of the picture. Like the varied nature of the disaster, recovery is also disproportionate. While overall food security has remained stable, food prices have gone up, exacerbating existing inflation. In particular, fruits and vegetables have moved further out of people’s reach. According to Oxfam, farmers, like small businesses and laborers, will struggle to recover until the credit market is rehabilitated and farming is possible. Anecdotal evidence suggests that even cash grants disbursed via the Watan card are being used to pay off debts, instead of generating livelihood recovery as they are intended to.  Along with the repair of irrigation systems, it is essential to put into place subsidies for agriculture that are aimed at small farmers. Humanitarian aid reports also recommend that achieving food security is contingent on prioritizing wheat for local markets, and not for export.

The way forward: a national plan for rehabilitation

When NDMA announced that it would be taking over from UNOCHA post-January 31st, 2011, many donors and stakeholders were caught off-guard. Local non-profits struggle to maintain their presence in the field due a lack of resources, while UN agencies continue to play a critical role in providing medical facilities, shelter and water and sanitation to affected populations. The timeline for the UN OCHA withdrawal, originally in sync with the Flood Emergency Response Plan, which runs until August, was cut short by the government’s decision to take over from the coordination agency.

“We’ve been criticized for the ‘cluster system’,” says head of UNOCHA Manuel Bessler, “and we’ve learnt important lessons on coordination of mega-disasters such as Pakistan and Haiti. The system has limits, but I don’t know if anyone has come up with a better alternative.”

The UN’s Office for Coordination of Humanitarian Affairs came under severe criticism for its slow response and for the unwieldy, bureaucratic cluster system which separates the humanitarian response by service areas. However, the request for pull out brings up many challenges, including the handover of knowledge, skills and infrastructure to the Provincial DMAs and DDMAs – some of which have barely been established. According to Mr. Bessler, there is no ideal timeline for handing over a task of coordination, but “it should be determined by the situation on the ground, not by political and economic agendas.” The problems are not, however, entirely endemic to disaster agencies. Since the beginning of the disaster, the UN and its agencies have struggled to identify key persons – or counterparts – in the government with whom to work. The lack of clearly defined hierarchies of responsibility between the NDMA, PDMA, the Pakistan Army and the civilian government led to much confusion and overlap.

At the same time, insiders within the NDMA argue that with the end of the “relief” phase, OCHA no longer has as large a role to play, and that UNDP and NDMA can take over the task of coordination. The transition is complicated by the overall lack of resources in the economy and the debate on how to allocate them; these decisions, however, do not grab headlines or public attention. Instead, the post-emergency recovery and rehabilitation period is hampered by the reluctance of political parties to see the urgency in prioritizing a recovery plan. Economist Asad Sayeed notes that “rather than pushing the government to come up with a plausible and transparent reconstruction plan, the ruckus has been around the need to tax.” The dwindling media interest in the issue harkens at a larger myopia of the urban population, which remained largely unaffected by the floods. This crucial loss of public interest and investment is as dire as the overall slacking-off of humanitarian aid. For some observers, such as Dr. Sayeed, the floods were initially used as a stick to beat the government with, without recognizing serious achievements in providing humanitarian relief to a vast population during difficult economic times. Six months on, there are few incentives to hold the government accountable.

In such circumstances, the revenue available for recovery and reconstruction is rapidly drying up.  The government’s task of preparing for the next monsoon season is mounting, as dykes remain damaged and water channels remain clogged. It is likely that even if the economy struggles through this season, at the cost of millions of lives that remain at risk, the long-term challenges of the flood will remain inadequately addressed.

This material does not reflect the views of the Jinnah Institute, its Board of Governors, Board of Advisors or the President. This material may not be copied, reproduced or transmitted in whole or in part without attribution to the Jinnah Institute (JI). JI publishes original research, analysis, policy briefs and other communications on a regular basis; the views expressed in these publications are those of the authors alone. Unless noted otherwise, all material is property of the Institute. Material copywritten to JI: Copyright © 2010 Jinnah Institute Pakistan under international copyright law.