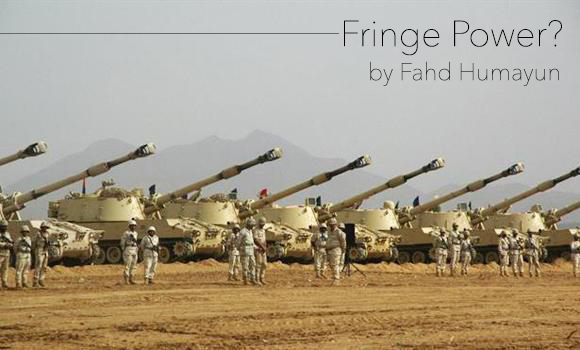 As large tracts of Iraq and Syria hover between Westphalian meltdown and militant takeover, policy pathways for Pakistan in the Middle East remain piloted by Islamabad’s foreign policy equation with Saudi Arabia, even as the current leadership earns accolades for attempting to mediate a difficult Riyadh-Tehran standoff. The mixed messaging sent out by Pakistan’s official high-level participation in Operation North Thunder in the deserts of the Saudi-Iraq border last month, while choosing to stay the course by staying out of the war in Yemen, shows that the fog surrounding Islamabad’s Saudi policy has yet to lift.

This is unhelpful, and worrisome, given recent events. While a negotiated end to the war in Syria is still a long way off, new bloc formations are dangerous destabilizers that will undercut attempts to finding mutually acceptable solutions to regional fighting. At a time when rudderless nations can benefit from statesmanship and direction, Riyadh’s exclusion of Iraq, Syria and Iran from participation in Operation North Thunder speaks to a Saudi foreign policy that remains exclusionary, retrogressing back to an alliance-system that divides more than it unites.

Five years since the Arab Spring, the regional premium on hard power as the foreign policy commodity of choice has thrown up important new realities in the Middle East. This includes a depression in Saudi Arabia’s international stock, fostered by dwindling oil prices and matched by the dawn of a more self-assured, globally savvy Iran. But as Iran goes from underdog to heavyweight, its rise will only increase Riyadh’s insecurity and regional vexations. Iran has over three times the population, a much stronger industrial base vis-à-vis Saudi Arabia, and powerful military with twice as many soldiers. This, in turn, is compelling Riyadh to project power in a more assertive and militarized way, evidenced by the ongoing intervention in Yemen, tactical moves to shore up the Al-Nusra Front, the staging of multi-nation war exercises in the region, and most recently, the execution of a Shia cleric, all choreographed to communicate political and military capability.

Saudi soft power, meanwhile, is taking a hit. According to one estimate, Saudi Arabia is said to have spent $100 billion on forging linkages with intelligence and cultural agencies in the Muslim world. But following the storming of the Saudi embassy in Tehran, only four countries – Bahrain, Djibouti, Sudan and Somalia – rallied to break off diplomatic relations with Iran. The reputational costs incurred from the international backlash to Wahhabism have also stung Riyadh, crucially offering Pakistan a window to pivot its relationship with Riyadh on increased transparency and an unequivocal commitment to domestic national security, with its 20-point National Action Plan as a firm foundation for engagement. While Pakistan has always had to pay a price for preserving the strategic relationship with Saudi Arabia, democrats in Pakistan’s parliaments are increasingly resisting Riyadh’s puritanical regional pull. Two years into a major terrorist cleanup, now is as a good a time as any for the Interior Ministry to isolate Riyadh’s links to local clergies, and implement a blanket ban on street rallies in favour of either Saudi Arabia or Iran.

Even as Pakistan navigates the narrow road between neutrality and non-intervention in the Middle East, it is inevitable that Saudi Arabia’s own internal undercurrents will spill over into Riyadh’s engagement with South Asia. The first effect will be that as Saudi Arabia’s perception of its own insecurity increases, so will Saud efforts to export software and hardware, given how closely the Kingdom relies on the propagation of religious ideology and brand to legitimise leadership not just at home but more widely in the Muslim world. This will make it all the more necessary for Pakistan to take measures, both diplomatic and domestic, that turn off the tap of Saudi funding feeding into refugee camps and charity outfits across Pakistan, while ensuring that amplified Saudi messaging doesn’t fuel extremist tides at home. This will also mean monitoring finances entering Pakistan indirectly via Kuwait, long considered one of the most permissive terrorism financing environments in the Gulf.

The second change that will be felt in the Pak-Saudi dynamic has to do with the Saudi-Iran power differential: as the gap closes, Saudi Arabia will look to allies to compensate by encouraging bandwagonning. In other words, as Riyadh exports brand and coalesces capital, it will also look to import alliances and regional guarantees to offset any perceived strategic imbalance. The 35-nation military alliance against Daesh is exactly that: an attempt to artificially construct powerful new platforms from which to exercise Saudi leadership, and demonstrate geopolitical hegemony. The Hafar Al-Batin war games had a similar endgame: to help build the ‘inter-operability’ of the Saudi armed forces with its allies, so as to facilitate coordination and overcome multiple language barriers, military equipment, and operating systems. This would seem to suggest that Saudi Arabia will be banking on more, rather than less, regional support in the coming months, ostensibly to counter American retrenchment in the Middle East, and possibly including a deal with Pakistan that commits the Pakistani Army to a long-term training program for the Saudi armed forces. This quid-pro-quo dependency requirement also means that Saudi Arabia may start looking beyond a Pakistan that is attempting to exit Riyadh’s gravitational orbit: Prime Minister Narendra Modi’s visit to Riyadh this weekend may signal an important new Indo-Saudi axis of cooperation as the Kingdom looks to diversify friends and allies, especially as Pakistan attempts to do the same. President Hassan Rouhani’s visit to Islamabad, the first by an Iranian head of state to Pakistan in 14 years, as well as calls to upgrade the Pak-Iran relationship into to a more durable, and functional, counter-terrorism partnership, are unlikely to have gone unnoticed in Riyadh.

For Pakistan, this means that as the Middle East careens from conflict to crisis, visits by members of House Saud are likely to go up, not down. It also means that the next time Riyadh comes calling, Pakistan will have to sustain its newly asserted foreign policy independence beyond strategic ambiguity, and disingenuous policymaking. A key way of doing this is by keeping its lawmakers debriefed, rather than in the dark, on national security and foreign policy choices in the Middle East. Convening the National Security Committee ahead of the 13th OIC Summit scheduled to open in Turkey on April 10 can also help create guidelines for engagement.

Climatic foreign policy shifts are difficult to choreograph, but when it comes to the Saudi relationship, it is especially important that Pakistan layer foreign policy choices with nuance, and separate what it sees as ‘shared interests’ from ‘shared values’. While a shrinking common denominator with Riyadh may be a good thing for Pakistan’s own battle against militancy and extremism, it will not necessarily bode well for stable geopolitics, and will almost certainly be resisted by a still-powerful, increasingly militarized monarchy in Riyadh.  Even without Saudi Arabia as a guarantor of regional stabilities, either in the Middle East or in South Asia, the Kingdom will continue to look to fall back on Pakistan and other players to project power – hard and soft. Pakistan needs to decide if it will be there to catch it, when it does.