From Journalism to Jingoism 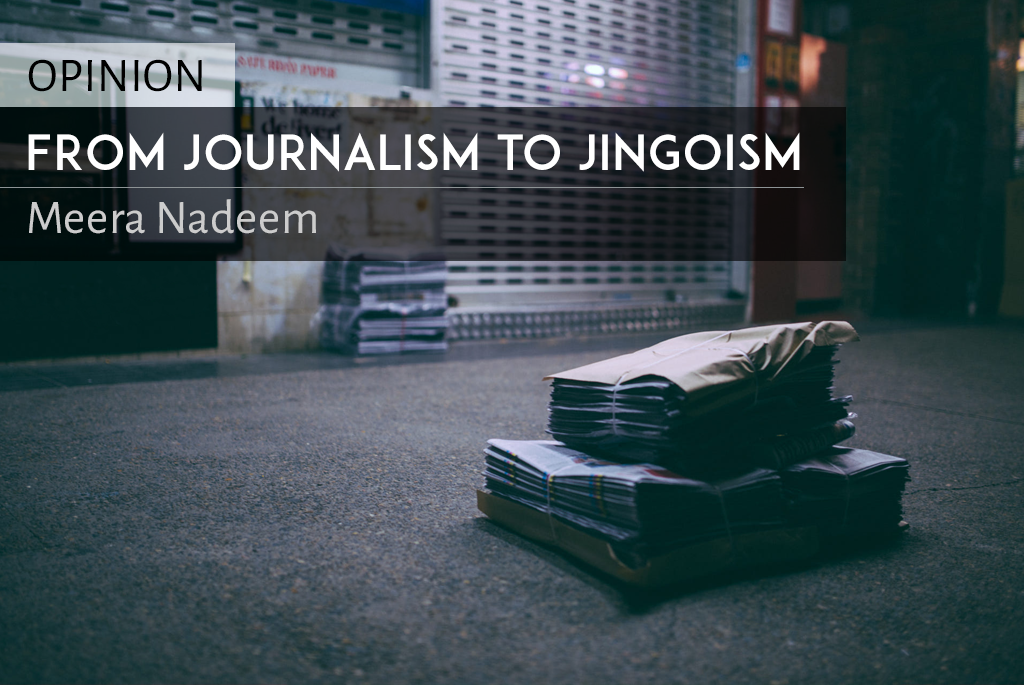 Prospects for dialogue between Pakistan and India now appear bleak as the two nuclear armed neighbours faceoff in what is perhaps the worst diplomatic bilateral stalemate since 1971. Accustomed to setbacks, the new normal in this bilateral relationshipis a media fueled militaristic ultra-nationalism in India that is shrinking public appetite for normalization with Pakistan.

Backed by the war mongering of a BJP led government on the brink of a contested election, India’s media has let the drive for ratings hijack fact based journalism. Indian media has played a significant role in advocating for escalation, relying on spurious leaks by ‘sources’ and a misrepresentation of facts.From the outset, India’s media has jumped to accusing Pakistan of direct involvement in Pulwama, vowing to avenge and isolatePakistan and sounding the drums of war. While Pakistan’s offer of investigation and attempts at de-escalationhave met with radio silence, jingoistic news channels in Delhi have built studio war rooms discussing military tactics, and ostracizing analysts, journalists and politicians who have shunned war hysteria and raised hard questions, calling them ‘anti-national’ and ‘pro-Pakistan’.Pro-dialogue campaigners such as Arundhati Roy, Sudheendra Kulkarni, Mahbooba Mufti, Farooq Abdullah, and Navjot Singh Sidhu who have cautioned against war have become targets of a media hate campaign. A consequence of the media’s militarism has been a rise incommunalism with widespread attacks against Kashmiris across India, with students, doctors and shopkeepers being denied residence and attacked by frenzied mobs.

Pakistan’s successful conventional response to India’s miscalculated strikes in Balakot has not only taken the world by surprise but also caught India’s newsroom generals off-balance. With greater civil-military coordination and parliamentary support, Pakistan’s timely dissemination of information during the crisis backed by images and video proofs has helped set a balanced and fairly factual account of events. The international media too has called out Indian claims of heavy casualties in Balakot. In India however, even seasoned journalists have refrained from asking the hard questions from a government that has itself retracted earlier claims of 300 casualties In the 26 February attacks.

Problematically, even seasoned Indian journalists hitherto known for balanced reporting have blatantly endorsed the hyper nationalistic war rhetoric, legitimizing their media’s jingoism. Corporatized news channels and their famous faces are not just mouth pieces of the BJP government, but are in fact a force of multiplication, on a mission to drown out other voices and spread xenophobia.Ahead of the Indian general election, social media companies like Facebook and Twitter have stepped up their efforts towards curbing hate speech, trolling, and fake news.The BJP government is not new to such scrutiny as a political partythat employs an entire ecosystem supporting fake news and thrives on hyper nationalism. In the process, most media houses have lost their credibility. Instead, what this collective jingoism and smear campaign has done, is that it has brought to the fore atrocities being committed in the Kashmir Valley creating international headlines.

On the citizen level, the manifestation of this negative politicking has amplified hate on social media platforms like Twitter.Theinordinate praise for the IAF after their alleged surgical strikes 2.0 and calls for teaching Pakistan ‘a lesson’ has led to India’s twitterati taking an extremist, pro-war stance in the garb of patriotism. Pakistani Twitter on the other hand has painted an opposite picture denouncing war and calling for sense to prevail on both sides of the border.

In Pakistan, a moderate approach to the crisis has furthered a genuine desire for dialogue and normalization with India. From carrying outa calculated military response to India’s aggressive and misguided action, to releasing the captured IAF pilot Abhinandan, andcontinuing with the Kartarpur opening, Pakistan has demonstrated its resolve to defend itself while promoting de-escalation.This is not new. Since August 2018, Pakistan has unconditionally offered dialogue to India in keeping with political consensus on improving bilateral relations. Pakistan’s balanced yet resolute approach has resulted in global powers shifting their stance from pro-preemptive strikes, to one calling for de-escalation in the region.

While war, even a limited one, between Pakistan and India is no longer imminent,the region is not in the clear just yet. The upcoming Indian election and the (possibly) new government in India will determine the fate of a bilateral relationship on tenterhooks. Till then, Pakistan continues to go to sleep under a blanket of roaring Air Force jets patrolling the skies, ready to defend against another misadventure from across the eastern front.